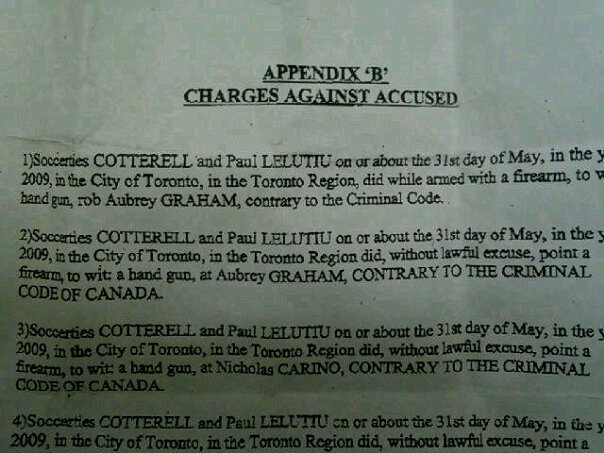 Odawg DaMenace was one of the people who commented on this picture and I believe he has some good and valid points.

“Yo Paige why u put the mans business in the street like that?
Tell the whole story if u gonna post the shit up too tho.
He got robbed cause he fucks wit hood chicks and she set him up, he took of driving in his Range speeding and the feds seen him. Pulled him over and he was still bummy from the whole shit that went down cause Drake ain’t a hood nigga and he never claimed to be. The bitch now starts running her lips to the feds and then the feds sent out a APB for the dudes.

I don’t condone wat happened wit the feds but we all know Drake ain’t a shotta and dude is jus a talented individual. He grew up in forrest hill for christ sake. Plus he didn’t go to the trial he had shows to do/ contractual obligations.”

According to Bishop Brigante on HHC Forum

Drake was at the restaurant. Got robbed at gun point and the dudes got caught at or close to the scene of the robbery. the restaurant people called the cops and when they arrived he was there as a dude who got robbed. they caught the guys and they were charged. there is not one thing on this document that says “Aubrey Graham also informed us that the culprits were so and so and from such and such. and they are involved in these activities that are illegal. etc. ” all it says it that there are charges against these 2 guys for a crime they committed against Drake. That’s all.

You might be wondering, who the hell is page?

In my personal opinion I believe the tension started brewing when this song blew up and Page didn’t get the recognition he deserved. People are taking this snitching thing out of control.

This is a publicity stunt by Page that will get attention for the moment but it can very well go wrong for Page and be a positive thing for Drake.

That would piss of Page even more!! hahaha.