[Video] Masia One – “Montreal in the Fall” 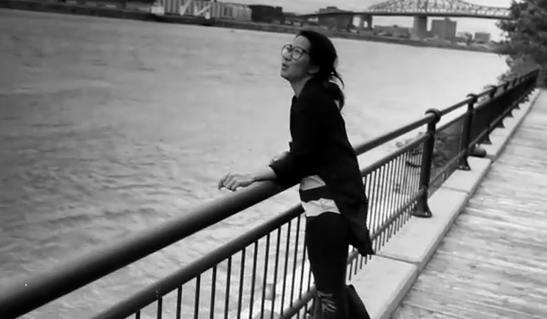 In a café on St. Denis two days back, my friend casually introduced me to someone as a “musician who writes about hip hop.” I was already well prepared for his reaction, as he passed me an inquisitive glance across the table and past my open laptop at my long and tussled sandy blond hair, my neutral clothes of linen and silk, my oversized JNY wool jacket, Mountie-style leather boots, and the earthy jewelry that hangs all over me. After gathering it all in, he looked me square in the eye and said, “never would have guessed.”

I used to dress the hip hop “part” back in highschool, with a wardrobe full of Rocawear, EnYce, and … yes … even Baby Phat. But now more autonomous, a bit older, and less enthused by the prospect of wearing (and paying for) a logo across my chest, I’m happily unbound by any one sort of style and instead just kinda wear what I like in the same way that I listen to what I like and, generally, do whatever the hell I like, regardless of whatever other people–or even myself– might expect me to do.

I’m used to defying people’s expectations based their cultural understandings of image and impression. It’s the beauty of our mosaic Canada that makes that possible. But as much as I think about this kind of stuff (thanks a lot cultural theory!), I still found myself in the sneakers of the dude in the St. Denis coffee shop when I first saw this eye-defying video from the Singapore-Canadian emcee Masia One. Masia’s trench coat, her nautical striped shirt, the amazingly nerdalicious specs she’s wearing– what about her style signifies hip hop (at least in our narrow, Americanized conception)?

Not a lot. And that’s why I love it. Style aside, Masia One is on the rise as an acclaimed emcee, having being the first female to be nominated for a Much Music Video Award (Rap). Her most recent album PULAU has reached no. 2 on CBC Radio 3’s Top 30, and she has scored a deal with the  LA based label Kops & Robbers (curiously non existent on the i-net) with whom she is set to release an album with production from Dr. Dre’s beat whiz Che Vicious and features from Talib Kweli, RZA and Graph Nobel. Oh, and she has a degree in Architecture from U of T.

I think it was MaG that said “I just be me because being someone else is boring.”  I’d venture to argue that it is Masia One’s ability to stay real to herself has made her one of the more intriguing new artists out there. What’s that little saying about Proof and Pudding?