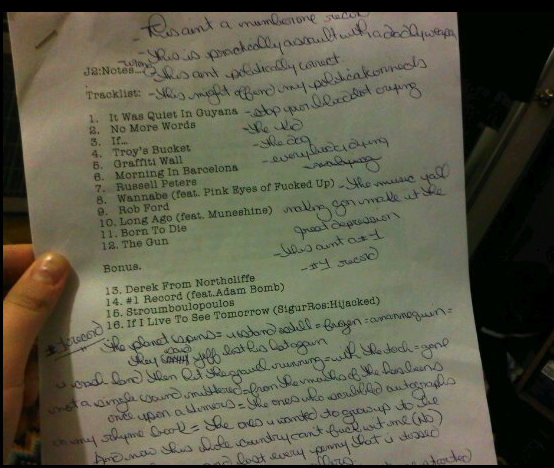 D-Sisive’s fourth full length solo album Jonestown 2 with production from Muneshine has been in the works for a while. But with all the other things Derek has had going on over the past year including his name change from D-Sisive to Derek from Northcliffe (which hasn’t really caught on), his recent Juno Nomination for Rap Recording of the Year for Vaudeville, and his RapCity appearance which was followed by even more interesting subsequent performance with Fucked Up frontman Damian Abraham on The Wedge, Jonestown 2 hasn’t really been allotted all the attention it deserves.

To reconcile, today we ponder D’s Jonestown 2 tracklisting (shown above in his ornate scrawl) and view his conceptually elusive album commercials of which there are thus far two installments. Beer cups are tossed, words are at a loss, and someone’s balloon has been bursted. Stay tuned for the February 22 release date and click below to check them out.