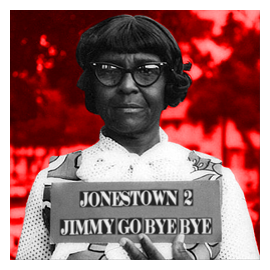 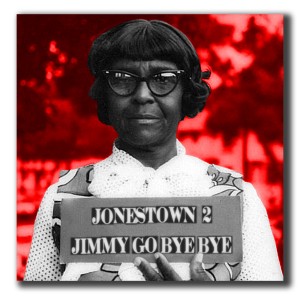 The album’s opening track “It Was Quiet In Guyana” begins like its Jonestown predecessor. An acapella of a man singing a gospel tune breaks into an eerie sample of Bob Dylan’s “Ballad of a Thin Man” which ends with him singing: “and something is happening here but you don’t know what it is, do you Mr Jones?” A minute in, you can finally hear D-Sisive speaking over sounds of birds and wind blowing, describing the Jonestown Suicides. A very dark opening, dark indeed.

The next two tracks, “No More Words” and “If”, have been circulating the internet for a while. In “No More Words” D-Sisive declares he’s going punk like Johnny Rotten of the Sex Pistols, and in the following track he follows through, sounding like a snobby punk by comparing himself to famous rappers and wondering why he doesn’t have the same level of success as others. Both tracks have amazing production from Muneshine and are worth repeated listens.  Interestingly enough, D-Sisive shows a new level of self awareness in these songs as well, referencing and quoting his own earlier tracks (for example The Book’s “Story of An Artist”) while still making it sound fresh.

Two more upbeat tracks follow, “Troy’s Bucket” and “Graffiti Wall”, which are pretty much straight boom-bap rap tracks. There’s a sweet break in “Troy’s Bucket” that reminds me of GZA’s “Liquid Swords.” The chorus to “Graffiti Wall” is pretty funny, taking shots at conventional rap imagery, “In front of a graffiti wall/one hand on my chin, one hand on my balls/no smile on my lips/smiling’s for poonanis kids.”

“Morning in Barcelona” follows and the romantic side of Mr. Christoff is exposed as he asks, “how did a nickel like me, get a dime like you?”

“Russell Peters” is a great introspective track. It’s reminds me a bit of “1974” from the original Jonestown, as both revolve around the rapper’s relationship with his deceased father. It’s definitely a standout on the album, and D-Sisive’s tone matches the beat very well.

The next track, “Wannabe”, features Pink Eye (Damian Abraham of Toronto indie-punk band Fucked Up.) The song, recorded on live television (Much Music’s The Wedge), is frenzied to say the least. Live drums over a pulsing synth line makes this song’s beat hit hard. Pink Eye’s rap skills are interesting to say the least, as he shouts “if Jesus is risen, then we’ll kill ‘em again” and gives props to Jello Biafra and Franz Kafka respectively.

Another album stand out is “Rob Ford” which is named after the Toronto mayor that the core of city doesn’t really like. After seeing clips of its performance on Much Music’s Rap City, I was very intrigued about this number. His tone of the track can only be described as a dark bravado as he declares “Imma sell my soul for a song that will sell out the (sky) dome.” Laced with hip hop and pulp culture references and clips of William S Burroughs this track deserves multiple listens. In each verse, D-Sisive claims to change the game like bullets going through Notorious BIG and 50 Cent. Oh, he also declares war on the mayor.

Next comes “Long Ago”, which features Muneshine. D-Sisive tears this beat apart saying “I’m going after the gold/and after that the platinum.” He uses relates himself to cult leader Jim Jones, saying he’ll serve his fans “a glass of lip smacking delicious cyanide mixed with a full packet of red powder.” Muneshine’s verse was solid as well, speaking about how he grew up “on Degrassi and Jonovision.”

The production on “Born to Die” is really crisp. D-Sisive reflects on the meaning of life on this track and makes reference to his substance use.

“The Gun” is very reminiscent of B.I.G.’s “Suicidal Thoughts”. D-Sisive mumbles hauntingly about carrying a gun and he sounds like a psychotic killer. He finally starts raging on those who have done him wrong, including: critics, people who robbed him and his brother in law. He concludes the album with a fictional suicide, which may be fitting, because he said earlier that Jonestown 2 may be his final release under the name D-Sisive.

One of my favourite songs from this album is the bonus track, “Derek From Northcliffe.” D-Sisive acts jokingly while reminiscing on his childhood. Funny interjections like “I don’t say yo enough in the beginning of songs,” and “this song makes me wanna reminisce!” make the track all the more enjoyable.

All in all, this is a great release, and is definitely one of the best Derek Christoff/Orville Knoblich/D-Sisive has released. To be quite honest, this is one of the few times that I’m ashamed to download an album for free (and I torrent like a fiend.) D-Sisive branches out more on this release, and I believe that he is gaining more confidence in his art. No longer is he simply introspective and mopey, but he is developing his own unique sense of pride and bravado.

It just seems tight and well put together. That just may be the production by Muneshine, but each beat seems to fit the rapper well. Stylistically, I think that his flow has improved on this album too. In his earlier releases there would sometimes be awkward phrases, but on Jonestown 2 his lines seem to mesh better. All in all, a great release, and this may be one of the rare times when the sequel is better than the original.