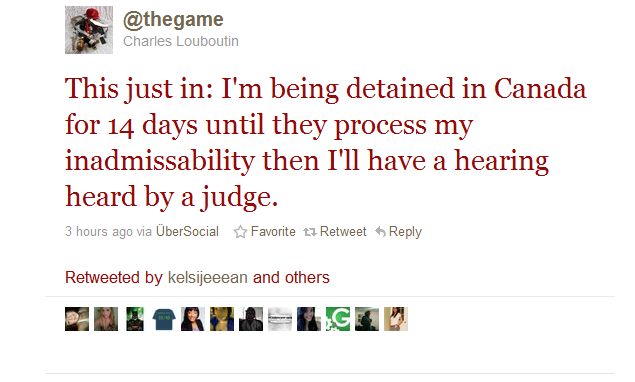 I couldn’t believe this when I was looking at it from my phone, I was really excited for the concert because I’ve never seen Game live before. I would like to thank The Substance Group Entertainment for realizing an amazing like The Game to bring him to Canada. It would have definitely be an exciting tour and I know Halifax was excited for The Game tonight on 4/20.

We as the Canadian promoters for the “Red Nation” tour featuring hip-hop artist The Game, completed all necessary work permits and paperwork to allow him entry into Canada.
However, while The Game was flying to the first scheduled tour date on April 19th 2011 we were informed credible evidence had been obtained by Canadian customs to allegedly prove The Game is a member of the notorious gang The Bloods. Based on this intelligence they received – combined with his alleged association to organized crime – Canadian customs declined him entry into Canada.
The past criminal history of The Game was never addressed in conversation with Canadian officials and at no point was that the issue for his denied entry. Customs insisted the reason was strictly his current gang affiliations.
At this point we made every attempt to speak with custom agents in both Ottawa and the point of entry to see if anything could be done to reverse the decision, including putting up a bond. We were informed we could not do that either. Based on Canada’s privacy laws, customs officials could not discuss the details of the matter and that the case was closed once a decision was made.
Contrary to social media reports, The Game is not being held in Canada. For further questions regarding his whereabouts, we suggest contacting the Canadian customs office.
About The Substance Group
Established in 2003 by Neil Forester, The Substance Entertainment Group is a three-tiered company acting as one of Canada’s largest Concert Promoters, Events Producers, and a Booking Agency specializing in club shows, concerts, radio festivals, celebrity after-parties, red carpet events, fashion shows, MMA events, comedy acts and much more. Based out of Toronto, The Substance Entertainment Group has branched it’s operations and clients across the globe by working with esteemed venues and promoters, producing over 1500 concerts since its launch, some attracting an audience of over 20,000 people, and successfully bringing to Canada some of the world’s top acts such as Justin Bieber, The Black Eyed Peas, Akon, T-Pain, Lady Gaga, Bun B, Kanye West, Steve Aoki, Far East movement and more.