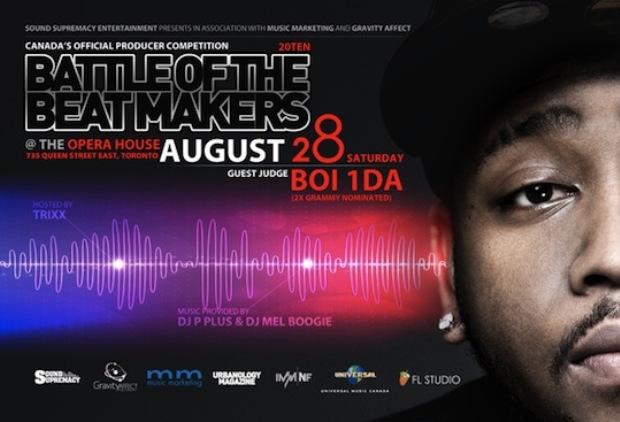 [Event Coverage] Battle of the Beatmakers 2011 & The Wonder Year 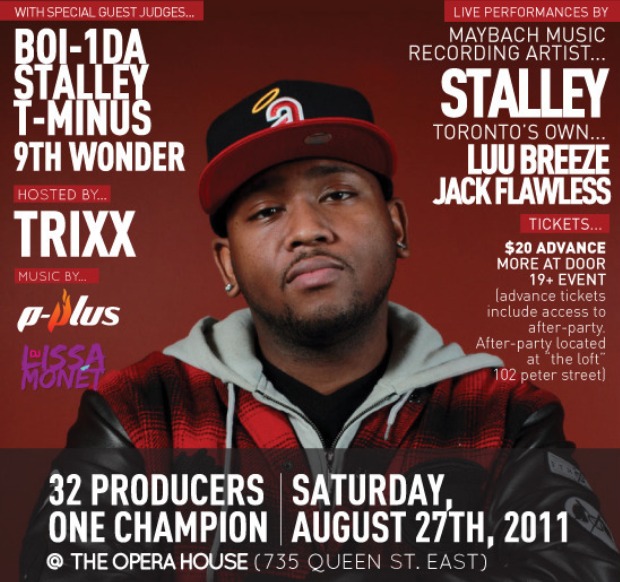 Toronto has been heaven for a hip-hop fan in recent weeks. The city was the place to be for aspiring producers two weekends ago due to Sound Supremacy’s Battle of the Beatmakers programming.

The 2011 competition went down last Saturday at the Opera House, as 32 producers went head-to-head for a chance at $1000 cash, a feature in Urbanology magazine, and a number of other prizes. The battle was pretty simple, two producers were picked at random and given 45 seconds each to play their beat for the judges. The winner went on to the next round and the loser went home. The expert panel was made up of grammy-winning producer 9th Wonder (Little Brother, Murs, Jay-Z), Toronto’s own Boi-1da (Kardinal Offishall, Drake, Eminem), & Stalley.

Toronto comedian, Trixx, was the host for the night and did a phenomenal job cracking jokes and naming the theme of the night “Gimme Your Shit!” There was a solid variety of hip-hop beats ranging from that jazzy-soul vibe to dubstep inspired. Gimme Your Shit, however, was inspired by the many Lex Luger sounding joints; which is understandable as his style is popping right now.

From what I gathered at the event a number of cities were represented apart from Toronto including Windsor, Cambridge, Brampton, Kitchener-Waterloo, and Amsterdam, home of the returning-champ Neenah.

Of the 32 producers, there were a few that stood out, 14 year-old Wondagurl, Superville, Duke Dinero, Neenah, Alpine and the eventual 2011 winner, Mr Magicc.

Make sure to check these cats out, maybe you can cop some hot beats on the low before these guys blow up! And be sure to check out the 2012 competition, especially you young artists. This event would be a great way to network with talented, young producers.

The Battle of the Beatmakers weekend continued Sunday with a screening of LRG presents… The Wonder Year, a film by Kenneth Price. This documentary followed 9th Wonder for a year, and focused on the daily life of the Grammy-award winning producer, CEO of IWWMG (It’s a Wonderful World Music Group), Duke University professor, and father.

The film had cameos from Buckshot, J Cole, Drake, Phonte, DJ Green Lantern, DJ Premier, Illmind, Sha Money XL, Murs and more. This documentary is a must see for any hip-hop fan.

Following the film, there was a Q & A with Price and 9th Wonder. The doc was Price’s graduate degree thesis; and it was inspiring to hear how little money was needed to create the film. In Price’s words, “With a thousand dollar camera and gas money, one can create a project like this”.

9th also revealed that, apart from music, he is a passionate historian and is currently writing a screenplay surrounding a certain historical event. Finally the two spoke of hip-hop as a community. 9th explained, when he was growing up, if he had Mobb Deep’s The Infamous and a friend wanted to hear it, he would need to go to his homie’s house. And if there were 3 people there, he would now have a group of friends thanks to hip-hop. It is important for all of us hip-hop lovers to attend events and interact with each other in the real world to ensure the digital age doesn’t break up our community.

With that said, Manifesto is coming up and 9th Wonder will be performing with Little Brother collaborator Phonte on September 25th at Yonge & Dundas square. I look forward to seeing all of you there.