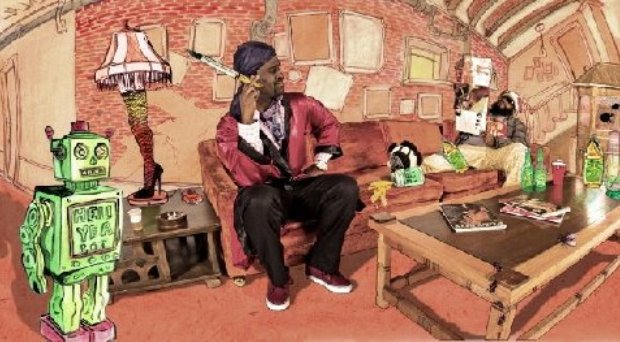 New shit from De La, yes please. Sounds like a concept album from Dave and Pos due in a couple months.

“Due to hit the streets in April 2012, the ‘First Serve’ album, made with acclaimed French production team 2 & 4 (aka Chokolate & Khalid), tells the story of two dreamers in a basement struggling to start their musical career, the battles they face, through to the point that they eventually release their debut single, ‘make it big’ and their hard work and persistence finally pays off. As we know that is rarely where the story ends and the story of ‘First Serve’ is no different. Taking place in an animated world that could have been imagined by Hawley Pratt on Magic Mushrooms, the high spirited and often hilarious journey is pure old school hip-hop; skits, disco, beats, funk, quips, burns and hustlin’ all included.”

In the unusually warm 3am air of a Parisian suburb, a house party is getting out of control. Police Nationale have been called – but no-one can get near. The air is thick with Hip-Hop filling the adjacent streets, acting like a force field. You can hear the faint licks of Aerosmith and the rising vocals of Bowie as far as the Champs Elysees. Is that DJ Kool Herc on the decks? Situated in the Capital of French Electro, the influence is audible, while Meth, Red, Jay-Z and even Mystikal get 16 bars in on the mic. Who knew The Beatles were this funky?
The cause for celebration? It’s the wrap up party for First Serve, an undercoverproject that has been two years in the making. First Serve is the brainchild of 2 & 4 (aka Chokolate & Khalid, producers/ DJ’s). After an instant meeting of minds they decided to embark on a musical adventure – a Hip Hop album played by musicians. All they needed was a couple of MC’s to help complete their vision. Enter NY based Jacob ‘Pop’ Life and Deen ‘D’ Whitter.Listen to the mixtape recorded at the party. It’s funky, it’s hip hop, it’s disco… and it’s a classic!