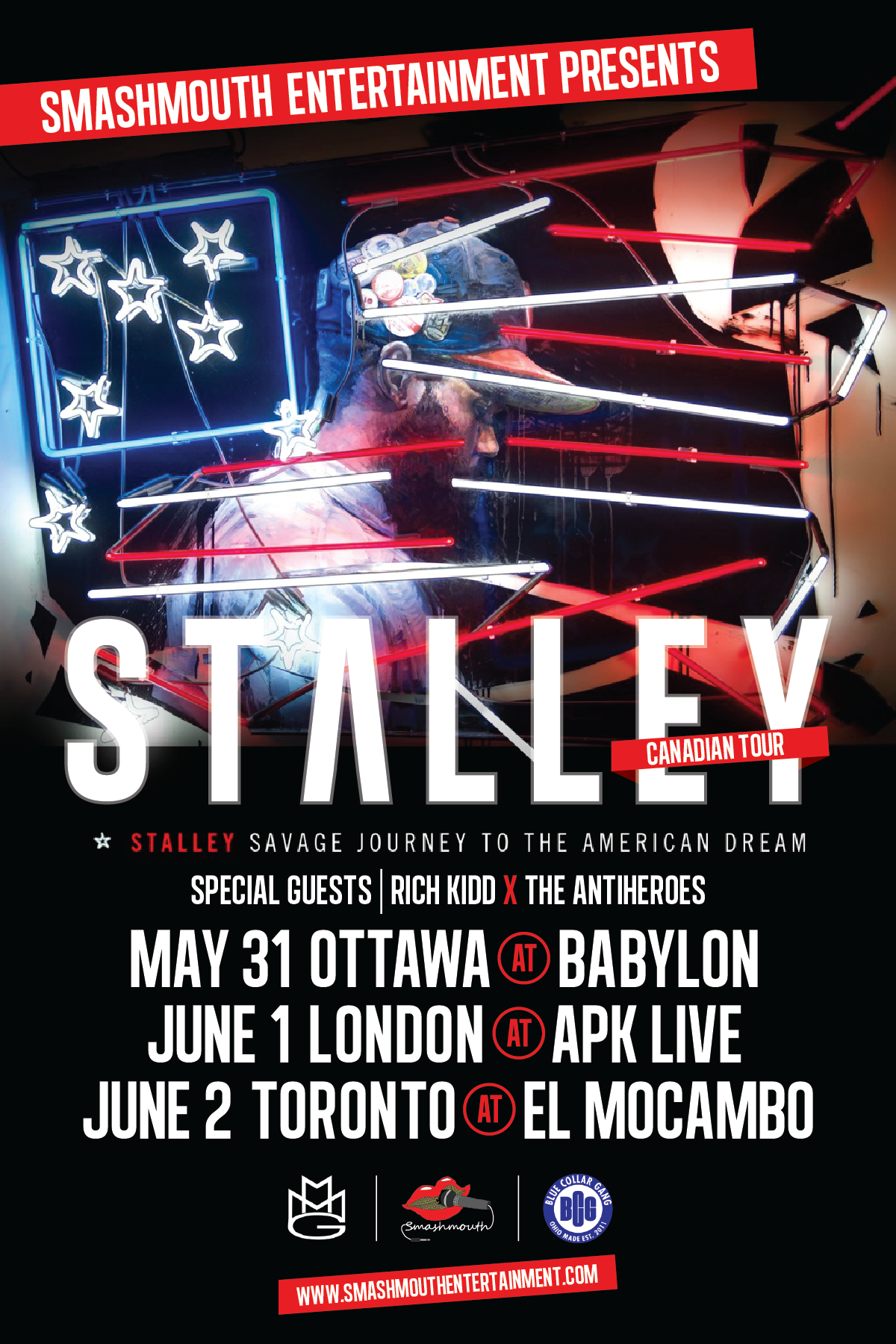 It’s an event we have been planning for a few months now. The Come Up Show is proud to present the show you definitely want to attend! Maybach Music Group signee Stalley, Juno nominated producer and artist Rich Kidd, The Antiheroes and Ngajuana June 1 at Apk Live. I truly hope everyone understands the magnitude of talent we have put together for this show.

What: The Come Up Show and N.E.C. Presents Stalley, Rich Kidd, The Antiheroes, Nga Live in Concert.

Stalley’s career first took off when his and Ohio DJ Terry Urban’s mixtape ‘Goin’ Ape’ caught the interest of Mos Def; which led to the Ohio emcee opening for Mos on one of his tours. Along with Ross, Stalley’s list of known hip-hop associates is nothing short of impressive; with names like Ski Beatz, Jay Electronica, Wale, Curren$y, and even folk rocker John Mayer.

Rich Kidd is a juno nominated producer, who has produced for artists like Nelly Furtado, K-OS, Drake, Shad, and many more. Rich Kidd emerged in 2009 as a commercially viable producer when the legendary Busta Rhymes used his production for a mixtape cut featuring M.O.P.’s Billy Daze called “Indescribable.” That same year, Juno nominated Kos wrote one of his career’s biggest hits over a Rich Kidd production sampling Phantom Planet’s “California.” “I Wish I Knew Natalie Portman” featured Saukrates and Nelly Furtado and the video was nominated for a Best Hip Hop Video at the 2010 MMVAs. He has shared the stage with J. Cole, Jay Electronica, KRS One, Big Krit, Cory Gunz and Kendrick Lamar, and the Toronto Star named him one of Toronto’s top 5 independent MCs.

The Antiheroes consist of Sha and Flex—two emerging emcees from Durham Region with the lyrical finesse and throw-back vibe that remind you why you started listening to hip hop. The duo’s unique blend of vintage beats, catchy samples and effortless wordplay has fans buzzing, subscribing and following worldwide. From their upcoming debut This is FreeDUMB, singles “Fly” and “Circus Clowns” have been featured across industry sites and campus radio—from Germany to Australia—to an overwhelmingly positive response. At once classic and fresh, The Antiheroes are in it for one thing: the music.

One of the most diverse and complete artists to ever hail from Canada, N.G.A (Ngajuana to his true fans) has shown absolute dedication to his craft. Over a span of 9 years, N.G.A has written 450 tracks and counting. N.G.A has performed more than a hundred live shows and has translated his considerable skills into opening for a good number of prominent hip-hop acts. Ngajuana is in the final stages of preparing to release his third, full-length album: Section One. Section One is entirely produced by the geniuses in the U.K.-based production team: PnT WorldWyde.