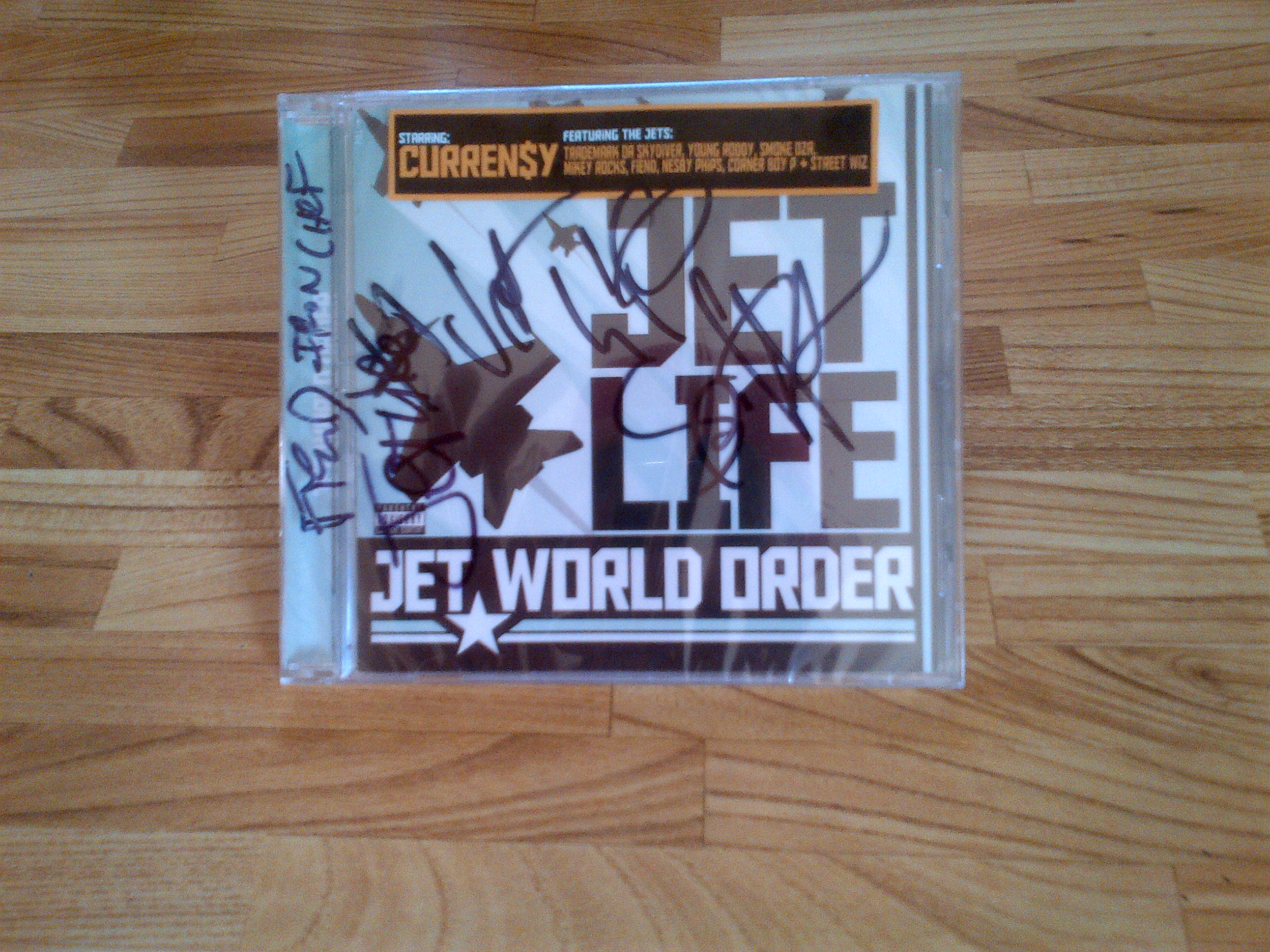 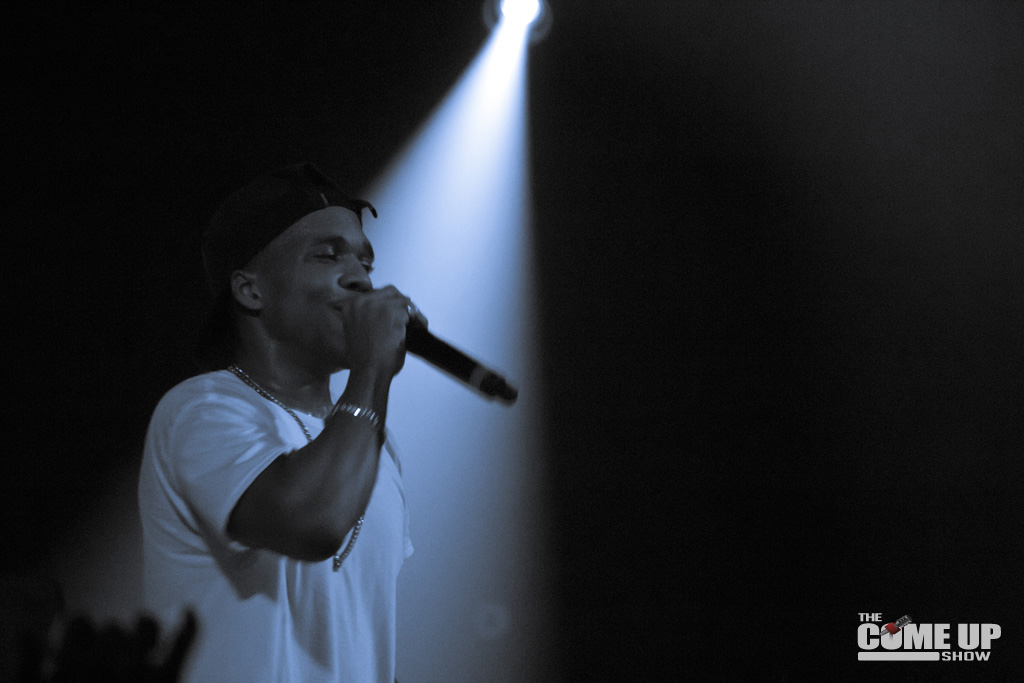 On Friday May 25th it really was JETS over everything as Curren$y aka Spitta brought his 2012 Jet Life Tour to the Opera House in Toronto, alongside his J.L.R. (Jet Life Recordings) associates Corner Boy P, Fiend 4 Da Money and Young Roddy. Since missing out on the Smokers Club tour last year, this was my chance to redeem myself. Entering the concert was an interesting experience as lighters and other paraphernalia were taken by security due to the fact it would be a “Non-Smoking” event; like that was really going to happen. Walking into the venue, the large number of people that were already inside didn’t come as a shock, especially with the artists who were set to perform for the evening.

With a much anticipated crowd waiting eagerly throughout the evening, the DJ (DJ E.F. Cuttin) walked on stage at around 10:30pm; adding much relief to the audience who had been listening to the LiveLoveA$AP” mixtape since the doors opened. The DJ made it evident that border patrol had given them quite an amount of trouble upon entering into Canada. Nonetheless they had arrived all the way from New Orleans, Louisiana and were here to put on a show. After about an hour long set by the DJ, the lights started to dim down and with smoke pouring from the stage out emerged Corner Boy P. Sporting a hoodie he got right to work jumping into some of his popular tracks including my personal favorites “Lane Switching” and “Counting’ Money”. After showcasing a handful of songs, Corner Boy P was eventually joined by Fiend as they performed their collaborative track “Why We Do” produced by Cookin’ Soul. 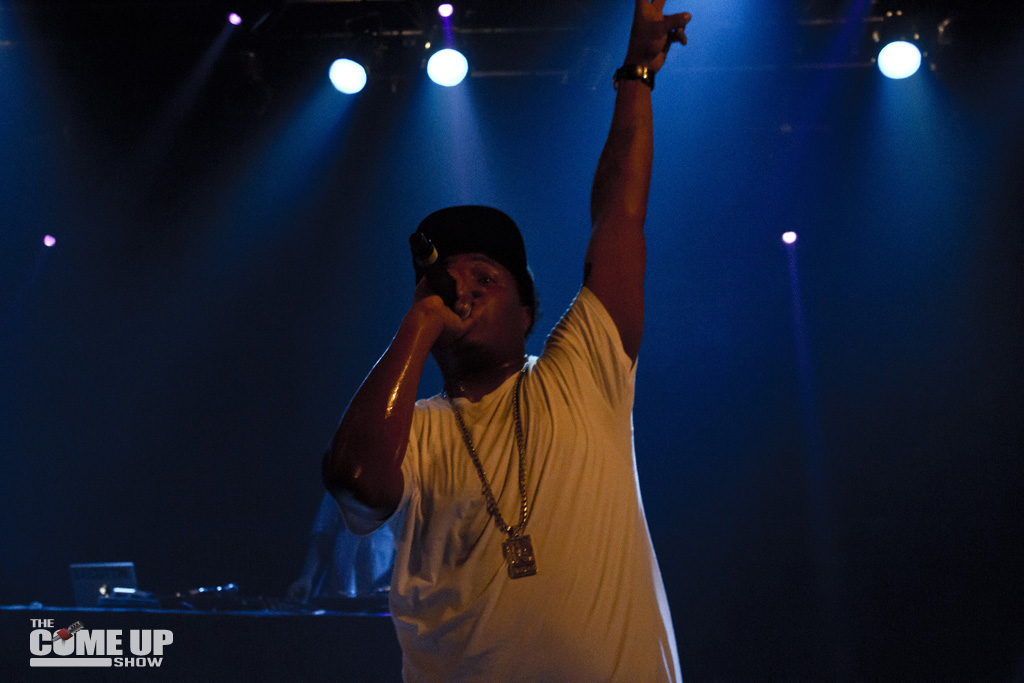 After that, Corner boy P had slipped behind stage giving Fiend the spotlight. Blessing the crowd he kept the show rolling with more songs off of his newest project “Iron Chef”. Through his laid-back approach and smooth delivery Fiend moved into a song called Champagne which features Curren$y. With Fiend jumping off stage he continued to interact with the audience as small circles of fans surrounded him, loud chants of “Jet Life” spilled from the Opera House countless times. The atmosphere quickly changed as many, including myself were anticipating Curren$y to come out next. 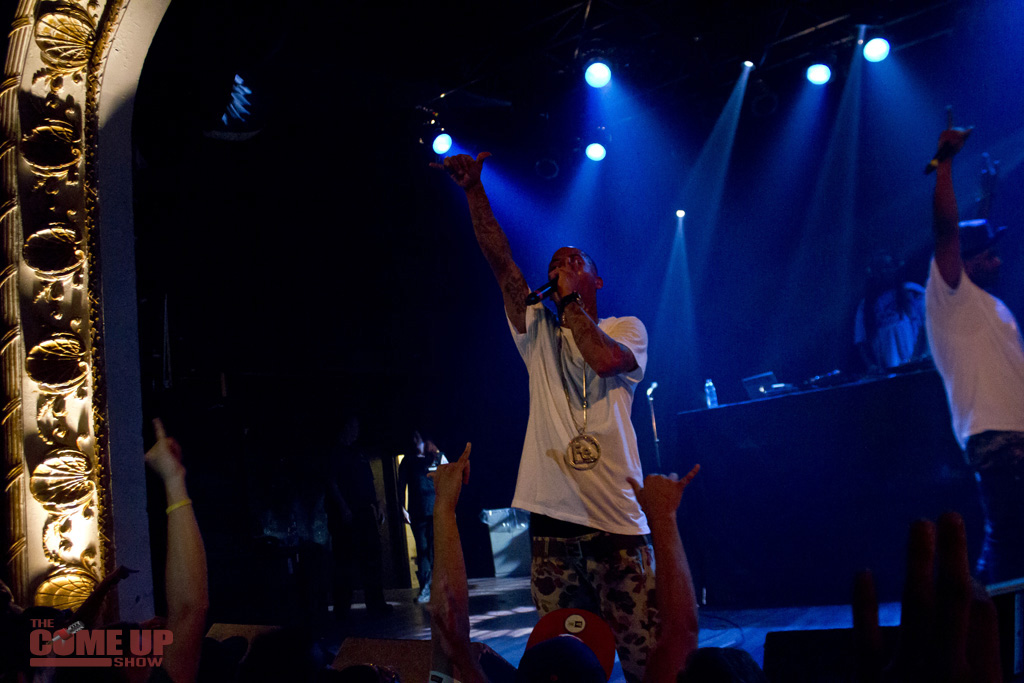 With Jet Life chants continuing, Spitta hit the stage with more than enough energy and a stage presence he is so well known for. This was the moment where pinky’s and thumbs extended from every person in the crowd, as it was obvious the JETS were officially in the building. Before leaving the stage, Fiend joined Curren$y for their “Blood sweat and gears” song. With a more than impressive catalogue of music it was interesting to see what songs would be featured that evening from Curren$y. As the main attraction and pilot of the JETS, he wasted no time as he started the night off by performing an acapella version of Twistin’ Stank in which the audience joined him, singing word for word. Talking to the crowd he expressed his love for his in Toronto and how much he enjoys the city. “Full metal” followed next, a hard-hitting song off of the “Covert Coup” album produced entirely by the Alchemist.

Stating to the fans that while at the border they took a couple of his homies from him because of their backgrounds, it started to seem that a certain member was unable to make it. However, joining Spitta after a few songs was Young Roddy who many believe to be on the come up, especially after dropping his debut mixtape “Good Sense”. The two performed the song “Roasted” while fans were happy to see Roddy on stage. Repeatedly joking around Spitta told the audience that some of his material might be “too new” for us but surely that was not the case at all. Throughout his set a number of songs were performed which covered many of his projects ranging from Pilot Talk, Pilot Talk II and Verde Terrace. Standout tracks during the night included “BBS”, “High tunes”, “Ways to kill em” “Famous” and “Michael Knight”. 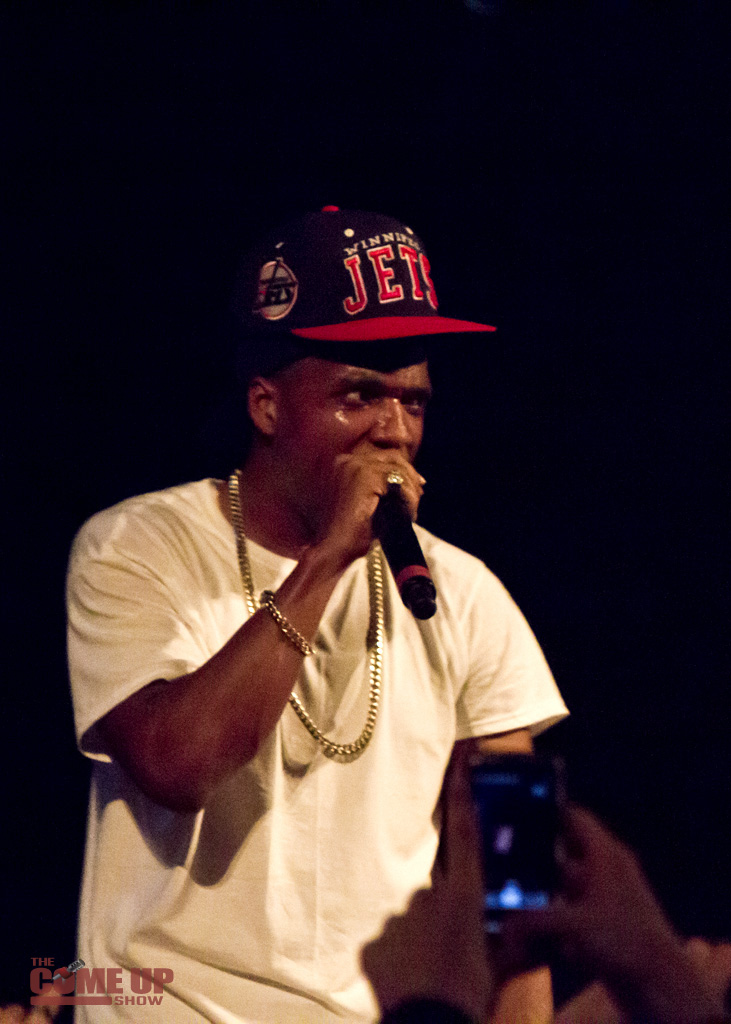 With so much liveliness from both the fans and the artists during the entire concert, it was unfortunate to see everything come to an end. Witnessing the performers leaving backstage, the audience slowly started to fade away. It was obvious they were more than satisfied; overhearing individuals as they discussed how great the show really was. 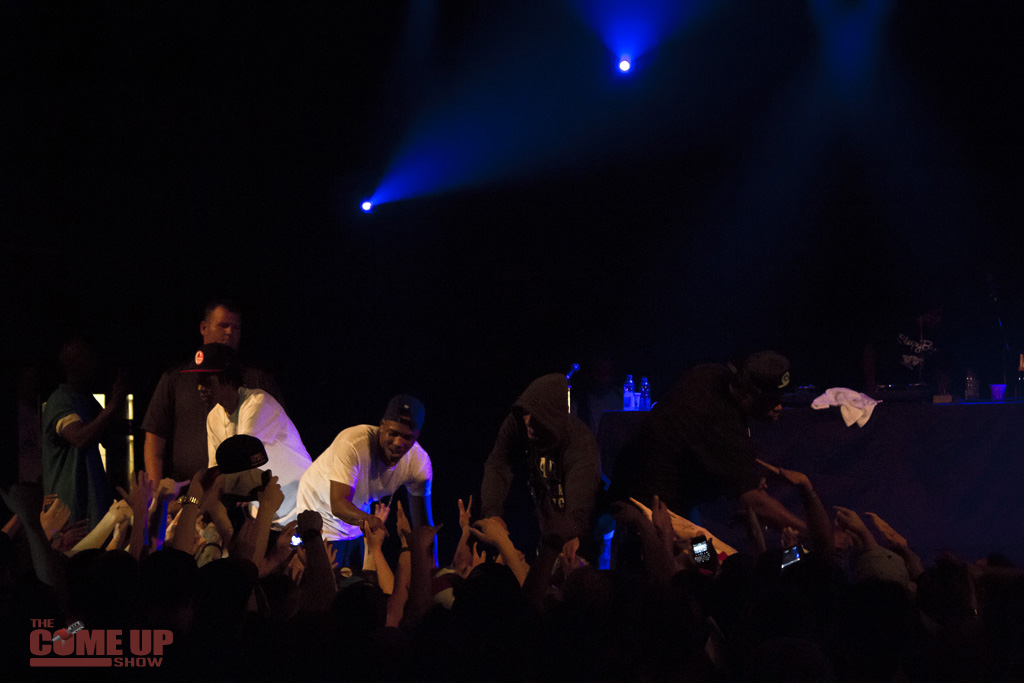 When out of nowhere, to my amazement Curren$y came back out on stage to sign autographs. Once people had realized what was happening, they immediately flooded the floor once again in hopes of getting something signed. Hats, shoes and shirts were just a few examples of what fans were holding towards the rapper. Quickly rushing down towards the commotion with my Jet World Order album in hand, anticipation was high of potentially getting it signed. Reaching tall, Spitta grabbed my CD and signed it. That was the pinnacle of the concert for me, having one of my favorite artists sign the album was truly a great feeling. Exiting the building, I came across Fiend who was more than willing sign the album as well. 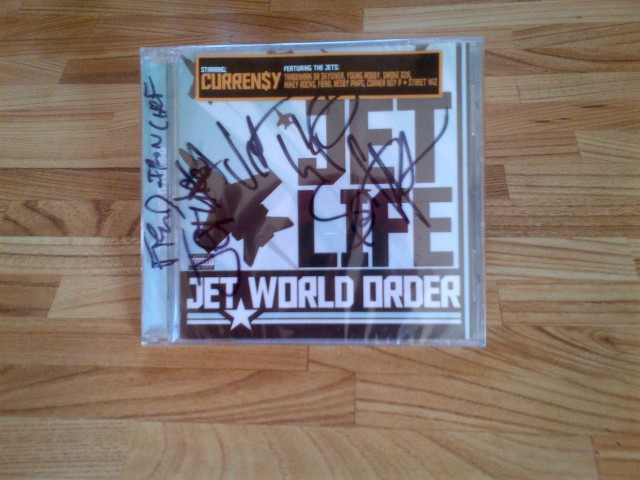 Recognized as some of the hardest working and down to earth individuals in the game, this group will continue to share great music while fans chant “JET LIFE” along the way. This was an amazing show to be a part of and I highly recommend seeing the JETS in person if they ever happen to “roll” through your city. Be sure to look out for Curren$y’s new album, The Stoned Immaculate, set to release on June 5th.