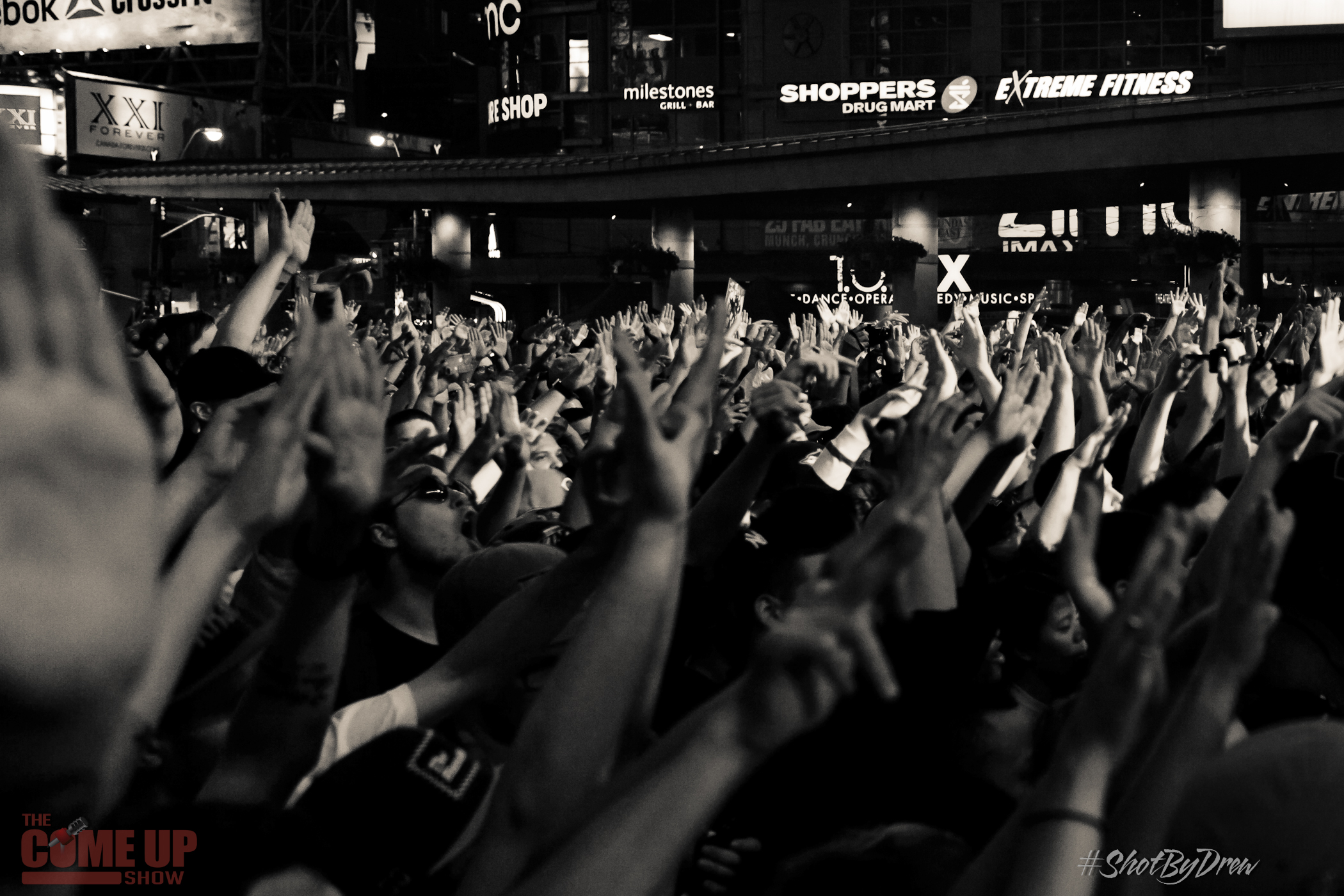 On Sunday June 17th 2012, Toronto’s Yonge and Dundas Square was more than busy for the NXNE music festival. With a week packed of everything music related, true hip hop fans came out that Sunday evening to witness the acts of Action Bronson, Killer Mike, Raekwon and Ghostface Killah. It seemed that the weather wasn’t going to hold up that night but it certainly did cooperate for everyone. Since it was the last show of the week, the majority of people including myself knew that the festival was going out with a bang. It was hard to believe that with a lineup of artists this talented and legendary that this was a free show. 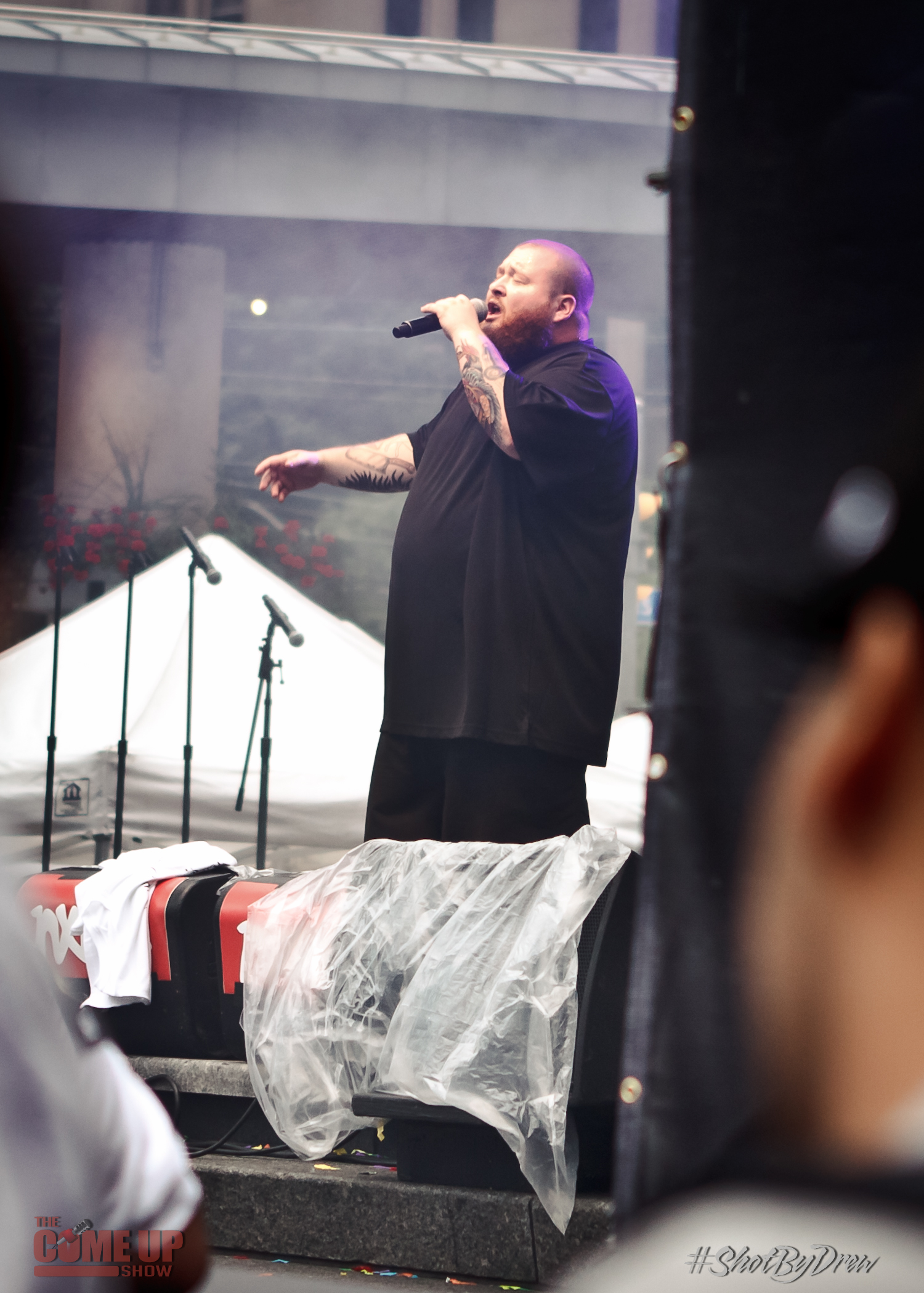 Red cup in hand, Action Bronson came on stage at around 7pm. At this time the venue was quickly starting to fill fast as fans from all ages quickly flooded the stage to see the acts for the festivals last show of the week. With a laid back flow that has been compared to the likes of Ghostface Killah, the Albanian-American rapper got right to work performing songs off his popular “Dr Lecter” album such as; “Brunch”, “Shiraz” and “Larry Csonka”. Other tracks included; “Bird on wire” which features Riff Raff and an unreleased track with the Alchemist off the upcoming project Rare Chandeliers. Being that it was my first time seeing Action Bronson in action (no pun intended) it can be said that he did a great job warming up the crowd for what was next to follow. 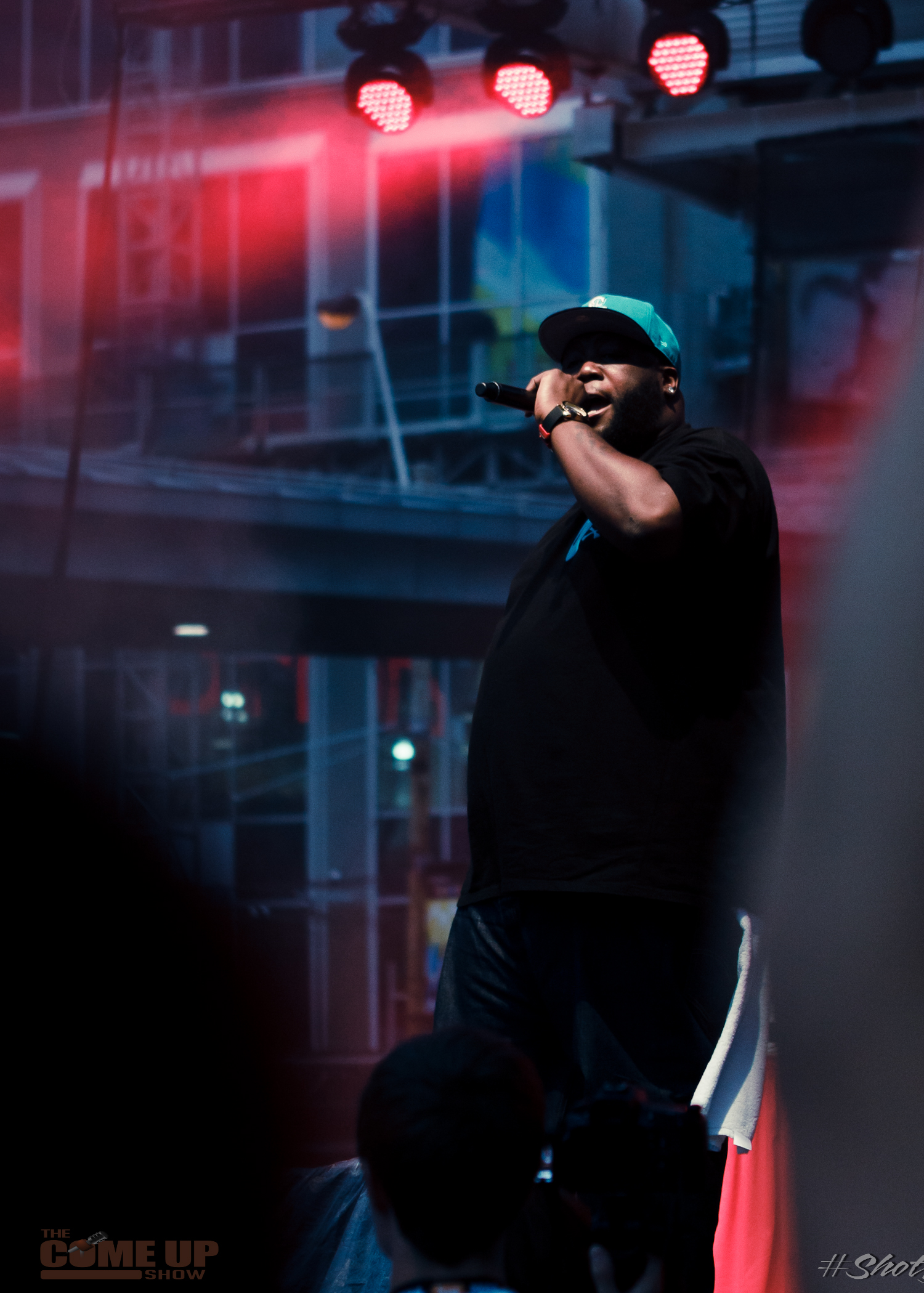 Up next was Killer Mike who brought the energy the crowd appreciated. Interacting with the audience throughout the evening, the Atlanta based MC made it evident that we were going to jam this mother******. Jumping into fast paced songs like: “That’s Life”, “Big Beast”, and “Untitled” it was obvious that everybody was enjoying themselves more and more as the night moved along. Waving their hands back and forth, Killer Mike performed the Grammy winning song “The Whole World” which really heated up things when he moved into the song “Neva Scared” which was the standout track of the night. Stepping aside from the music for a couple minutes, the artist talked about politics and the late President Ronald Reagan stating “If you don’t take care of the people they will burn this mother****** down!” Telling the sound technician to turn up the volume; “Kryptonite” was the next song performed and was personally my favorite track of his incredible half an hour set. After joking around with an officer about Marijuana, Killer Mike finished off his set by giving us a few acapella rhymes, which showed the audience his sense of humor and personality, as he is a legend himself. 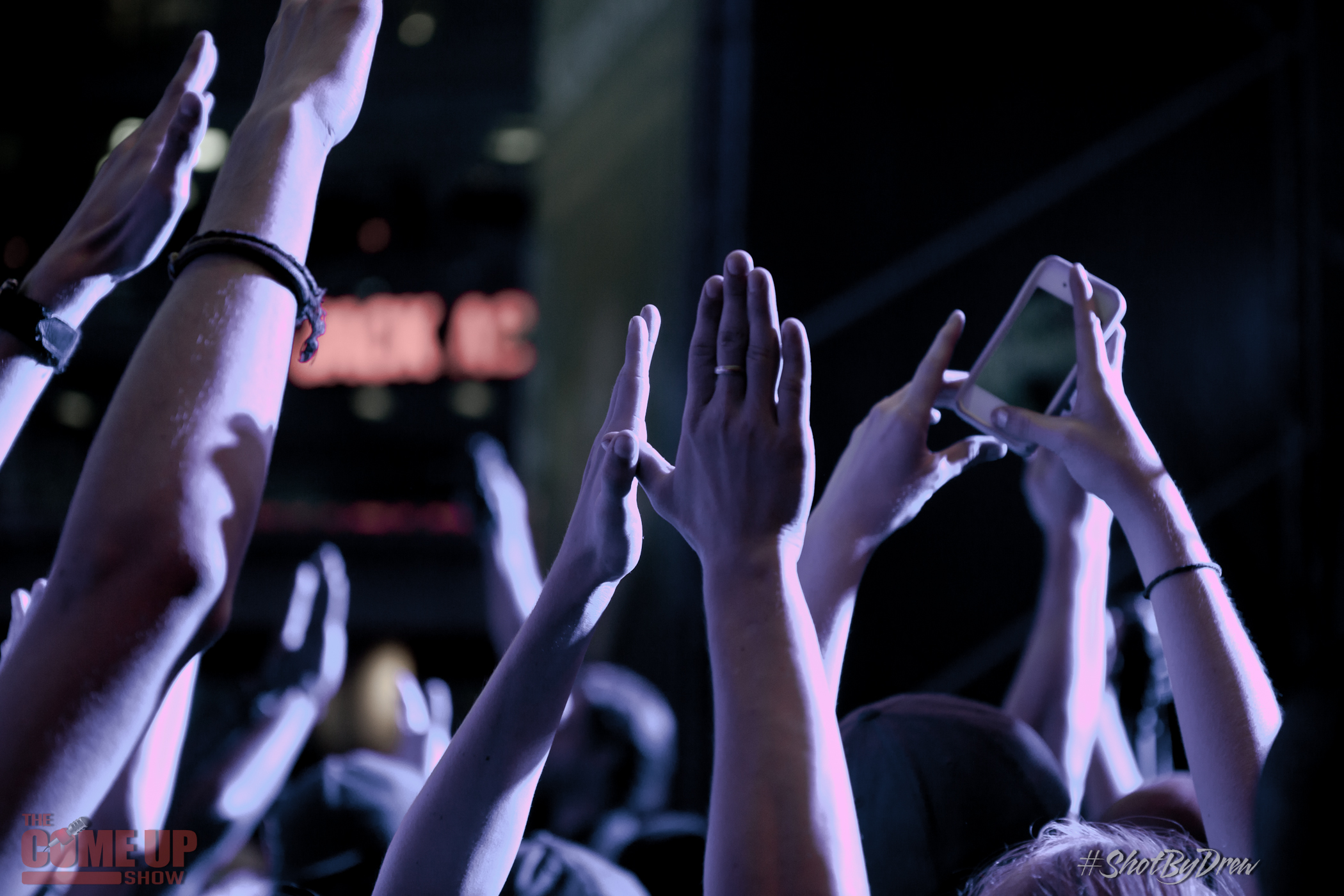 It was now 8:30pm and the MC for the evening made his way to the stage. Holding up and displaying classic Wu-Tang records he asked the audience to make some noise if these records had changed their life. To no surprise, people screamed as they anticipated the legends Raekwon and Ghostface to come out. As the night sky darkened, I glanced around only to notice a crowd filling Dundas Square entirely. It was to the point that fans were stretching all the way across to the Eaton Centre as chants of “Wu-Tang” began echoing through downtown Toronto. It wasn’t too long after that The Chef and Ghost entered the stage. With Skratch Bastid on the turntables the two walked out to their song “Incarcerated Scarfaces” which in my eyes, was a more than appropriate way of starting things off. As Raekwon rocked an ICEH2O t-shirt (which is the rappers Canadian label located in downtown Toronto) and baggy jeans he was accompanied by Ghostface who was wearing a blue baseball cap with a white t-shirt and a white towel around his neck (probably to protect it). Without hesitation the crowd sang along as almost every person watching held up Wu-Tang hand symbols. 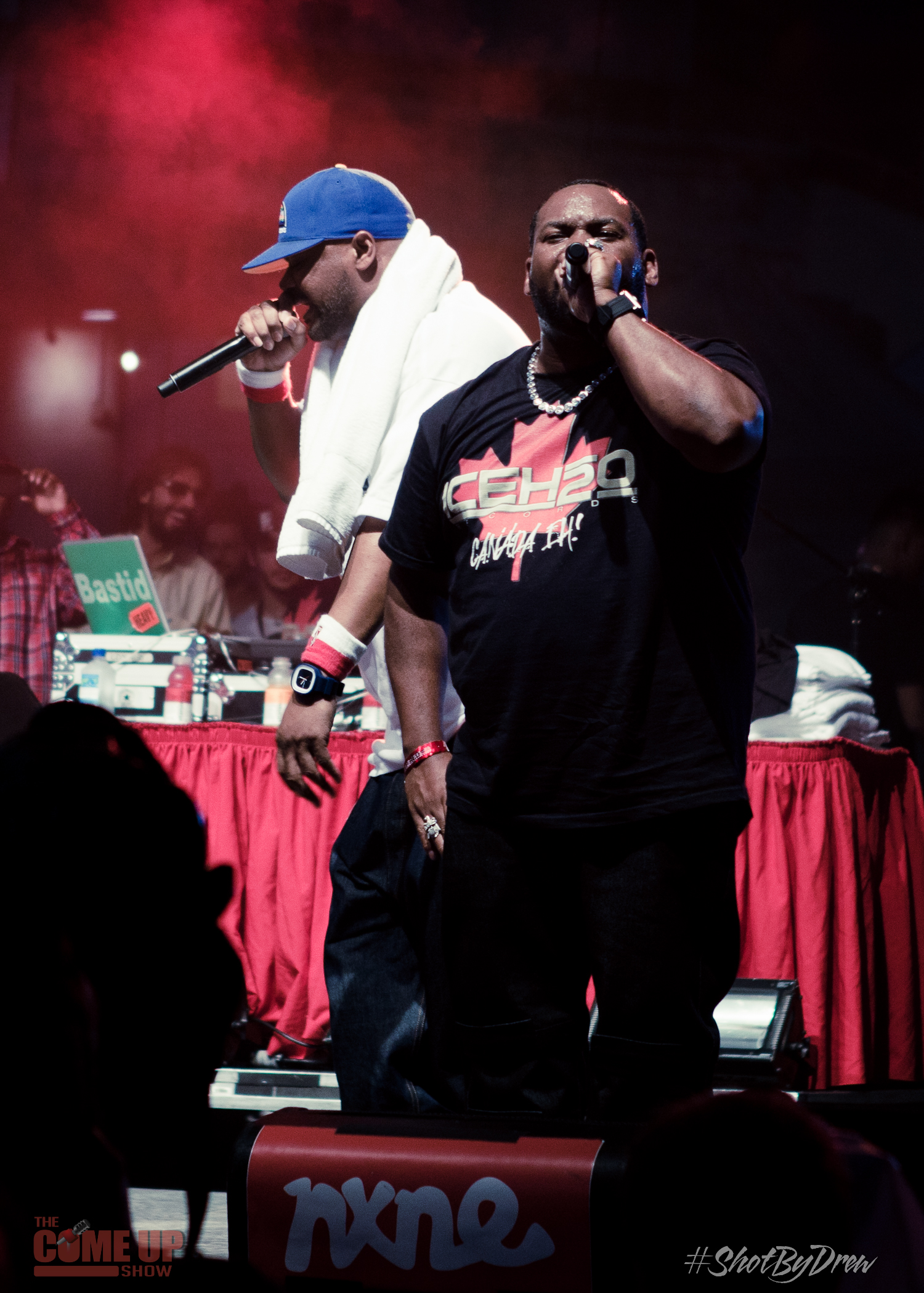 The next song to follow was “Ice Cream” with a group of people dancing around me. Taking us all back to 1995 the duo performed “Ice Water” which came from the album “Only Built 4 Cuban Linx”, also known as “The Purple Tape” to anyone who owned the original copy. The two legends made a point that it was amazing to see everybody coming together for a common cause; telling the audience to “put your hands in the air if you love this shit”. With the venue as full it was, people started to climb storage containers just to get a decent view of the duo. The energy from the crowd really picked up as they performed nothing but an array of classic songs including; “Da Mystery of Chessboxin”, “Protect Ya Neck”, “Surgical Gloves” and “An Eye for an Eye” It had been a while since I last saw Raekwon live and needless to say he brought the same amount of energy as he did when I first saw him. He and Ghostface definitely didn’t disappoint the audience, telling us that their music is “street reality rap”. 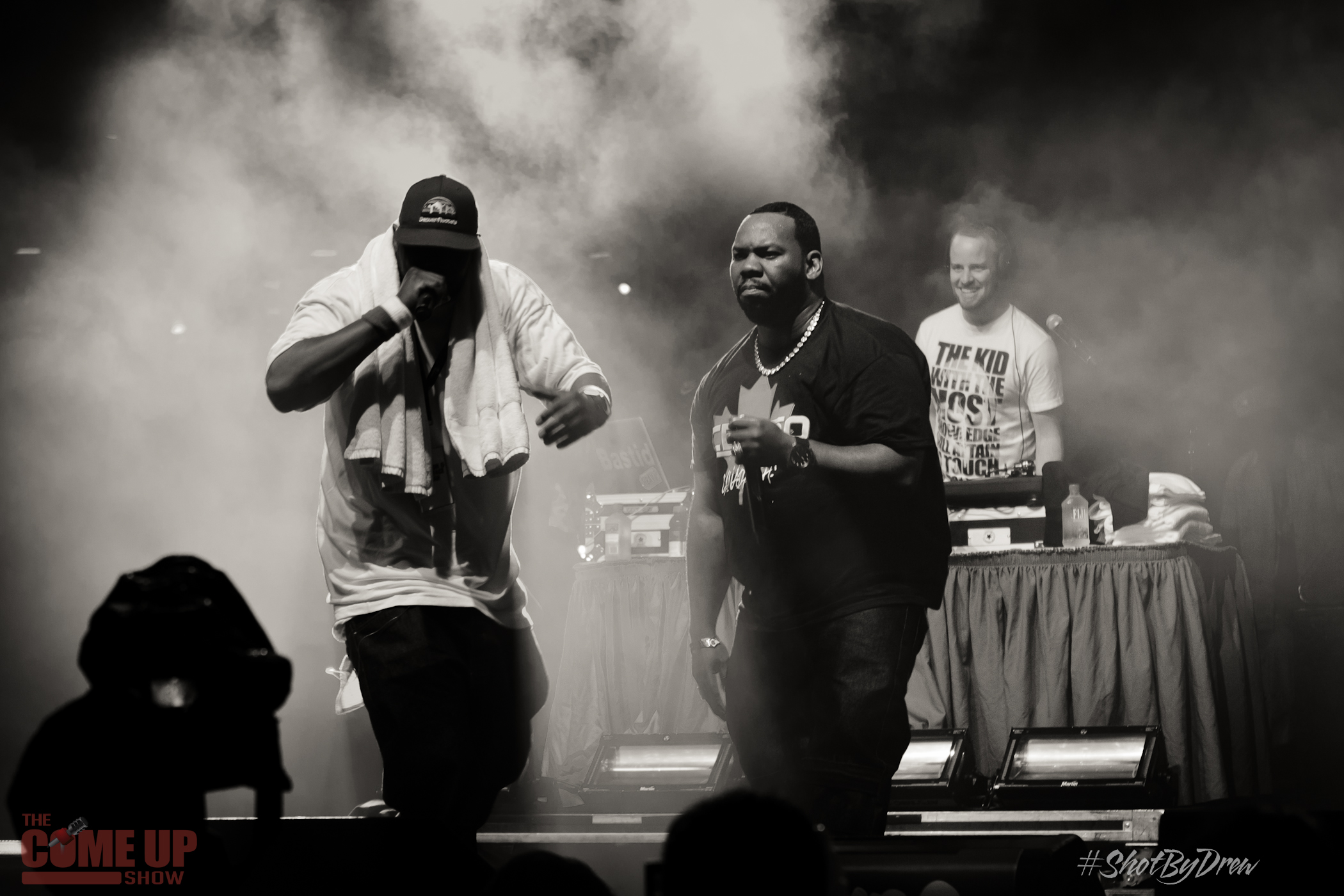 Seeing that it was my first time attending the NXNE festival it can easily be said that all the acts that evening were amazing to see live. The fact that it was a free, outdoor event only added to the excitement. . With the amount of people that attended the show you would have thought the Queen had came to Toronto that night. Instead it was a handful of artists alongside two kings of the rap game. Walking away from the concert I saw a young child dancing in a stroller. That’s when you know it was a memorable event.