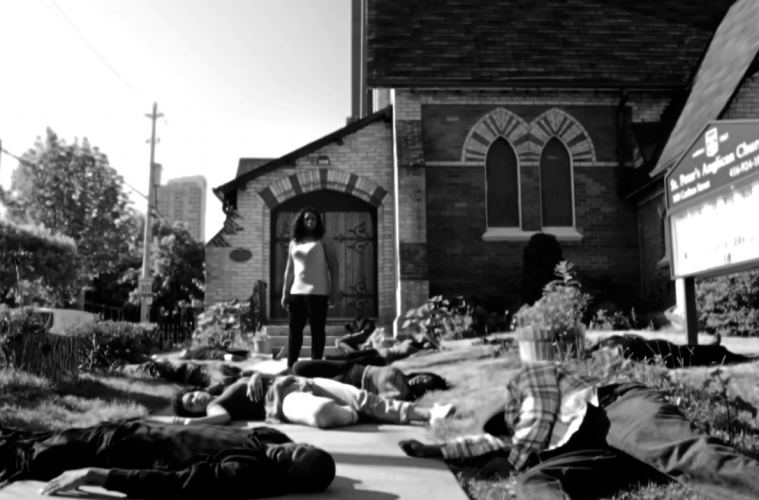 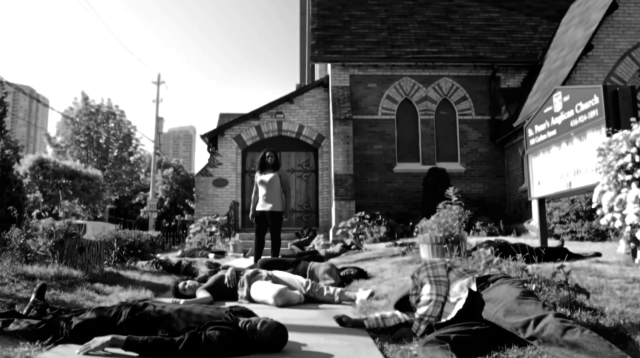 Ian Kamau recently released the visuals to his song “Black Bodies”, off his album One Day Soon. In his typical poetic fashion, Kamau paints a vivid picture of the aftermath of gun violence in “Black Bodies”, a message that rings true in what has been a particularly violent summer in the Greater Toronto Area. Read what Ian Kamau has to say and check out the video below.

As I write this I am sitting in a cafe in Junction in Nairobi, Kenya; one of the places that made me decide to record the album One Day Soon. I came here after spending two months travelling through South Africa (Capetown, Port Elizabeth, East London, Grahamstown, Durban, Pretoria, Johannesburg) and am now on the verge trying to confirm a trip/show in Addis Ababa, Ethiopia.

I have been away from Toronto, for almost twelve weeks in a particularly violent summer for the city. Anyone who has worked with young people in the areas affectionately branded (yes I mean branded) as ‘priority neighbourhoods’ by government and large non-profit agencies knows that this type of violence is not unprecedented, unfortunately in many parts of Toronto it is quite regular.

What is different about this violence, as in the case of Jane Creba on boxing day a few years ago, is that these shootings have been ‘random,’ they have put people in danger who don’t usually feel that they are vulnerable to this type of violence and that freaks them/us out. What incidents like this should reveal is how privileged many of us are to live in relative safety. Many people around Toronto and many people around the globe do not enjoy this type of privilege. For some reason we are more afraid of ‘random’ violence because it might take the lives of ‘innocent’ people. The idea of ‘innocence’ is however a value judgement on human life. ‘Innocent’ people are more valuable than ‘the guilty’ by societies standards. Unfortunately ‘guilt’ is often perceived. I’ll explain. When I walk into banks, corner stores and certain neighbourhoods I personally can be perceived as potentially guilty or at least worthy of fear despite my good intention, it comes along with the territory of being a black male in North America (and almost anywhere else in the world quite frankly).

Many young people in Toronto, often but not exclusively black , often but not exclusively male have lost their lives in Rexdale, Jane & Finch, Esplanade, Jungle, P.O., Regent Park, Blake Street, Malvern etc. etc. etc. for a long time and there hasn’t been this kind of outrage as the Jane Creba shooting or the Eaton Centre shooting that happened a few weeks back. All loss of life is tragic because all life is valuable. We show our entitlement when we think our safety is worth more than the many people who live with this kind of violence every day as a result of their economic standing, physical environment or social standing. If you are more upset by Jane Creba than Chantel Dunn for instance, you might be practicing this form or prejudice, as a matter of fact, if you live in Toronto and you know the name Jane Creba and not the name Chantel Dunn you might be subject to our medias prejudice. Why are we more outraged when this happens close to us? Why are we more outraged when the victim looks like us? What is the value of a human life?

It is spectacularly short-sighted to think that the answer to this type of violence is throwing money at the issue, more police, tougher jail sentences or kicking people out of the city (a suggestion from our amazingly short sighted Toronto mayor). If I continued to have faith in the non-profit sector I might say that the answer is more programs or something cliche like that, but unfortunately I don’t believe that the answer as that simple. The answer is somewhere in what our society values and what society does not value (I feel like I could write an entire book on society and value.. so I’ll just leave it at that).

A few years ago I saw a young man get shot in my neighbourhood; heard shots, looked out the back window of my apartment down to the street where I used to ride my bike as a kid and saw this young man on his knees holding his chest and stomach while his friend called the police. Three weeks later this young man passed away in the hospital due to his injuries. His name was Jermaine, he was not the first or the last to die of a gunshot wound in Esplanade, and my neighbourhood is not known as a particularly dangerous one. I did not know this young man and I could choose whether to be involved or not despite our proximity; another privilege.

A few weeks later his mother came to lay flowers and ask the press for support in helping to find his murderer, she came with his girlfriend and his new baby.

This incident was the impetus for the writing of the song Black Bodies. It was different to me to feel the closeness of this violence as opposed to thinking about it academically, and I still didn’t feel the effects personally; I personally didn’t lose anyone I had a relationship with.

Black Bodies references the line in the song “Strange Fruit” by Billie Holiday (later covered by Nina Simone), specifically the line “black bodies swinging in the southern breeze, strange fruit hanging from the Poplar trees.” The bridge of ‘Black Bodies’ specifically makes multiple references to the song ‘Strange Fruit.’ ‘Black Bodies’ is an attempt to re-contextualize the lynching of black people, specifically black men. At one stage people were being lynched by racists simply for being black, now, in addition to the justice system, education system, economic and social systems lynching us (statistically black people are the highest represented in prisons even where they are not the majority, highest represented in terms of drop out rates, are large populations in poverty stricken communities and are often high occupants of what some call the ‘under class) we are also highly represented as victims of violence, gun violence specifically and often from our own community. Unfortunately I now know people who “occupy both sides of the trigger” and it has changed my perspective. Some I supposed would believe that this has only to do with blacks as people, an enormous and prejudice simplification of the problem that denies so many historical, economic and social factors as to be almost laughable, if the reality completely serious (but again, I digress).

Myself and Randall Thorne (RT) started disguising a concept for the visuals for this song over a year ago; we applied for and received a VideoFACT grant (which I wasn’t expecting). The original idea was a short documentary with the mothers of victims of gun violence from different part of Toronto telling their stories form their perspective. We went and met with five families who had lost their sons to violence and listened to their stories, their frustrations, their pain and their joy. For me, despite this idea not panning out, this was the most important part of me creating this song. Unfortunately because of the sensitivity of the subject matter we ended up not being able proceed with the original idea for the video as we had envisioned it and decided to go a more traditional route due to logistics and an over-extended production schedule.

I would however like to thank all the mothers and families that we met with for sharing their stories, opening their doors and more than anything educating us about a side of these stories that I still don’t feel like has been properly explored. Thank you so much for your time, resilience, strength and vulnerability.

Below are the lyrics to the song (I thought for this one it was important). Thanks again to all the families that we spoke to and thank you to RT and Rinku for being so patient and working so hard on this project.

This video is dedicated to all those people who have lost their lives too soon.