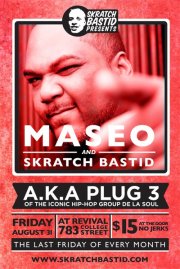 Skratch Bastid Presents, returns for a fourth monthly installment that will feature a DJ set by rapper, producer, DJ, Vincent Mason a.k.a Maseo a.k.a Plug 3 from iconic Hip-Hop group De La Soul. De La took the scene by storm as they helped innovate Hip-Hop by thinking outside of the box, sampling a wide variety of untouched artists. Known for propelling other artists to greatness such as Mos Def (Yasiin Bey) and A Tribe Called Quest, they are recognized as one of the “oldest” Hip-Hop groups functioning to date; collaborating with artists like MF Doom, Ghostface Killah, and Madlib. They have also worked closely with the Gorillaz creating the song “Feel Good Inc” which became the biggest single ever for both. Be sure to make your way to the Revival Bar on August 31, this is an event you won’t want to miss!