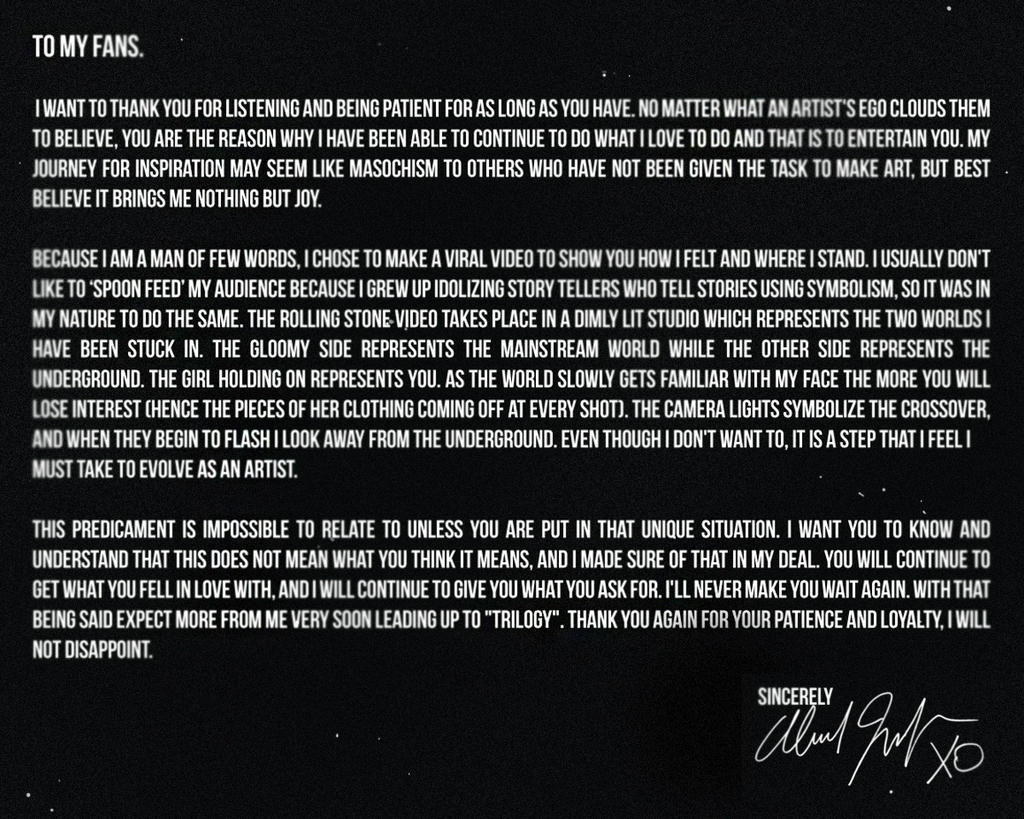 The Weeknd released a video for his song Rolling Stone and shorty after tweeted an open letter, as Weeknd fans know he is a man of few words and considering Rolling Stone is his first video featuring himself, his approach has been working in his favour. The Trilogy which features all his 3 mixtape and a few bonus tracks remastered is set to release November 13 via Universal Records. Make sure to check out our photography and video when The Weeknd performed at the Homecoming Tent party last year.

I want to thank you for listening and being patient for as long as you have. No matter what an artist’s ego clouds them to believe, you are the reason why I have been able to continue to do what I love to do and that is to entertain you. My journey for inspiration may seem like masochism to others who have not been given the task to make art, but best believe it brings me nothing but joy.

Because I am a man of few words, I chose to make a viral video to show you how I felt and where I stand. I usually don’t like to ‘spoon feed’ my audience because I grew up idolizing story tellers who tell stories using symbolism, so it was in my nature to do the same. The Rolling Stone video takes place in a dimly lit studio which represents the two worlds I have been stuck in. The gloomy side represents the mainstream world while the other side represents the underground. The girl holding on represents you. As the world slowly gets familiar with my face the more you will lose interest (hence the pieces of her clothing coming off at every shot). The camera lights symbolize the crossover, and when they begin to flash I look away from the underground. Even though I don’t want to, it is a step that I feel I must take to evolve as an artist.

This predicament is impossible to relate to unless you are put in that unique situation. I want you to know and understand that this does not mean what you think it means, and I made sure of that in my deal. You will continue to get what you fell in love with, and I will continue to give you what you ask for. I’ll never make you wait again. With that being said expect more from me very soon leading up to “TRILOGY”. Thank you again for your patience and loyalty, I will not disappoint.