On Thursday July 11th, 2013 the newest HipHop duo Run The Jewels, featuring Killer Mike & EL-P performed at The Hoxton as part of their ‘Run The Jewels’ tour to promote their free album by the same name, alongside Despot & Kool AD. 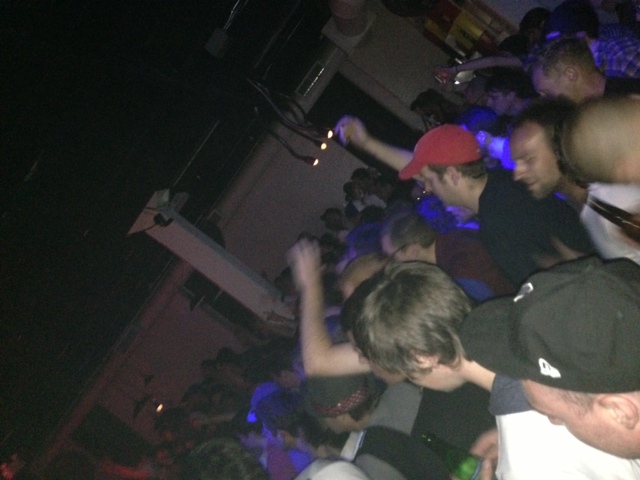 I arrived at the event a little bit before showtime, and it was crazy packed. I had not been to a HipHop show in quite some time, so I guess I had forgotten how dedicated fans are to artists who stay true to the crucial fundamentals of the genre  – the energy was raw. I squeezed my way over to the bar, manoeuvring my way through rap heads bobbing to the former Das Racist MC Kool A.D’s smooth flow. Following him it was Despost, who has been a apart of EL-P’s label Definitive Jux (Def Jux) for quite some time and when he hit the stage he immediately switched up the energy with his set, the crowd loved it. 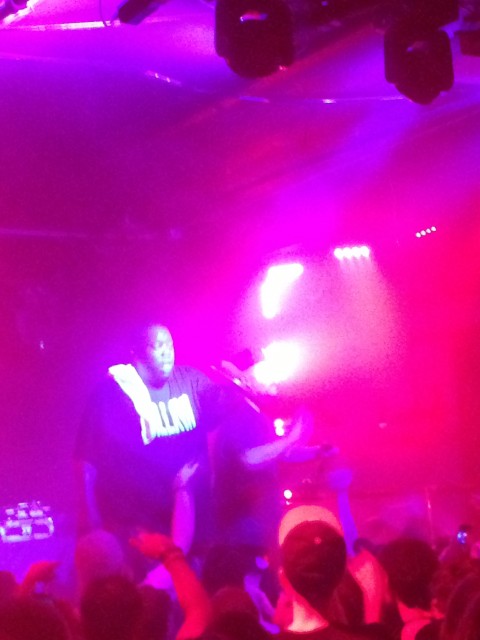 When it was time for Killer Mike to come out on stage and do his set I realized how far away I was from the stage because all my pictures of Kool A.D and Despot were hella blurry. Being short and small definitely has its perks in manoeuvring through a crowd swiftly, but it is certainly not an asset at a hip-hop show where everyone seems to be 10ft tall – I could barley see. It was too late though, Killer Mike had already started his set and I didn’t want waste anymore time moving. Drawing mostly from his album “R.A.P Music” he took over The Hoxton, and almost like a HipHop Preacher he announced that “We are at Rap Church now”, and we were all members of the congregation. He blessed us with tracks like “Thats Life” and “Go”, then he delivered “God Is in the Building” on his knees as a sermon. The crowd was fully engaged and the energy in the building was just rising. 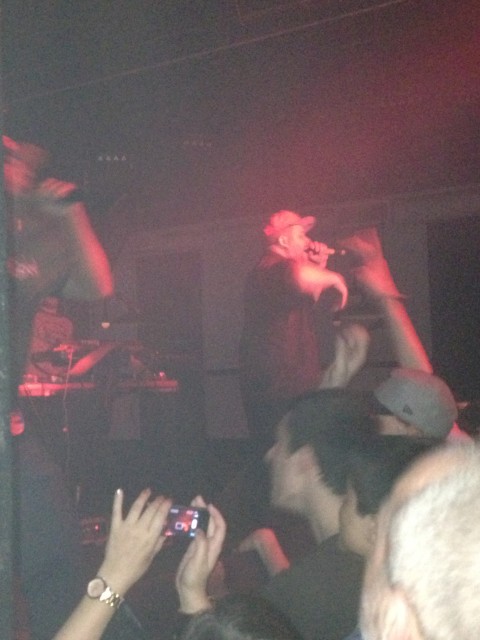 After Killer Mike finished his set, EL-P hit the stage the crowd went wild. He has a remarkable ability to command the stage, and his lyrical genius never leaves a crowd disappointed. He was going IN, and I was determined to get some good shots and feel that energy close up, I took a deep breath and made my way to the stage. I got a lot closer to the stage than where I was when I first arrived but my shortness still hindered my view of the stage significantly. Now, as I was falling victim to my own height I could hear EL-P giving the crowd “Drones Over BKLYN” and “$4 Vic/Nothing But You+Me”, but when he dropped “The Full Retard”, naturally a mosh-pit broke out and I got as involved as my short body would allow me to – It was so intense! 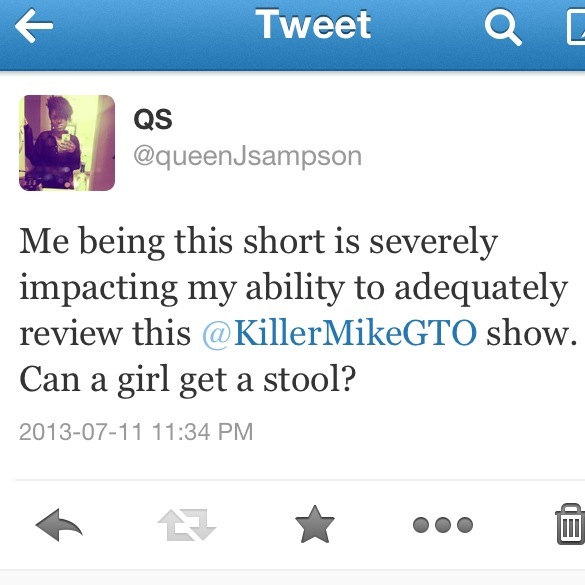 I was overjoyed at the energy at this show, but simultaneously pissed because I was having so much difficulty seeing anything and I didn’t feel I was capturing the show enough to review it correctly (or enjoy it fully) So, I decided to send a tweet to Killer Mike (see above photo) 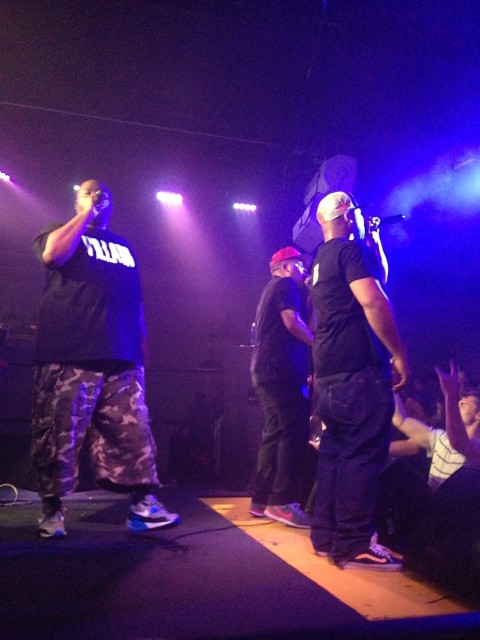 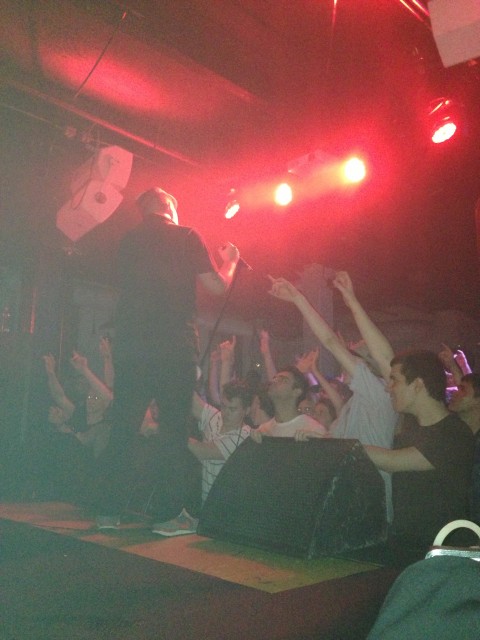 I didn’t think anything would ever come of it really, but almost immediately to my glee Killer Mike responded to me and shortly thereafter emerged from backstage, he didn’t get me a stool but he did get me from the crowd and took me past a very intimidating bouncer to the side of the stage and secured me with a spot, he nodded at me to make sure I was good, I said Thanks and then he joined EL-P back on stage. Not only could I see without going on my tippy toes but I learned that Killer Mike really has a real relationship with his fans, I asked for help and he got me – very impressive.  Oh, of course I was especially overjoyed that I could finally get some dope shots and at the best time because the Run The Jewels set was next and the crowds energy was all the way turnt up. 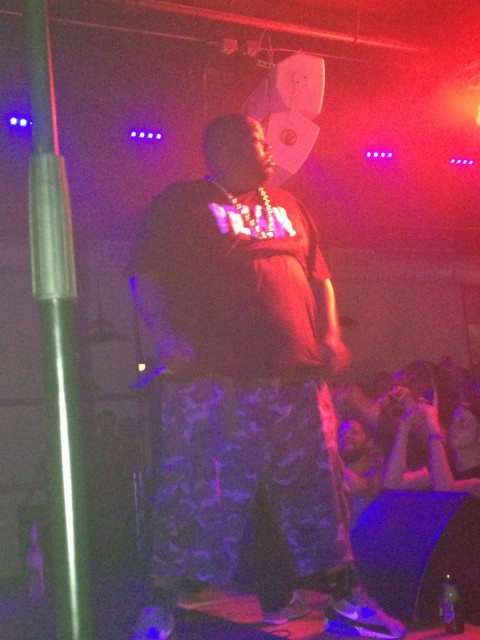 Killer Mike and EL-P both with matching gold chains start going hard through the bangers on the self titled album, engaging the crowd and one another . It felt almost as though we were all sharing the energy of each track and playing ping pong with those waves. I was enchanted by Run The Jewels and I did not want the night to end. Closer to the end of their set they let us know that tonight was the first official show of Run The Jewels which really added to happiness everyone had already been feeling. I know I am not alone in this, but It was one of the best HipHop shows I have ever been to. Run The Jewels is the duo to watch in 2013.