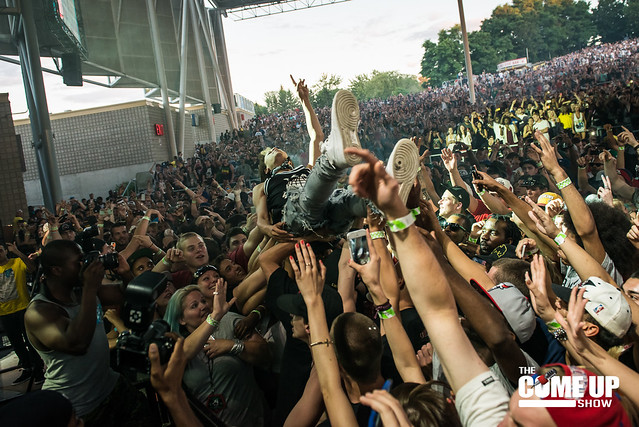 The English dictionary classifies “Influence” as a power affecting a person, thing, or course of events, especially one that operates without any direct or apparent effort. However, being Under the Influence is something totally different within itself and nobody seems to pull this off better than Wiz Khalifa. After announcing his Under the Influence of Music tour earlier this summer, it was evident hip-hop fans would have something to look forward too. I had the opportunity to review last years tour with special guests Mac Miller, Kendrick Lamar, and couldn’t wait to come back this year. With only two scheduled Canadian dates, the tour made it’s way to Toronto’s Molson Amphitheatre on August 10, 2013 for the second last stop.  The second edition of Under The Influence tour promised to be just as exciting, featuring Joey Bada$$, Trinidad James, B.o.B., A$AP Rocky, Pro Era, Smoke DZA, and Taylor Gang’s own Berner and Chevy Woods. Kicking things off, Taylor Gang member Berner took the stage shortly after 5:30pm as the sun shined brightly towards the Amphitheatre. Taking charge of the opening duties, he performed his verse for “Paradise” featuring Wiz Khalifa. Although it was still rather early and most audience members were still unaccounted for, that didn’t stop Berner from putting on a show. A series of tracks followed including “Shut Up” off his recent mixtape, Urban Farmer before being joined on stage by TGOD affiliate Tuki Carter. 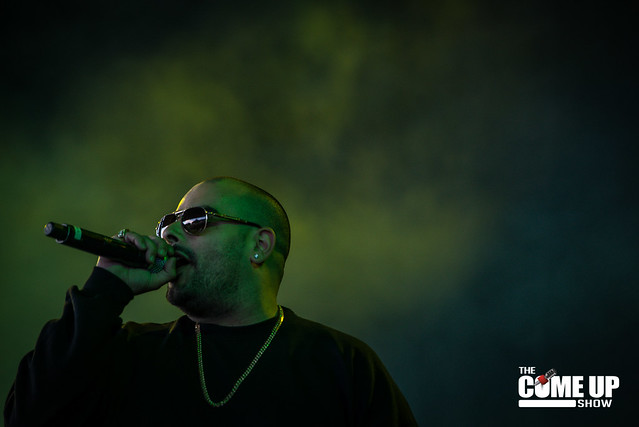 While anxious fans continued to make their way inside the venue, Statik Selektah could be seen operating the turntables before Joey BadA$$ began his set. In typical fashion, the Pro Era member hit the stage in a bucket hat, plaid t-shirt, and khaki’s. Wasting no time, he jumped right into “Waves” off his mixtape, 1999. Following chants of “Brooklyn,” Joey asked onlookers if they were enjoying his recent mixtape, Summer Knights as he went into a song off the tape titled “Sweet Dreams”. Joined on stage by Kirk Knight, the two rappers traded verses performing “Amethyst Rockstar.” “Sit N’ Prey” featuring Dessy Hinds. United with Pro Era, “95 Til Infinity” played next as “Hardknock” as the energy inside the amphitheatre began to pick up. Statik Selektah then shouted “2 Fingers up for Capital Steez, while the Pro Era crew performed “Survival Tactics” to close out a great set. 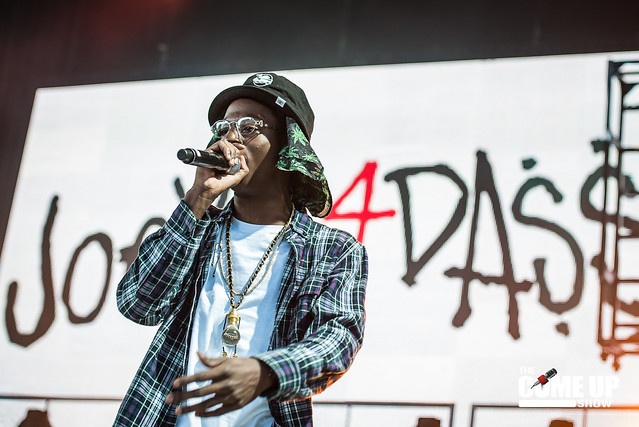 Dream, Believe, Turn Up! Those were the words from Trinidad James as he made his way to center stage. Considering the fact it was TJ’s first visit to Toronto, he stated how thankful he was by saying, “Yo, I’m so happy to be here man, honestly man.” The crowd was more than excited to see James in person as he performed songs from his debut mixtape, Don’t Be S.A.F.E. including “Tonky For The Money”, “Females Welcomed” and “Team Vacation”. Trinidad also delivered his verse on Migos “Jumpin Out Da Gym” (Remix). Despite these songs, it was obvious that crowd goers were waiting for Trinidad’s breakout track titled, “All Gold Everything.” After saying the infamous line “Popped a molly, I’m sweating, woo,” the crowd became thrilled. Following an energetic performance, with sincere gratitude Trinidad James ducked backstage followed by a short break before the next artist came out. 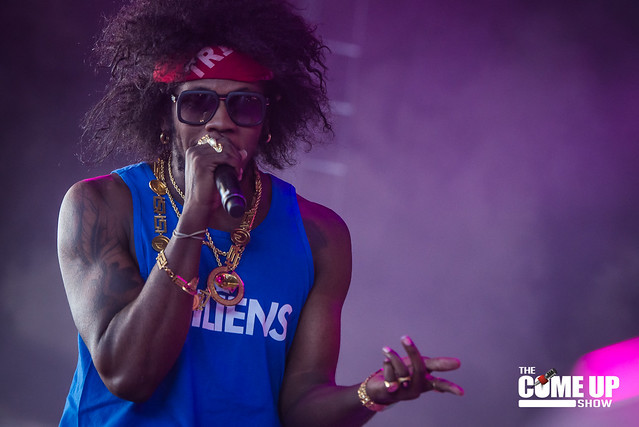 Emerging through thick smoke, dressed in a red hat, white shirt and jeans, Georgia native B.o.B. was the next artist on the bill. Electrifying the crowd, he performed “Nothin On You” and eventually ran into the seats performing “We In This Bitch” for the ultimate experience even taking a fans bag of popcorn and radically throwing it into the air. During his set, B.O.B began throwing free swag into the audience while classic instrumentals of Notorious B.I.G. and Mobb Deep could be heard in the background. Using a fans cell phone, he then began recording his performance as onlookers cheered ecstatically. Surrounded by dancers, B.o.B. then performed “Ray Bands” off his 2012 album, Strange Clouds. If there was any vindication of how the rest of night would turn out, Bobby Ray set the bar very high. His liveliness on stage readied fans for the two biggest acts that were next to follow. 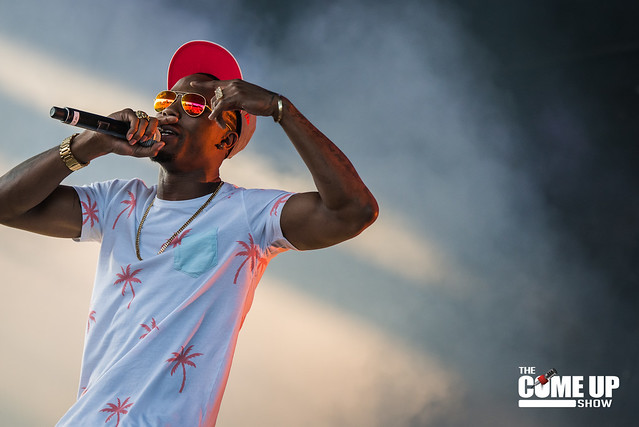 Also headlining the tour alongside Wiz was A$AP Rocky whose name could be seen stylized on the kick drum as the band made their entrance. A$AP started by performing “Long. Live. A$AP” and “Brand New Guy” with aggressive style while the audience erupted with excitement. Joined on stage by the A$AP Mob, the energy inside the Molson Amphitheatre was surreal. As the lights turned purple and a laughing skull was projected behind him, A$AP rocked the crowd with “Peso” before he slowed things down with “Wassup,” off his debut mixtape Live. Love. A$AP., released in 2011. Having performed a week prior at OVO Fest, Rocky took the time to recognize Toronto as the birthplace for one of the best groups and labels, OVO. He reassured fans by stating that his OVO family was one of the first groups he began dealing with when he entered the rap game. Pretty Flacko forewarned us about his performance telling us “I just got one question for y’all, when it’s time to turn the f*** up, y’all gonna be ready for that s***?” I hope so, it’s going to get wild I’m just warning y’all mother******* man, y’all be in store for the craziest turn up all summer baby, I’m just letting you know.” 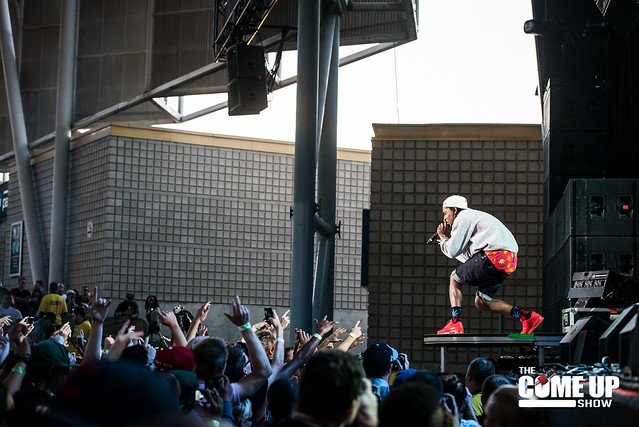 Progressing forward, he then performed tracks off his debut studio album, Long. Live. A$AP including “PMW” ,“Fuckin Problems”, and “Wild For The Night.” By this time, the thirst was real as A$AP Rocky distributed water bottles by throwing them far into the crowd. Backed by A$AP Rocky and the entire crew, A$AP Ferg made his way on stage and got to work; literally. Performing his standout single “Work” to the likes of every individual in attendance, the Molson Amphitheatre was on fire. Concluding his routine, Rocky finished his performance with “Goldie” and his “Shabba.” assisted track. Before leaving, A$AP made it clear that despite race, we’re all equal, and everyone’s heart is purple in the end. 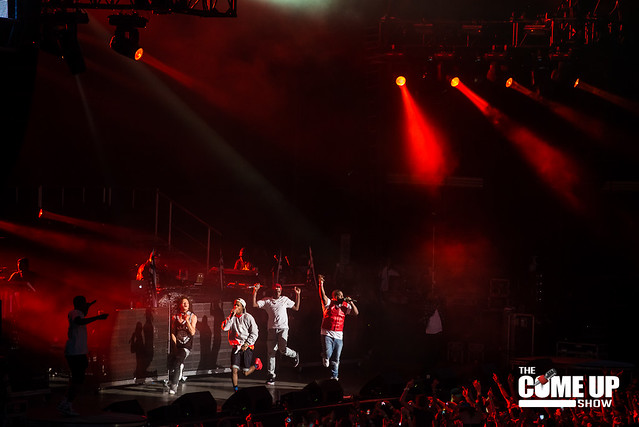 As the night sky engulfed the Molson Canadian Amphitheatre, it was time for a Taylor Gang takeover. Storming the stage wearing a black shirt and ripped blue jeans, Wiz Khalifa intrigued the audience engaging in his 2012 Cabin Fever 2 mixtape single “Bout Me.” Sharing the stage with a live band and supporting vocalist, Khalifa continued with “The Thrill” hailing from his 2009 mixtape, Burn After Rolling as thousands screamed in disbelief. Digging into his catalogue of songs, Wiz performed a slew of familiar tracks including Work Hard, Play Hard,” “Gang Bang” and a newer track titled “Old Chanel” which saw an appearance from the Kushed God himself, assisting with his verse. As the stage lights darkened, Khalifa was nowhere to be found as his classic “ATL Freestyle” video was displayed on the big screen for everyone to witness – bringing back old memories of the Young Khalifa during his come up. 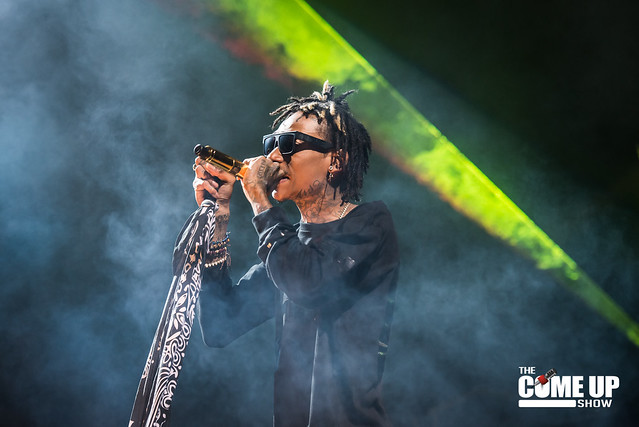 From there, Khalifa kept moving forward with timeless songs including the smash single “Say Yeah” as well as “Ink My Whole Body.” Hits from his 2010 classic Kush and Orange Juice followed as the Pittsburgh rapper performed “The Kid Frankie” and “Up.” Teasing fans by saying the name Juicy J, we all thought the Trippy Mane would make an appearance with “Show Out” playing in the background, unfortunately that wasn’t the case as Juicy is currently touring to promote his new album Stay Trippy, available in stores August 27. Regardless, Khalifa remained persistent and performed “This Plane,” the only single from his 2009 album Deal Or No Deal.As the O.N.I.F.C track “Remember You” began pounding over the speakers, anticipation for The Weeknd to make a special appearance could be heard. Hitting the stage, dressed in all black was Abel as the R&B singer dished out his verse to the crowd, eventually saying “Toronto make some fucking noise.” Moving along, Khalifa performed “Let It Go” and even added a verse stating “I just had a kid, now homie I’m the man.” Standing center stage, the Taylor Gang general began to sign a pair of Chuck Taylor’s, throwing them into the crowd while the entire TGOD lined the stage for the anthem “Taylor Gang” with Chevy Woods providing his verse as well. Up next was the biggest hit of all as Wiz gave us “Black and Yellow” while matching confetti was dispersed into the large audience. Wiz delivered his last song “Roll Up” as he was once again joined by the entire gang; spreading the message of peace and love to the thousands in attendance. 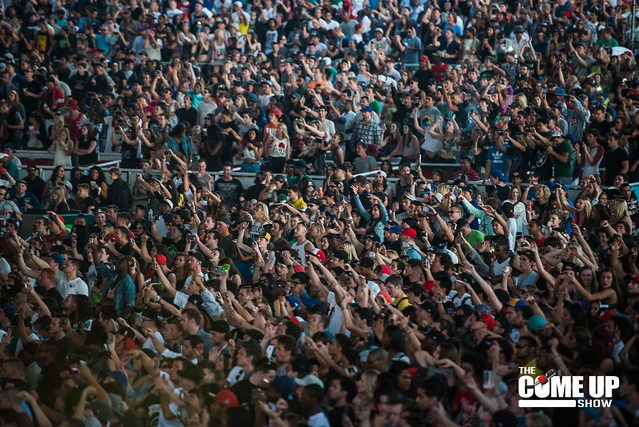 Having the privilege of attending the Under The Influence of music tour two years in a row, it’s obvious that this event is more than a concert; it’s a way for thousands to unite together as one. Every year the tour seems to get better as it features exciting talent drawing crowds of thousands of people. It’s safe to say that if OVO Fest was considered to be Michael Jordan than the Under the Influence of Music tour is Kobe Bryant. Taylor Gang or miss out on next year’s show. View all 101 photos from Under The Influence Tour on our slideshow below. Special thanks to Chris Brown from Overxpsr  for the amazing photography and Livenation for the media access.

Review by: Michael Lavictoire for The Come Up Show.