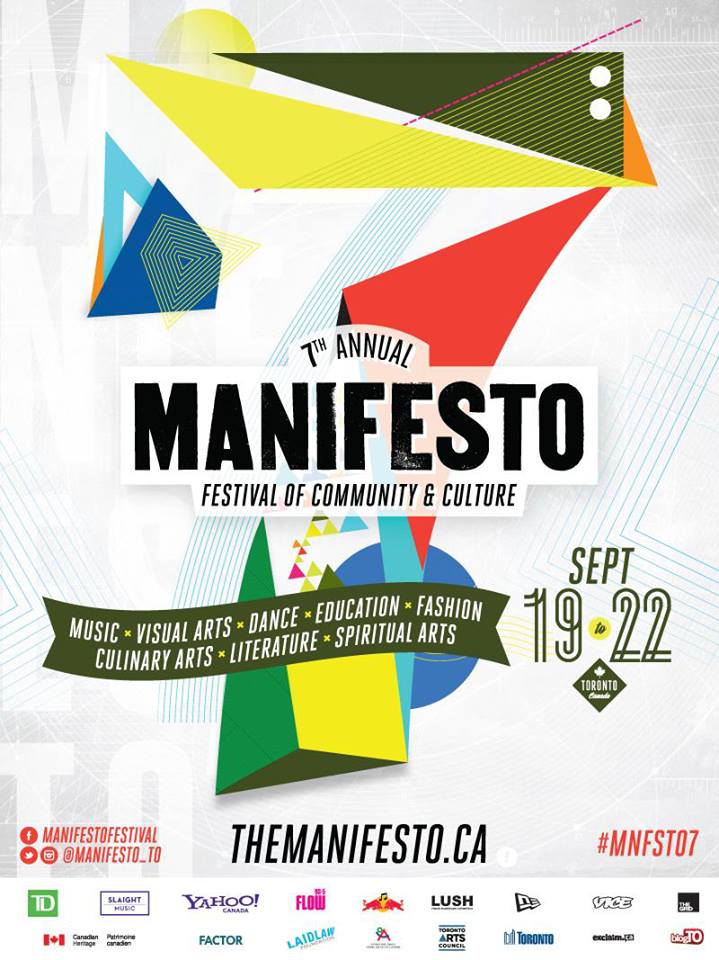 Get ready Toronto – Manifesto’s 7th annual Festival of Community and Culture is coming September 19 – 22, 2013, celebrating the arts, community and culture through a unique experience that only Manifesto provides. Come out and see what talented local and national artists have to offer from dance, music, art, education, comedy, food, clothing and crafts, and so much more. Manifesto’s annual Festival of Community and Culture is a celebrated event in Toronto which attracts over 40,000 attendees over a span of four days. The mission of the festival is to showcase creativity and culture from diverse communities of young people and to support top notch talent. P.S. Make sure to check out our video of us hosting the First Look Cypher featuring Casper, Dante Leon, Ashton Martin.

DAYTIME EVENT >>>
So Much Things To Say: Evolution Summit
An inspiring array of panel discussions, keynote speakers and mentor classes.
All the following panels and sessions will be at George Brown College Waterfront Campus (51 Dockside Dr. – just East of Jarvis)
When: Starting at 12pm and ending at 8pm.
Admission: $5 Advance price / $10 at door
Tickets & Registration: https://manifestosummit.eventbrite.ca/

MENTOR CLASSES:
Behind The Boards
This mentor panel will focus on the evolving principles surrounding production, offering a chance to learn first-hand from both established and emerging producers.

The Social Media Evolution
Join us for this mentor panel to learn tricks of the trade from key voices in hip-hop culture and social media, who have each achieved success in both the background and forefront of the digital realm.

The Power of P.R.
Generating a presence in journalism and social media, in addition to great music, often heightens an artist’s brand. Whether it’s an interview, album review, or featured article, artists regularly turn to public relations companies and services to create their media presence and get heard.

Awards Include:
Artist of the Year
Up Next
Education & Mentorship Award
Innovation in Dance
Community Contribution
Event of the Year
People’s Choice Awards
T.O. Legend

4:00pm
Heartist Panel: Heartist will host a panel discussion and audience talk back about the growth of mentor-mentee collaborations in Canada and the ways in which they work and add value to the health of the Canadian arts sector.
RSVP to: rsvp@themanifesto.ca

4:30pm Dinner, Dance & Dialogue (co-presented by Duo, Tapa, Volcano, York University): A discussion on issues vital to the urban dance community including professional wages, community representation and the creation of space for dialogue and more.
Event is Free | Meal Is $10 | RSVP To: dance@themanifesto.ca

Live At The Square
Canada’s largest all-day, outdoor celebration of hip hop culture and beyond!
When: 12pm-11pm
Where: Yonge & Dundas Square
FREE!

Dance also on the main stage: