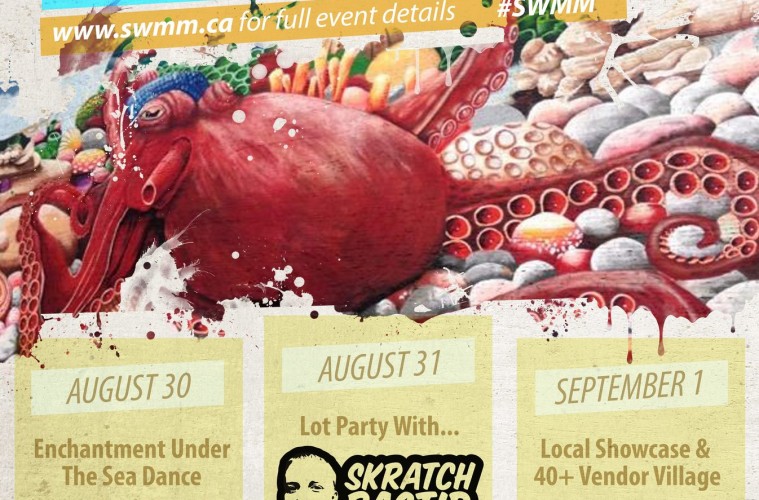 This weekend in London, Ontario, Artfusion Gallery presents a three day block party to unveil the Stephen Watson memorial mural. The mural, which depicts his last piece of artwork titled “Octopus’ Garden 2” is made in memory of the late Stephen Watson, an artist who was very passionate about the preservation of the world’s oceans. With three day’s packed full of different activities for all to enjoy, this is an event that breathes London art culture blended with it’s music culture as well and is definitely something you don’t want to miss out on. The support of the community is certainly welcome as all proceeds will be donated to the Stephen Watson Memorial Mural project.

Day one August 30th from 5pm to 10pm features an Enchantment Under the Sea Dance, Mural Unveiling and dance co-hosted by Fresh FM. With a $5 admission, kids under 12 get in free to enjoy London’s art and culture, live painting, live music, a special light show, craft vendors and more.

August 31st, the day of the block party, includes a full day of hip-hop acts from 11am to 4pm with a $5 donation required, after 5pm through 11pm it is a 19 plus event with a $10 admission. This includes performances by Kings of Nothing, Lionize Prime, Wise Boyz Noize, Madhattr and Exity Only, The Nicest, DJ Hullewud and BNutz. There is also a Road Warrier Battle hosted by Albino Zebrahz, a BBoy/BBgirl competition with cash prizes. DJ’d by top notch producer Skratch Bastid himself presented by Artfusion, London Music Hall and NEC Productions. The official after party will be held from 11pm to 2am at TABU Nightclub, 539 Richmond Street right below Jack’s.

Day three on September 1st is as craft vendor village and local showcase including a live concert featuring special guest Rochester from Toronto accompanied by DJ Ruckus. A $5 minimum donation is suggested. There are many ways to contribute to this event so head over to SWMM for further details on how to donate and help the building of London’s biggest mural in memorial of Stephen Watson. We hope to see you there!

What: Artfusion Fest 3:The Unveiling of the Stephen Watson Memorial Mural featuring Skratch Bastid
Where: The parking lot on the corner of King St. and Clarence St.
When: August 30th, August 31st and September 1st.
Admission: Tickets can be bought at Artfusion Gallery, Ticketdriver or $10 at entrance.