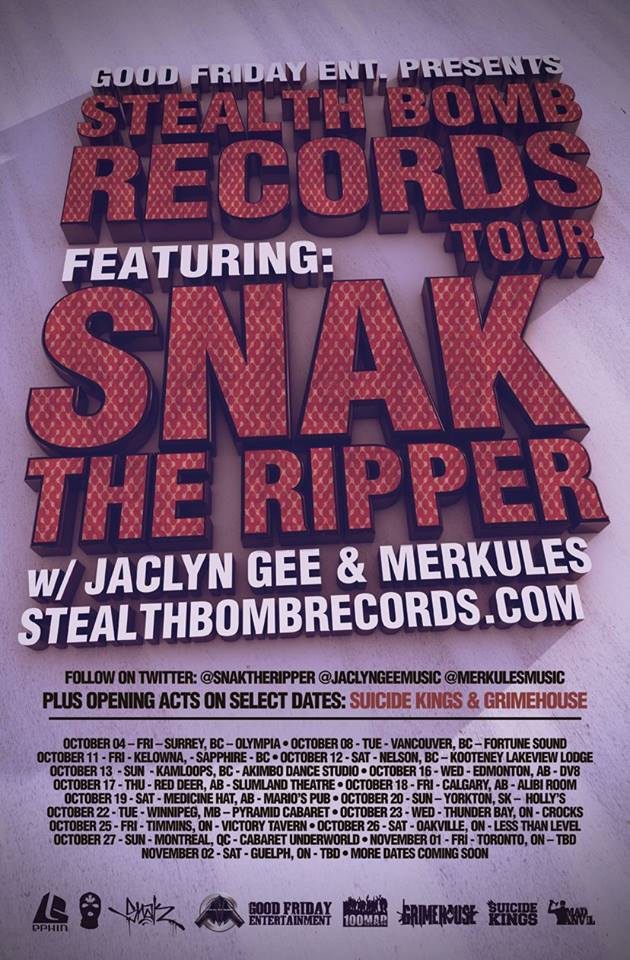 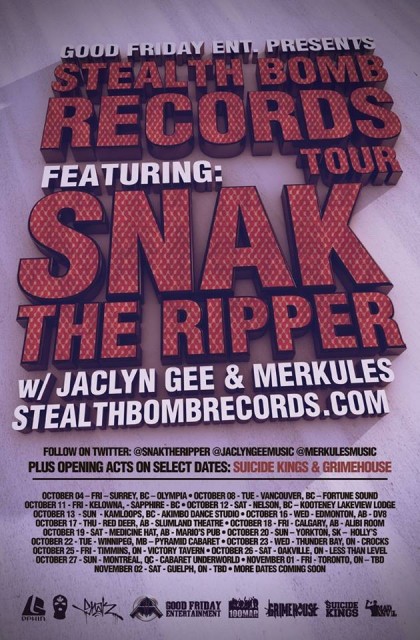 With a fresh new record label founded by himself in July of this year called Stealth Bomb Records, Snak The Ripper is heading on tour across Canada with Jaclyn Gee and Merkules in celebration of this to finish of what has been a great year for Snak The Ripper. With a following that has been growing rapidly over the years, Snak has been an influence to underground hip-hop heads, graffiti artists and just all music fans alike; Exclaim Magazine describing his shows as “Energetic Debauchery” this is definitely a show coming to a city near you that you do not want to miss out on, especially if you enjoy raw and uncut music. Snak is undoubtedly one of the hardest working artists in Canada, his latest release White Dynamite selling over 10,000 units independently is proof of that. Starting in Surrey, BC the tour will end in Guelph with stops in every major city along the way; Suicide Kings and Grimehouse will be playing at select city dates as well. With a ton of different opening acts in each city, this is bound to be one of the most talked about tours of the year and trust me you will regret missing a show that comes to a city near you. We will be out at the London show which you can RSVP to after the tour dates below.

What: Good Friday Entertainment Presents: Stealth Bomb Records Tour Featuring Snak The Ripper, Jacklyn Gee & Merkules
When: Tuesday, October 29th, 2013
Where: The Soundbar located at 153 Carling St. London, Ontario
Admission: (19+) $15 in advance, $20 at the doors. You can RSVP here for the London show. Tickets are available through promoters in each city, which can be contacted in the event pages. For tickets in London contact myself here