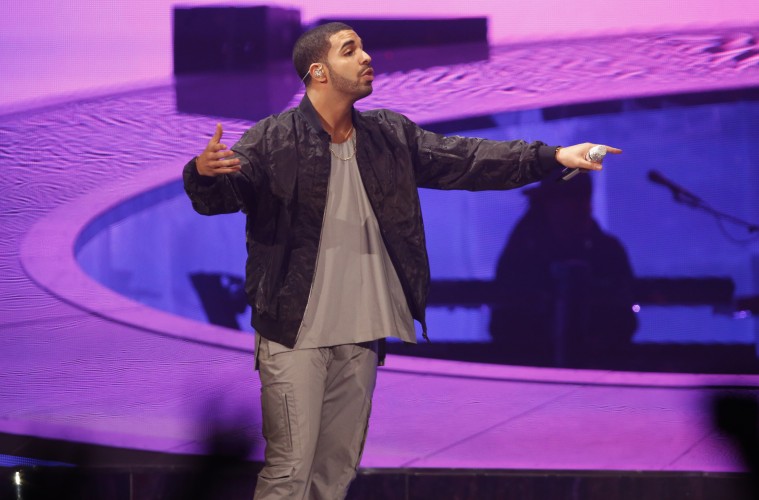 When you think of celebrating your birthday, you likely envision an entire day spending time with your family and friends. As for Aubrey Graham, this was especially true, except this time it would be on a much larger scale. On October 24th, 2013 Toronto’s (and October’s) very own Drake performed for nearly 20,000 fans at the Air Canada Centre as part of his “Would You Like A Tour”. Joining the superstar that special evening would also be PARTYNEXTDOOR, Miguel, and Future.

The doors to the ACC opened up at 6:00pm with the show starting at 7:00pm, making it tricky for those with tight schedules to reach the arena in time for the opening act(s). Luckily, for many that didn’t seem to be a problem. As I opened the doors to “Gate 1” madness ensued. Parents, adults, teenagers, and children could be seen in every direction as they hurried to get to their seats on time. After making my way to the front of the overcrowded box office line, my ticket was given to me with only minutes to spare before the show. Finally seated, those including myself were more than ready for the night ahead.

First Up, PARTYNEXTDOOR. While it wasn’t initially announced in the beginning, Drake made it clear via his Twitter account stating that PND in fact would be joining him on tour as well. Performing songs off his self titled debut project, including “Make A Mil, “Welcome To The Party”, “Right Now”, and “Break From Toronto.” Although the Mississauga native may have not sounded the greatest live, it’s also understandable that it’s his first tour, pointing out he also came across as calm and collective during his set.

It was also rumored that due to comments made in an interview with BillBoard, Future was dropped from the tour. The news spread quickly but the rumours were shot down and it was later confirmed that he would, indeed be one of the main acts. Future really turned up the crowd performing hits such as “Chosen One, “Racks”, “I Wanna Be With You”, and the infamous “Karate Chop”. Considering it was his first time not only in Toronto but Canada as well, it was a rare but refreshing opportunity to see one of the most talked about artists in the industry perform live.

It was now 8:00pm and during a brief intermission stagehands could be seen setting up band equipment for Miguel and his entourage. In the midst of fans running down the aisles, emerging from the darkness was Miguel as he hit the stage; dressed in a leather jacket with bristled sleeves. Celebrating his Birthday on (October 23) a day before Drake’s (October 24) Miguel requested that the audience sing “Happy Birthday” to the two, in which they did. As the lights on stage shone brightly, Miguel displayed his vocal talent and with a guitar draped around his shoulder, loud screams echoed throughout the venue during “Adorn.” The singer took one last moment to say, “You guys really are beautiful” as he dedicated “Adorn” to all of the beautiful women in the audience, as the platform he stood on eventually lowered beneath the stage. After his set, concertgoers had one last interval before Drake. Walking into the hallways, fans could be seen purchasing OVO merchandise, drinks, and food before frantically running back to their seats.

Although the opening acts did a great job, the crowd was still left hungry for more. As thousands patiently sat in anticipation the lights dimmed, as cheers of excitement took over the entire Air Canada Centre. Surfacing from behind, the birthday boy took his stance on the unique stage setup and opened with “Tuscan Leather” which lead into crowd favourites including “Headlines” and “Crew Love.” Continuing with songs off of his new LP, Nothing Was The Same, Drizzy performed “Furthest Thing” and “Wu Tang Forever.” In his lyrics for “Connect” Drake says, “I take Eglington to 401 east/ and exit at Markham road in the east end/ where all the pretty girls are sleeping” which ultimately saw an immense crowd reaction as he continued to name exits including Mississauga, Pickering, Brampton, and many more resulting in cheers.

As onlookers were hypnotized by his stage presence, Drake performed his verses from chart topping singles including, “Pop That”, “No New Friends”, and “Fuckin’ Problems.” Returning to the stage was Future who joined Drizzy for a short set which included previous work from the two, such as “Bitches Love Me”, “Tony Montana”, and “Same Damn Time.” Although it was brief, the performance further highlighted the chemistry that the frequent collaborators possess.

Arguably holding the title for the best verse of this past summer, Drake showed no hesitation as he jumped into “Versace” before rays of blue light took over during “Pound Cake.” Slowing things down with “The Motion” and “Come Thru,” Aubrey surprised us as Jhene Aiko made an appearance, taking center stage in a long, elegant dress. Taking a seat on the stairs next to her, the spotlight was given to Jhene. While the two performed “From Time”, fireworks lit up the stage before Drake disappeared for a wardrobe switch. It was at this time that Drizzy’s DJ, Future The Prince entertained the audience with older material from Drake’s catalogue including Successful, Uptown, and Over, among others.

As smoke poured out onto the stage like mist in Sleepy Hollow, the Toronto native re-emerged wearing an outfit with print depicting blue skies and clouds – similar to the album artwork for Nothing Was The Same. Regaining the attention of the audience, he performed the smash single “Hold On, We’re Going Home” as thousands sang along in sync. Claiming that every city has their anthem, Drake said, “This is Toronto’s anthem” as he performed “Worst Behaviour” followed by “Too Much” and “The Language” which were three of my personal favourites. Admitting that songs such as “No Lie”, “I’m On One” and “HYFR” would be typical, they still managed to gather excellent crowd participation regardless.

There may not have been any surprise guests, but nobody could have imagined the element of surprise when a large catwalk descended from the rafters. As “305 To My City” played in the background, Drake walked onto the platform as he personally gave shout outs to specific audience members while rising back up towards the rafters. Further shout outs included his Mother and High School teacher as well. Yes, it was impressive to see but looking further, it was also a thoughtful gesture to give those who may not have had “the best” seat in the house an unforgettable experience. Capping off an incredible performance, Drizzy performed “All Me” (even singing Big Sean’s verse) and “Started From The Bottom” as images and video throughout the earlier years of his career were displayed on the screen behind them – giving us an idea of how far Drake has come as an artist.

At the end of an amazing night, Drake held his microphone and said, “For the first time in my life at I’m a loss for words” and there was no denying the crowd was too. If you were one of the thousands in attendance that night than you know the best gift of all was the one that Drake gave us. Basking in the cheers from the crowd for a job well done, he left us with one last comment saying, “See you at OVO Fest” before the 27 year old exited backstage.

Written by: Michael Lavictoire for The Come Up Show
Photography by: Patrick Currah at Universal Music Canada, LaTasha Gray & Anil H.
Special thanks to Live Nation for giving us access to the show.