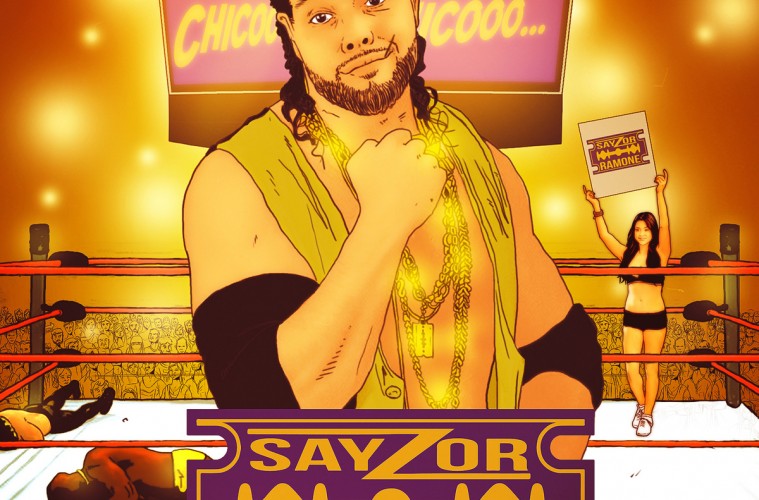 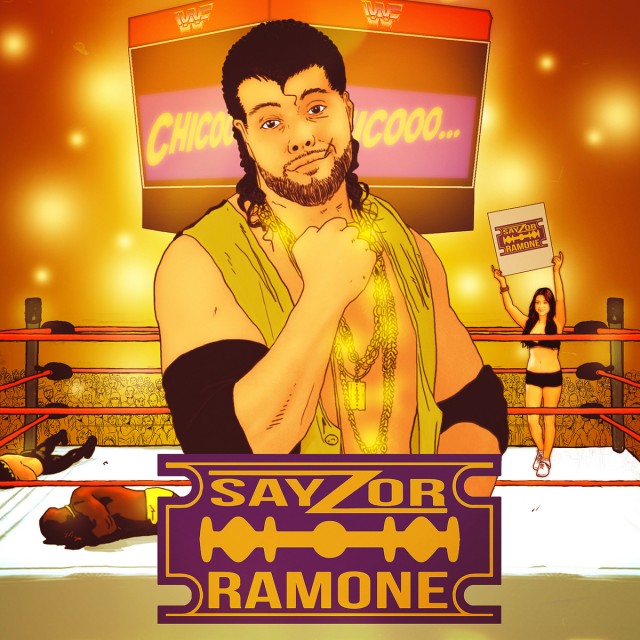 Ever since first coming across Sese’s music in my “Youtube Vortex” days; stumbling into the track “Iron Jaw Angel’s”, I was instantly a fan. Of course when you come across an artist that’s new to you, you have to go back and do your research, while in the midst of that I was constantly impressed with how dedicated he was to his craft. Dropping eleven videos in a row with G-Dot, the YFRWN series, a slew of remixes over some of the most popular instrumentals at the time, several other mixtapes and more! It still doesn’t cease – nor will it ever I believe. At the beginning of the year Sese released his first EP Age of Aquarius, which followed Aquarius Rising, not even a month after he announced another project he was working on, Sayzor Ramone.

Quoting the write up for Sayzor Ramone, “Channeling over the top charisma, brash lady’s man bravado and technical skills to put him a cut above the rest comes as second nature. The parallels between he and his favourite wrestler the WWF’s Rayzor Ramone character are endless on his new 8-Track offering aptly-titled, “Sayzor Ramone.” “I just [really] wanted to embody that charisma he had. He was all about the ladies and dressing the best, but on top of that he was a top competitor and his talent overshadowed his cocky bravado,” says Sese of his new collection. Giving fans and music lovers a high energy ringside like experience is heard throughout the offering. “I just wanted to make a cohesive project. I wanted it to be high energy, and it to embody that feeling of stepping into the ring, the crowd, the lights, the theme. I wanted it to feel very over the top… No Royale Rumble.” Boasting a mix of some frequent collaborators, and the introduction to some new sound masters, “Sayzor Ramone” flows from top to bottom. With features from Luu Breeze and Hardbody. And, production from Jayze, 2oolman, Superville, The Workx and UTVMG in-house producer Jmakbeatz the sounds are bass heavy and high impact.”

Thanks to Sese and Aristo Music Group we at The Come Up Show had the opportunity to thoroughly take in Sayzor Ramone over the past two weeks, below is a track by track break down of the album for you to enjoy before the official release tomorrow, December 3rd.

Making his way into the ring, Sese or Sayzor Ramone sets the tone for the whole EP with the introduction as the announcer’s throw a little bit of criticism out before the match begins. You can only imagine what happens next, but as Sese said in the interview, you can only show and prove.

The transition into “Chico” off the intro is key, it’s a hard hit into what you’re about to experience. Produced by Jayze, the instrumental screams anthem off the jump – and I mean play it on any type of sound system you want, it knocks, preferably one with more bass though. Wasting no time, Sese talks his game before absolutely annihilating this one, making some references to the YFRWN series within it, the constant quotable’s, bars upon bars, “Chico” makes for a good introduction to the EP. It’s definitely the most reflective of the concept of Sayzor Ramone and I’d say the lead single for the EP as well. “These other teams just isn’t equal, they need a Chico, Versace chain but not the Migos, Medusa snake b*tch, Good Friday we ate fish, I’m sitting at a whole new apex, got this money on my tongue I taste it”

Keeping the energy going, “Light It Up” featuring Hardbody takes a break from the fast paced in your face bars you encounter on “Chico” and slows the pace down ever so slightly for the smokers. Produced by UTVMG’s in house producer Jmakbeatz, the spacey sounds you experience when listening to this go hand in hand with the content of the song perfectly, Sese always making outer space references in various songs, you definitely get brought up to another level – especially if you smoke before listening to it. Bringing in the first of two features on the EP, I couldn’t picture anyone else on this track besides Hardbody, the vibe he adds to it amps it up that much more. It’s evident Sese can do a track and make a great one at that without a feature, but when he does bring in features they come across as strategically planned. If you’re a smoker, love hard hitting, bass knocking beats with some crazy flows, “Light It Up” is one for you, and it only gets better.

“Sayzor’s Edge”, the most personal track on Sayzor Ramone I find was inspired by Razor’s Edge, it was Razor Ramone’s special move where he would throw his opponent up over his back holding them underneath their arms in an almost crucifix like position, slamming them forcefully into the ground, and Sese most certainly took that and made a track that does the exact same to the listener, as well as those “wack” rappers who choose to step in the ring. Produced by Superville, “Sayzor’s Edge” speaks on the difficulties of being an up and coming rapper, his thoughts on that. Starting it off with “no time to waste, no time to be still, it’s time and feel like I’m climbing a hill, but I’m climbing, and the winds are so violet, speak no evil I kill them with silence”. The hook serving as that moment when you hit the ground after being slammed, he continues on with “training in the gym now I got my weight up, opposite day I really love my haters, alien flow so my laser is major”. This being the most mellow of the 8 tracks on Sayzor Ramone, it’s great as always how Sese brings that personal feel and crafts it into a song that instantly catches your attention. Although since he’s released this one as well you can listen for yourself.

With a Jamaican feel to it, “Bom Bom” is the more laid back on the EP, Sese spitting his game to the females – talking to one in particular with lines like “baby your book is open, and I’m about to read it, your body like a body bag and I’m about to beat it”. He gets straight forward on this one, but the ladies do love a man who knows what he wants I know that for a fact. “Bom Bom” also produced by Jayze seems like the track they have the most fun with, the sample and tone of the beat make for a track anyone can enjoy, witnessing that first hand at the show the other night.

For track six, Sese and long time collaborator 2oolman team up for “Designer Death”. Bringing that slick talking bravado back, Sese talks on the success so far from his grind, leaving some advice for other artists as well. The hook chanting “Turn a hundred dollars to a hundred grand, do it to the max but you don’t understand, you too busy playing hangman, you don’t want to work, you just want to hang man” . I’m a big fan of any track Sese and 2oolman collaborate on, and their track record shows they always come with that fire, “Designer Death” being the most recent of many!

The one song truly for the ladies on Sayzor Ramone is “All Night” with the second feature on the EP, Luu Breeze. Although it’s not your typical song for the ladies talking about love, it’s more a song about a rendezvous. “All Night” basically says it all in the title. Whenever Sese and Luu Breeze join forces they always set a new bar from their previous tracks and it always just gets better and better.

The last song on Sayzor Ramone “How You Want It” produced by Jmakbeatz, is Sese basically speaking in song what he spoke on the other weekend on The Come Up Show radio about how he won’t change what he does to gear his music for a certain audience, he’ll always stay true to his craft, but also almost serves as a response to those who are critics, asking them “How You Want It”. Kicking it off with, “those cannons aiming for you, leave you frozen like a statue, my life is narrated written in the Book of Matthew, so I put it on the Bible lord, swear it on my soul to kill my rivals, homicidal law”. “How You Want It” makes for the perfect track to complete Sayzor Ramone, anything Sese talks he definitely backs up, and this one puts it all in perspective for you.

As a whole, Sayzor Ramone is an ideal project from Sese, a perfect concept for him to use. Embodying the characteristics of his favorite wrestler, channeling his own personality and life experiences through it is one hundred percent on key. It’s evident Sese can spit bars, make club tracks, songs for the ladies, which on this one is the perfect combination of all of that, he doesn’t stray from making music for his core fans, but definitely made an EP that you could hear playing the clubs, parties or wherever and I mean any song from one through eight. I’m always a fan of when Sese goes in on some “60 Bar Chainsaw Massacre” type tracks, but since AOA he has been playing a lot more with making music that pushes him and the growth is visible. Although I almost wish there was more than 8 songs on Sayzor Ramone. Without a doubt Sese has 2 of the best EP’s out this year and I can’t wait to hear what he’s cooking up next. Until then, make sure you go get your copy of Sayzor Ramone!