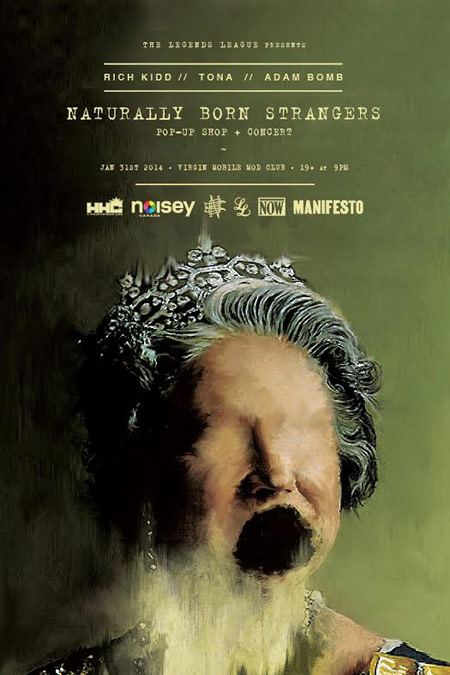 On Friday, January 31 2014, Naturally Born Strangers (Rich Kidd, Tona, Adam Bomb), will be performing at Toronto’s Virgin Mobile Mod Club for a special concert and pop-up shop. The event will be sponsored by NOW Toronto, Noisey, HipHopCanada, and Manifesto. Presented by The Legends League, music will be provided by DJs Nana, Soundbwoy and Wristpect. Check out the full details after the jump.

“Naturally Born Strangers represents those born and raised different who don’t associate themselves with the common communal circles. It’s a proclamation of pride in the power of being disliked, unwanted or obscure, weird or foreign to the norm. It’s for the stranger and the more strange, the new community of outcasts, the antithesis to the neighbourhood and the cynics of its circles. NBS is the umbrella title to those influenced by much, deterred by nothing and unknown the world over. It’s a reflection of our societies vision of ‘normal.’ The queen is represented to create familiarity but has been tainted to identify the strange. It’s fuck government, fuck the system, fuck money, fuck fame, fuck art.”