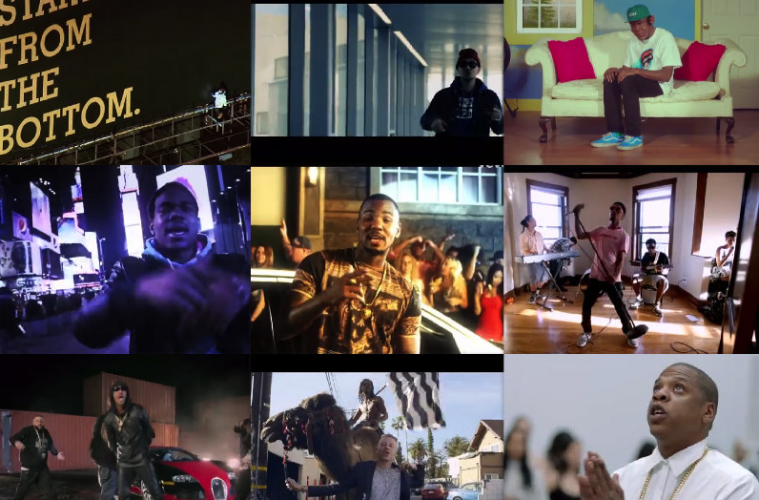 [Staff Lists] The Come Up Show’s Favourite Videos of 2013 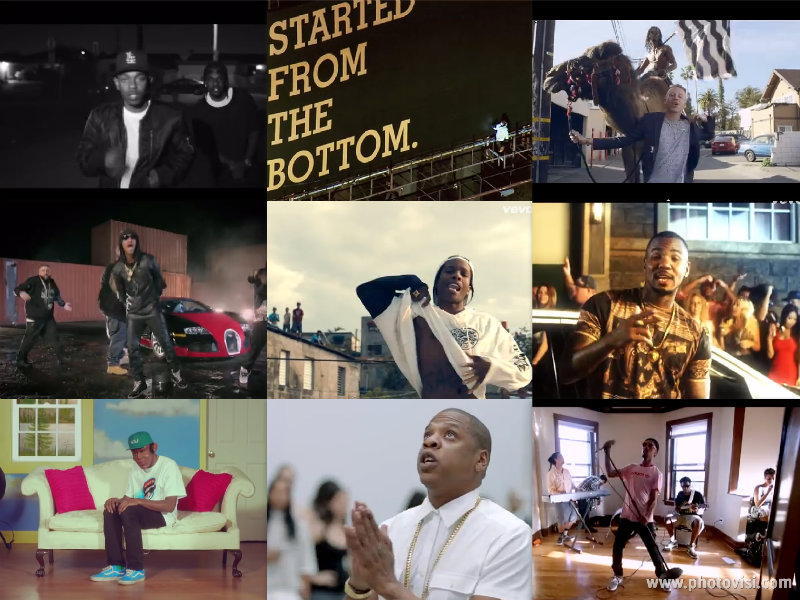 2013 was a fine year for hip-hop videos. Not only did Drake win the BET award for “Best Hip-Hop Video”, Macklemore & Ryan Lewis took home the VMAs “Best Hip-Hop video” for “Can’t Hold Us” ft. Ray Dalton and Classified ft. David Myles won “Video of the Year”, “Best Hip-Hop Video” and “MuchFact Video of the Year” for “Inner Ninja” at the MMVAs. Music videos always add another dimension to the track, but while they can make us think of a song in a new light, at times they can leave us scratching our heads. Below are The Come Up Show’s staff list of our favourite hip-hop videos of 2013 that blew our minds.

“Alright, alright, you get the picture. I really liked Acid Rap. But “Juice” deserves recognition in its own right. Austin Vesely’s work on the “Juice” video is remarkable; if you haven’t done so before, take a moment to look for all of the Easter egg graphics hidden in Times Square. Match that with a ridiculously catchy song, and you’ve got a winning combination.” – M-Bomb

“So. Awesome. This video is pretty cool. Actually, it’s brilliant. Monty takes us through the eras of hip-hop, starting from the 80′s to present day, paying homage to the legends of each era in a unique way. I love the jazzy instrumental, laid-back vibe and the smoothness of Monty’s rhymes- not only does it make it a fantastic track, but it fits the theme of the video like a glove.” – Eternity

“I WOKE UP IN A NEW BUGATTI! That’s pretty much how this video starts. With Ace Hood passed out in the driver seat being woken up by the police. The rest I’m assuming is everything that led up to that moment. We see Ace Hood running away from enemies holding shotguns and chasing him down with an ATV. After narrowly escaping that, we see Ace meet up with Rick Ross and a few other dons that are all playing high stakes poker. The quality of the scenes and the amount of time director Gil Green took to get the shots exactly right made this video feel somewhat like a movie.” – Colosso

Drake – “Started From The Bottom”

“From rapping in a convertible Bentley to working at Shoppers Drug Mart, Drake captured it all in his video for “Started From The Bottom”. Directed by Little X and Drake himself, the visuals take us on a trip, proclaiming just how far Aubrey has come in the industry. Drake’s OVO crew members, OB O’Brien and Ryan Silverstein also appear in a hilarious skit, also featured in the video. The fact that Drake represents his city throughout the entire video earns him the title for one of the best videos of the year.” – Mlav

“I loved GQ’s Death Threats & Love Notes, and “The Town” is a big part of the reason why. 9th Wonder’s piano-laced production is so soulful, and GQ’s hunger here shines through: “What’s status to a n—a living average, in the basement just waiting for the attic?” The video is a clever nod to GQ’s hometown of Oakland, as well as the Ben Affleck-directed The Town. I’ll tell you one thing, I’m definitely looking forward to Rated Oakland.” – M-Bomb

“This year, on Valentine’s Day, J. Cole released the visuals to “Power Trip,” the lead single from his album, Born Sinner. The song features RnB crooner, Miguel and shows Cole as he obsesses over the girl he desires, all while articulating a plan to kill her boyfriend. Although the video is simplistic, it offers a twist and leaves a powerful message in regards to the lengths one may go to in the name of love.” – Mlav

“J. Cole went all-out this past year on music videos. Between this and “Crooked Smile” (mentioned in greater depth below), the Fayetteville emcee raised the bar, delivering two cinematic videos that really feel more like mini-movies. With the “Power Trip” music video, a good song gets even better with the visual treatment.” – M-Bomb

“Tyler, The Creator’s videos are all directed by himself so they’re always a little obscure, and the “IFHY” video did not disappoint. Right from the beginning we see Tyler (or what looks to be Tyler) with a plasticized face to make him look more like a doll. We are eventually introduced to Tyler’s doll girlfriend who, throughout the video, looks to be on the tail end of some sort of argument. The video ends with a taste of the song “Jamba” where we see Tyler, The Creator and Hodgy Beats driving around acting foolish. It’s a really unique, funny and creepy video that only Odd Future is known for. With music video ideas like these, it’s no wonder they have their own show.” – Colosso

“Another ridiculously catchy song. I don’t think Vic gets enough credit for this, but he’s got some pretty decent vocal chops. In the aftermath of Chance’s Acid Rap, “Orange Soda” served as a reminder and came across loud and clear: don’t forget about Vic. He’s got some serious skills. Verluxe’s work on the video is solid, too.” – M-Bomb

“Strolling the dark streets of Compton, Pusha T and Kendrick Lamar brought “Nosetalgia” to life. Straightforward and dark, the visuals were more than fitting as the two exchanged unforgettable verses for one of the standout songs off Pusha’s My Name Is My Name. The foundation created by Nottz and Kanye West, is balanced with the lyrics of two of the best MC’s made for a well-rounded video.” – Mlav

“The video for “Nosetalgia” is proof that sometimes less is more. No extravagant sets, no big budget gimmicks, no flashy visuals, just two top-notch emcees delivering some of the best verses of the year.” – M-Bomb

“There are several reasons I love this video: first, there is nothing more attractive as a Women’s Studies student and female hip-hop lover, then to see some of our favorite and popular hip-hop artists bringing back a little bit of chivalry in this video (not to mention, there are fully clothed girls all about in this video- well, for the most part). Second, the soulful, upbeat, gospel background as if you were at a Sunday mass in the 1920’s is a sample of D’Angelo’s “Lady”. As usual, Jeremih always soothes on a chorus, while Big Sean keeps it straight up with a verse that may have you laughing and wincing in one breathe. But it’s Lil’ Wayne who kills it on this track with metaphors that would take me five lifetimes to create. The New York Times also praised his verse in the song in a review of the Jesus Piece album.” – Eternity

“Admittedly, I am not huge on the song itself, but the video for “Crooked Smile” is heart wrenching. It follows the tale of 2 people, J. Cole and a D.E.A. agent trying to take Cole down. Throughout the whole video we see the 2 men proceeding on with their usual days, J. Cole getting ready for his daughters Birthday party while the other man enjoys his morning fooling around with his daughter. While J. Cole and family are celebrating life, the D.E.A. agent is going over strategies of acquiring J. Cole’s character. When the two men’s paths intersect the outcome is gut-wrenching. Sheldon Candis is the director of this video, or, I should say short film, because this is powerful enough to be featured in a film festival.” – Colosso

“Earlier in December, Sese brought us his second album of the year, Sayzor Ramone. Sese dropped visuals for the album’s third track, “Light it Up” featuring Hardbody and Jmakbeatz. Director So Tee Oh, brings the track to life with striking visuals and graphics. Sese fills out the checklist for everything you love about grimy Hip-Hop videos with this piece- heavy beat, nice rhymes and 40’s of Old English. “Light it Up” is a banger for sure, I’d highly recommend giving this video some views. If you haven’t had a chance to listen to Sayzor Ramone, you’re missing out on some entertaining Hip-Hop.” – Michael K

Taking place over three months and in 6 continents, Macklemore & Ryan Lewis delivered an EPIC video for “Cant Hold Us”, off their collaborative album, The Heist. The breathtaking visuals capture moments on the sea, in the air, and on land as well. We’ll have to see if they win a Grammy after being nominated for Best Hip-Hop Video (I’m sure they will). This is feel good music.” -Mlav

“This song actually came out a couple years ago, but the video dropped in 2013, so it makes the list. “Look My Way” is one of my favourite songs off The Mint Condition, and it’s only right that it got the visual treatment. Kaleb Simmonds’ performance is incredible, and the throwback video, directed by Jon Eagan, came out really well. The whole thing just has an undeniably feel-good vibe.” – M-Bomb

“Call it a video. Call it a performance art piece. Call it whatever you want. The video for Jay Z’s “Picasso Baby” was a different experience altogether. At the beginning of the clip Jay says, “Concerts are pretty much performance art with the venues change,” And just by nature, the venues determines how the performances change, right? “You’re in a smaller venue, it’s a bit more intimate, and you get to feel the energy of the people.” That’s exactly what he did, inviting several people to an intimate video shoot filmed at the Pace Gallery in New York City. Throughout the video you can see how much fun everyone is having and that’s what music is all about.” – Mlav

“Gotta love this video. Filmed in the Dominican Republic, little boys cooler than grown men chant “A$AP Mob!” before we get an overview of some of the grittier parts of the nation. Not only is this video a nice change of scenery, but I love how the entire community- from children to elder people- join in on the fun.” – Eternity