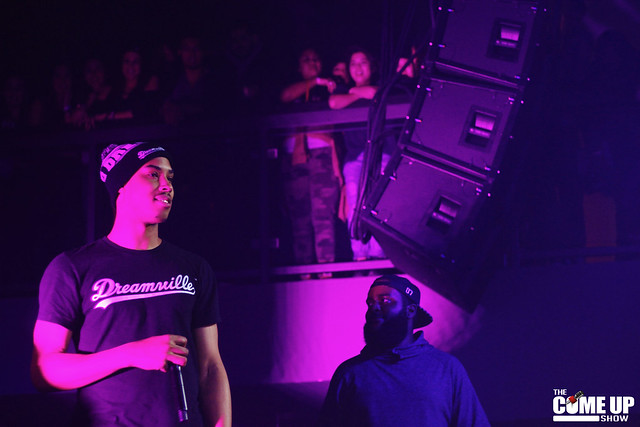 We had a great interview with Dreamville’s Omen recently, when he joined J. Cole on the Canadian leg of the What Dreams May Come Tour. We spoke for nearly half an hour about everything from Omen’s early album influences, to his family’s musical history, to avoiding foolish pride.

On his family’s musical history:

“21st Century was my dad’s [group] – my dad was a singer. He still sings; he’s an incredible singer, one of the best singers I’ve ever heard – not because he’s my father. He was signed to a Motown group called 21st Century. Actually, they changed their name from 21st Century to 21st Creation, but he was the lead singer. He sounded just like Michael Jackson – you know, just a throwback child heartthrob […] They were known for this one big hit called “Remember the Rain” — it’s been sampled so many times in hip-hop. I think that’s where a lot of my passion for the music came from.”

“I don’t like to ask anybody for anything, [and] sometimes you need to ask people for things. Sometimes it’s [okay] to ask for help, but I’m so prideful sometimes that I’m like, I’ll find a way to do it myself. I really think that’s a Chicago mentality – we’re always on guard. The way we grew up, you’ve gotta always be wary of your environment, like, is this person trying to harm me? Does this person think I’m in a gang? I think that puts up a certain wall, and a certain sense pride – a foolish pride – that you don’t always need to have. It can lead to your downfall.”

We talk about all of that and lots more. Watch the interview below.