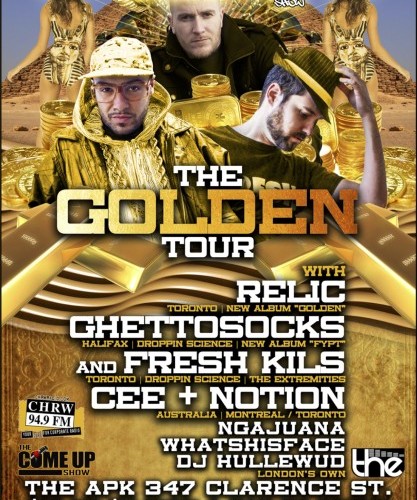 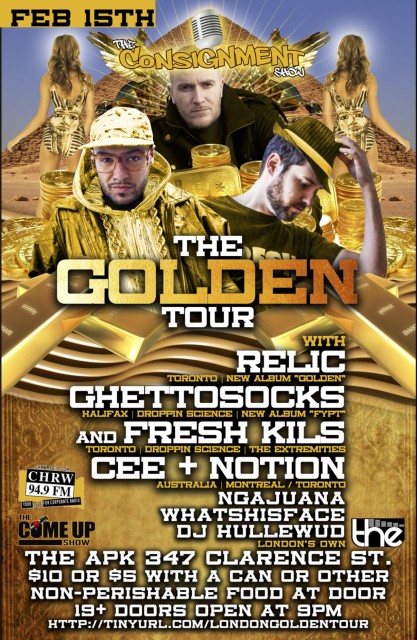 Last Saturday was a big night for London hip-hop as The Consignment Show brought The Golden Tour to APK. The bill for this show consisted of six talented acts, each bringing a unique and innovative style for fans to soak in. The lineup consisted of Ghettosocks, Relic, Fresh Kils, Ngajuana, Notion & Cee, and Whatshisface. Each set flowed nicely into the next, and DJ Hullewud kept the party rocking in between sets.

Whatshisface set the tone for the night with his set, getting the crowd excited for the acts that followed. After ripping through several solo tracks, Whatshisface brought out special guest Kettle Black, to help him end his routine. The two emcees’ styles complemented one another, as they traded bars back and forth in quick succession.

London’s Ngajuana took the stage next, keeping that live hip-hop atmosphere at the APK going. Having 475-plus songs to his name, as well as three CD releases, NGA is making a run for one of the top emcees in Canada.

Ngajuana took the mic, and instantly had the audience captivated with his hard hitting rhymes, word play and stage presence. NGA brought his act to the fans as he descended from the stage, spitting acapella verses right in the face of APK partiers. Each bar NGA let out with the mic had fans shouting with approval — NGA is one of the livest emcees I’ve ever seen, period.

Australian emcees Notion & Cee were the next to perform, getting the crowd live for headliners Fresh Kils, Relic and Ghettosocks. The duo began in their hometown of Melbourne, Australia. The Melbourne natives sold practically everything they owned last year and moved themselves to Toronto in order to live out their dream of sharing “Soul Hop” music with the world. As soon as they hit the stage to perform, they let the crowd know that the Aussies were in the building.

The duo’s track dedicated to their love of craft beer, “Brew Head,” had the crowd on their feet and drinks in the air as they chanted the song’s chorus along with the emcees. Fans yelled out their beverages of choice as Notion & Cee ripped their rhymes and chugged their drinks. Towards the end of their set, Notion & Cee took over Kendrick Lamar’s instrumental, “HiiiPower,” with original verses that left the crowd awestruck.

After a few giveaway prizes handed out by DJ Hullewud and host Tyler Hetherington, headliners Fresh Kils and Relic were up next, showing fans just what The Golden Tour was all about. Fresh Kils was first on deck, showing off his skills on the MPC. The first track Kils played was a classic Led Zeppelin sample chopped up with hip-hop drums — fans went ballistic as Kils slammed out beat after beat on the MPC keys. After getting the crowd nice and live, Relic hit the stage to give APK what they paid to see: live, innovative hip-hop.

Relic is one of the most versatile artists in Canadian hip-hop. His artistry as an emcee, DJ, producer, engineer and singer has allowed Relic to hone his craft to the fullest. The Toronto native has won multiple Juno Awards for his production work on Shad’s Old Prince and TSOL albums. This was the first time I had ever seen Relic live, and needless to say I was thoroughly impressed.

Relic’s humble demeanor in person is put to the side as soon as he steps on the stage and kills emcees. In his performance, Relic flipped John Legend’s single, “Ordinary People,” with his own soulful twist for his track “Ordinary Emcee.” The lyrics Relic belted out expressed how fake some artists can be while they perform, by contrast illustrating how his commitment to hip-hop culture puts him at the forefront of Canadian hip-hop. Relic went through his catalog of hits — his banger “Work of Heart” had everyone in the building turnt up. Few artists can rap and sing well live when they’re put on the spot — Relic is an exception. It would be a shame to have a talent as prolific as Relic’s go unnoticed; I would definitely recommend taking in all of his music.

To close off the night, Ottawa/Halifax’s Ghettosocks hit the stage with Relic and Fresh Kils to send the APK crowd home buzzing from the three emcees’ energy. Ghettosocks has had a very successful career in the hip-hop game. As a Juno-nominee, as well as one of CBC’s top 25 ranked rappers of all time, APK was fortunate to have such a talent come through and perform.

The highlight of the night for myself was when Ghettosocks took Pusha T’s instrumental for “Numbers on the Board” and assassinated it with his hard hitting rhymes. In my opinion, Socks took that record and made it his own (No disrespect to King Push, all respect to Ghettosocks). “Air,” the into for Ghettosocks’ latest album For You Pretty Things, was another record that was very well received — DJ cuts with soulful vocal samples and classic hip-hop cuts from Mos Def and Audio Two set the mood for a classic hip-hop show. The powerhouse of Relic, Fresh Kils and Ghettosocks shows just want talent true Canadian hip-hop has to offer. Fans who were at APK Saturday night understood and respected the privilege of seeing these amazing acts perform — from the first set to the last track the energy in the building was through the roof!

As the Golden Tour makes its way around Canada, I am urging all hip-hop heads to take this show in — YOU WILL NOT BE DISAPPOINTED, trust me. If you had a chance to catch the show, we want to hear from you! What was your favorite performance of the night? Did you get an opportunity to purchase any music from these amazing artists? And if any of these acts come through London again will you be there? Let us know in the comment section below. Hit the links below to get an exclusive interview with the performers, as well as audio from the event.

The Consignment Show Presents: The GOLDEN Tour (Live To Air from The APK) by Consignmentshow on Mixcloud

The Come Up Show Presents – The Golden Tour Interview (February 15, 2014) by Thecomeupshow on Mixcloud