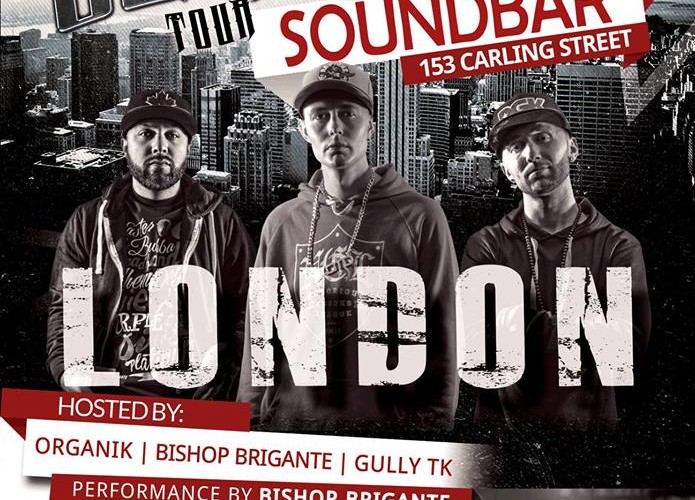 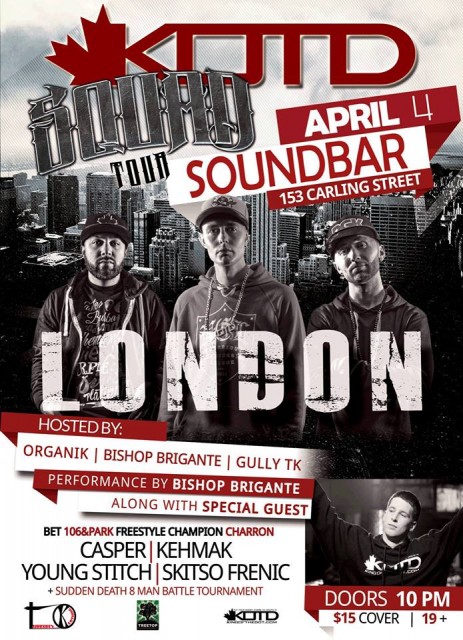 Yesterday, King of the Dot kicked off their tour around Ontario starting in Sudbury, heading out to Thunder Bay tonight. This is one huge event reaching cities across Ontario. April 4th, they make their way to London at The Soundbar. In co-ordination with Treetop Entertainment, the KOTD Squad Tour hits London this upcoming Friday and it’s seeming to already be one of the biggest events of the year, and it hasn’t event begun yet! Hosted by Organik, Gully TK and Bishop Brigante as well as BET 106 & Park Freestyle Friday Champion Cory Charron. This event will include performances by Bishop Brigante, supporting acts such as London’s own Casper and Kehmak from Treetop Entertainment, Young Stitch and Skitso Frenic. There will also be a sudden death, 8 man battle tournament. Tickets are still available though they are almost sold out, so I wouldn’t hesitate on missing one of the biggest events of the year so far here in London. Tickets range from $15 for regular admission and $25 for V.I.P.

If you’re a fan of KOTD (which if you’re a hip-hop fan, you should be) than come out to the Soundbar on April 4th for a legendary night!

What: King of the Dot Squad Tour: London
Where: 153 Carling Street at The Soundbar
When: Friday, April 4th, 2014
Admission: $15 regular admission, $25 V.I.P admission (Tickets available at Urban Image, Threadly Clothing as well as through promoters on the event page)

You can RSVP here and let us know how excited you are that KOTD is coming to London.