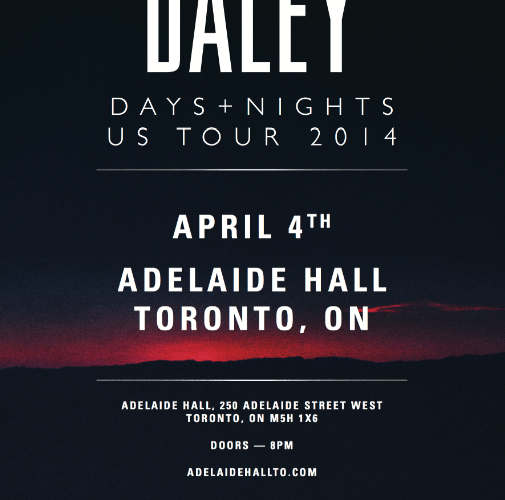 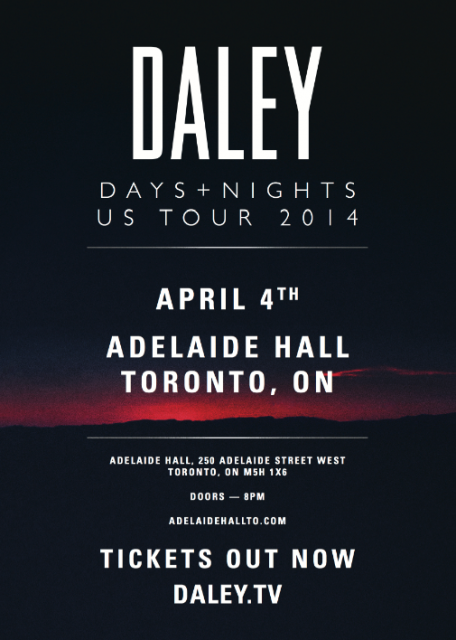 British singer-songwriter, Daley will be performing live inside of Toronto’s Adelaiade Hall on Friday, April 4, 2014. The Manchester native begain his musical career like most; as an independent artist in the industry. His big breakthrough came in 2010 when he became the guest vocalist for the Gorillaz on their top forty chart hit, “Doncamatic.” After gaining recognition in the industry, Daley signed a record deal with both, Univeral Republic Records and Polydor. Since 2010, Daley has managed to release four EP’s, including his debut album, Days & Nights; released back in February 2014. Now, fans will have a chance to catch him live in concert. Check out the full details below.

*The Come Up Show is giving away one pair of tickets to see Daley on April 4th at Adelaide Hall in Toronto! The contest starts today (Tuesday, April 2nd) and ends Wednesday, April 3rd at 2:00PM ET. All you have to do to win is follow us on Twitter (@thecomeupshow) and then copy, paste, and fill in the blank for the following:

Make sure to include the hashtag #TCUSDaley so we can properly choose a winner. Once chosen, the winner must provide contact information such as their name and e-mail address for confirmation. Entrants must be 19+. Good luck!