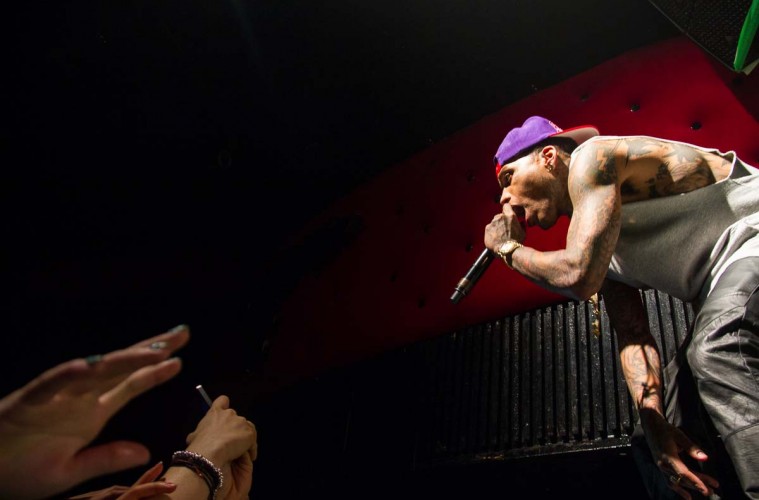 When Baltimore, Los Angeles and Miami roll their way into Toronto you can expect a night of great music filled with great vibes, eager fans and a mass amount of dancing. Kid Ink brought his “My Own Lane” tour to Toronto on Thursday, May 1st, 2014 with friends King Los and Bizzy Crook as one of the finals stops on his 2014 North American tour. Fans lined up around the building at 410 Sherbourne Street as they waited to enter the venue for the nights sold out show.

The time read 7:00pm as doors opened at The Phoenix Concert Theatre and was quickly filled with fans as they set themselves up in their designated areas. The lights in the theater were dark with a dim of hell red that reflected well as the stage was the only well-lit section giving fans a great view of the performers. The DJ warmed up the audience with club anthems and the best of hip hop before welcoming 305’s own Bizzy Crook to the stage. As he took the stage vibrant cheers and hollers welcomed him. Bizzy began to yell into the microphone as he tries to get fans riled up “Toronto whose ready to party!” His rather short set began with turn up tracks “Bands In A Depression” before he performed his remix of “Paranoid” before closing his set with “No Limit.”

The excitement in the audience continued to grow as the DJ played some more hip hop as fans refreshed themselves before the next set. As per usual the lights were dimmed before King Los appeared on the stage. He began his set with a quick freestyle about what’s to come that night before performing hits from his “Becoming King” and “Zero Gravity 2” mixtapes including “Weak” and “Woke Up Like This.” The next part of his set was one that was unexpected as he pulled two girls from the audience on stage to dance while he did a remix to the infamous French Montana song “Pop That.” Fans seemed well engaged as the performances showcased Los’s adoration for his fans. Upon finishing his set Los exits the stage and joins the audience for some snapshots and autographs.

Time was not wasted as Kid Ink walked across the stage, shaking hands with as many fans before doing a quick introduction to begin his set. King Los and Bizzy Crook definitely set the tone as fans roared while the LA rapper played an array of music from his “My Own Lane” album and even brought out Last Kings signee Honey Cocaine to help perform Dizzy Wright’s “Fashion.” Crowd favourites were obvious as “Tattoo of My Name,” “Money and Power,” and “Main Chick,” had the whole front portion of the theatre rushing into each other and simultaneously jumping up and down right until their very last notes. Throughout his set Kid Ink’s enthusiasm and passion for his music became more apparent. The energy from each and every performer was just as engaging as the one prior. With a microphone in one hand and a sharpie in another and with the first few notes of “Show Me” being played by the DJ, the self-proclaimed LA Rockstar began to sign autographs during the encore of the song before swiftly walking off stage right.

The night was one that all fans seemed to have enjoyed. Everything from the sound, choice of music right to lighting fit perfectly with the atmosphere. Kid Ink, King Los and Bizzy Crook all engaged with the audience and showcased what we can assume as their best as all three’s performances were well done. Fans exited the venue while the DJ continued to play hip hop anthems. With only three more shows until Kid Ink wraps up his North American leg of the tour fans definitely paid their dollars’ worth and seemed very well pleased with the performances they witnessed that night.