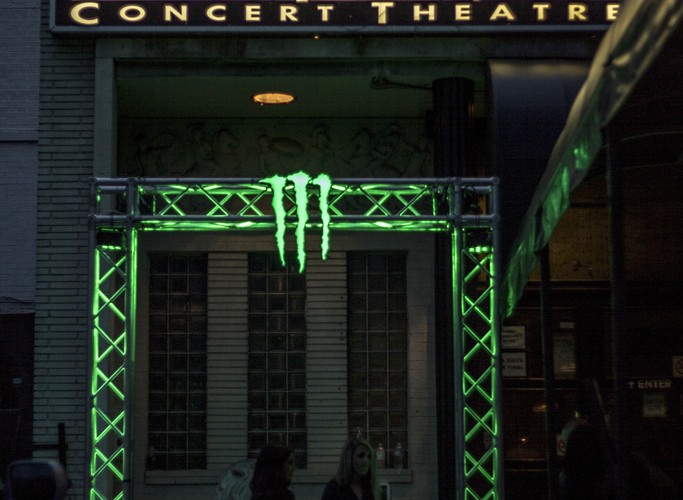 Throughout the past week, Canada hosted their annual Canadian Music Week festival which featured numerous of artists at an array of locations in downtown Toronto. Hailing from Brooklyn, New York Flatbush Zombies headlined their own show alongside Bodega Bamz this past Friday, May 9th, 2014 at what seemed to be their largest venue in Toronto thus far.

As doors opened to the Phoenix Concert Theater the handful of fans that came out to show their support headed straight to the bars and all around the spacious venue. It was obvious that the turnout was not what was expected for the night as the DJ tried to keep the mood light with a mix of hip-hop and rap delight. The lighting in the room was dark with green headlights that were positioned correctly around the room that lead eyes to a massive ‘M’ Monster logo in the front doorway. The venue which was almost eerie to some was very calm as fans awaited for their zombie threesome to hit the stage.

Time was not a factor for 905’s own Kaydee, as he walked onto the stage rocking a kangaroo sweatshirt and a bucket hat. The energy throughout his performance was immaculate as audience members swayed and rocked along with the local rapper. His set introduced the audience to the rappers east coast sound similar to Flatbush. He continued to show love to the city all while playing selected hits from his 90’s baby mixtape. The highlight of his performance definitely came when he tore off his sweatshirt to reveal a play on the infamous King, Notorious B.I.G’s photograph that was replaced with the city’s mayor, Rob Ford. It was nice to see the support Toronto gave to their own and with that he closed his set with a sentimental tribute to an ex coach of his that he saw as a great mentor.

Before fans could get restless, the next act Bodega Bamz quickly took the stage. With his Tanboys and Hispanic influence on his music he kept fans entertained from the beginning to the end. Just like Kaydee, Bodega’s music featured tons of samples from hip-hop greats including Big L and Tupac which became most apparent during his performance of “Glorious.” The Tanboys were definitely an asset during his set as they walked back and forth on the stage representing their heritage with a large Puerto Rican and Dominican flag.

The night was not over though as Zombie Juice stepped onto the stage with a large flash of light facing down on him as he opened up the set with “Minephuck” before being joined by his counterparts. One rocking a Dion Phaneuf Maple Leafs jersey and the other a Blue Jays jacket Meechy Darko and Erick Arc Elliott took the stage alongside Juice to get the night officially started. Their set included songs from their D.R.U.G.S. and Better off Dead mixtapes  including “Death,” “Thug Waffles” and “Amerikkkan Pie.” But, it was their performances to “MRAZ” and “Bliss” that really kept the audience morale high. However it was after these performances that the energy not only from the Zombies but also the fans in the building slowly began to disintegrate as the night progressed.

Overall the performances by the zombie threesome lacked the energy that fans expected. The show might not have sold the amount of tickets that they expected but every show should be performed to the best of their potential. Zombie Juice held down the group while Bodega Bamz brought the energy that night. Flatbush Zombies are one group that are quickly rising and gaining success in the hip hop community.  We definitely hope that this concert was just an off night for the group. If you were at the concert let us know what your thoughts from their performances were and what your favourite performance from the night was.

Review written by: Hayatt Baanks for The Come Up Show.

Photography by: Tiffany Komon for The Come Up Show.