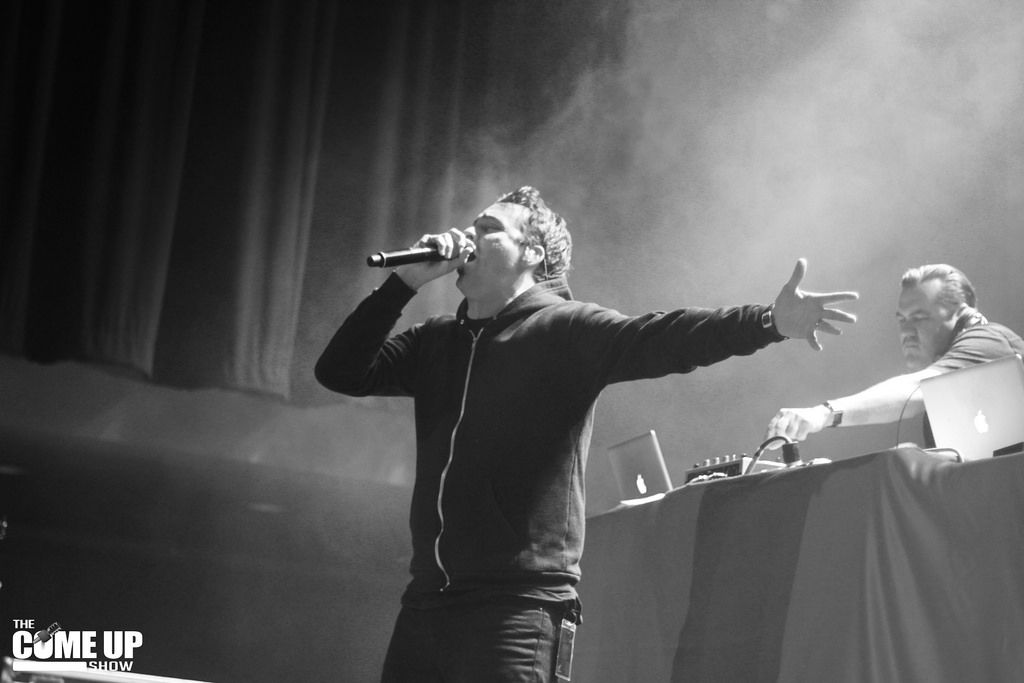 Minneapolis hip-hop group, Atmosphere; since being formed in 1989 has ever gained more and more of a loyal following since their first release back in 1997, Overcast! If you ask around amongst die hard hip-hop fans, their following is loyal and could most likely recite a song or two for you off the top of their head. As part of their Canadian tour, starting on the west coast, hitting London, Ontario, as one of their last few stops before heading south of the border. On May 29, Atmosphere took the stage in London along with Prof and Dem Atlas. Early arrivers were witness to a crazy line up outside of London Music Hall, varied from fans in their older years, to newly gained younger fans. Atmosphere has always been a prominent group in hip-hop. Their content, not as “cliche” as most hip-hop music nowadays. Touching on controversial, conscious topics along with every day life we as a people all encounter.

With a sold out house, Prof was the first to take the stage. We all know opening a show isn’t easy, especially when a crowd is one sided; only there to see the main act. This wasn’t the case for Prof, as those came in from outside, mingling amongst friends, Prof showed that the power of hip-hop music can captivate any crowd. Those who weren’t as a custom to his music, quickly became fans and those who knew his music, rocked out with him. There was a wave of people all over the place, though by the end, everyone was peering at the stage, ready and excited as ever to continue the night.

Dem Atlas, a fellow Rhymesayers Entertainment emcee took the stage second. With the crowd already lit up, packed from the front to the back, along the top tier of the venue, Dem Atlas showed incredible skills being able to work the crowd. Especially north of the border, I find sometimes with opening acts, it’s harder to get everyone to react, though as Dem Atlas went through various songs, you could visibly witness the energy in the building hit the next level. As my first, among many others first time taking in Dem Atlas perform, as he left the stage you could tell that the people at London Music Hall were eager for his next arrival.

As everyone rushed for their smoke breaks, grabbing their drinks and chatting about the previous performers. Expectations of songs that Atmosphere would perform began to come out in conversation amongst the crowds of people. After talking to a ton of people, I came to the conclusion it was a fifty, fifty ratio of people who had seen Atmosphere perform before, and those who had not. As the lights dimmed, Slug and Ant took the stage greeting the crowd, as screams overflowed the building. Me personally, I’ve never seen Atmosphere perform so I knew I was in for a treat. With their Southsiders album fresh out, Atmosphere took to go through a slew of tracks from there, though it was only right they took it back and performed from previous albums. After over an hour on stage, there was no sign of anything slowing down just yet. Having the fans repeat the hooks and sing along, Slug took to say some final words that really stuck with me. “I just want to thank you all for allowing us to make the music we do and tour the world, with such reliable and die hard fans, thank you”.

Atmosphere may not make music that is “popular” per say of the times right now, though they will always be relevant as long as they continue to do so. It is a much needed void on today’s hip-hop culture. If you do the research, they’re hip-hop icons in today’s day and age. Not one person left the building unsatified, along the streets afterwards the groups of people headed home were chatting about how amazing the show was. Which leaves only one question, when are they going to come back? The North Of Hell Tour was a complete success all across Canada from the visuals I saw through social media. Having the chance to catch them in London, Ontario definitely made for a special evening not only for myself, but the other two thousand people in attendance.