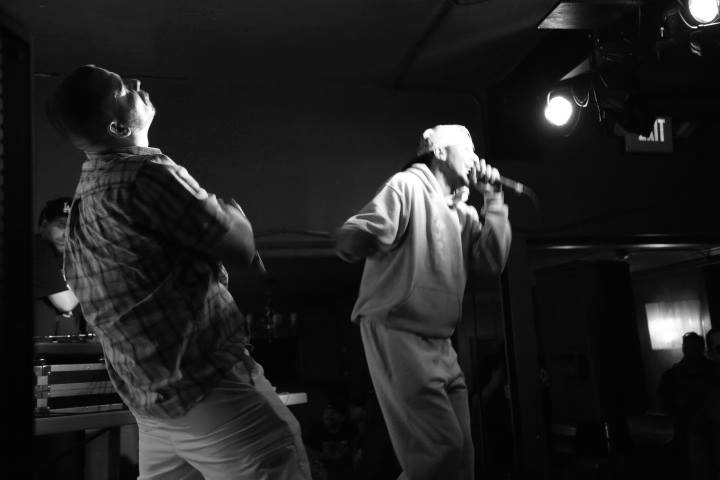 [Feature] The London Rap Night aka Dirty Thursday’s is back!

London, Ontario has always been a hotbed for Hip-Hop. The local community is always buzzing with competitive breakdancers, versatile DJ’s, masterful graffiti artists, as well as a large number of talented MC’s. As has been common in other regions, artists have diversified due to creative differences. Thus, London has never before been able to bring all of it’s elements into a collective sum. The London Rap Night aka Dirty Thursday’s is looking to end that. Organized by local Hip-Hop advocates; MC Moore, DJ Hullewood, and Tyler Hetherington of The Consignment Show. The London Rap Night is held biweekly; Thursday’s at The APK.

I had the chance to speak with MC Moore prior to the launch event in order to understand exactly why London’s hip-hop community needs this. He spoke of the London scene as being in a space of unity “it’s never been before”. Moore has a long-standing affiliation with the on, and off, organization of various rap nights, although still stressed about the importance of a willing demographic. “Tyler, and Hullewood, actually.. lots of people are asking how they can help.. Everyone’s down and wants to see it happen.”

Former rap nights (A.K.A. Dirty Thursday) have seen venues such as The Richmond Tavern, The Wick, The Ceeps, Moon Over Marin, Scott’s Corner, and Big League Comedy Club. It has played a background in developing artists and building relationships across the city. Many of today’s local stars such as Del Reze (Streetscape), Kehmak & Casper The Ghost (TreeTop), Sirreal, DJ Hullewood & Ngajuana sharpened their performances during these shows.

With many of the local heads knowing and supporting the infamous rap night for years prior, I asked Moore how he felt about the scene’s talent in comparison to the past. “The talent is there now” he declared, “to the point we should be having label scouts coming out”. Moore specifically spoke of local artist Sirreal’s vast improvement from an amateur, to a professional entertainer as an example of London’s growing talent. Moore continued on to say to aspiring artists “You need these rap nights, you need to be on stage 40 times to know what you’re doing.” His hopes are to see artists coming from out of town, like Lady ASG who is expected to make an appearance on the mic from Hamilton on the 26th. Looking forward Moore’s hopes are to showcase everything from “Battles, DJ battles, b-boys, and most importantly the new cats. I want to see the new generation coming up, and seeing where we’re at with it”. The hopes are high, and intentions true for the success of London’s new Rap Night at The APK, but it has the full support of our surrounding culture.

The debut night was a huge success! The APK was packed with people and beer specials. Before the night was over we saw local rappers X Verses + Boo tear the stage up. Afterwards Casper + Kehmak made their triumphant return to The London Rap Night, and performed some crowd favorites. Young Prince hit the stage next with his team and dropped some heavy tracks with DRell (A.K.A. Drug-Related). From St. Thomas we had Lyrical Mind return to rock his hometown crowd, and by chance a crew from his high-school went on right after. The Typewriters as always, brought their great sound out in support of something that they say helped shape their lives. Kid Notti made a surprise appearance with Young Breeze from Cambridge to kill his performance before longtime locals Megaphone + Lionize Prime blessed the stage. The crowd reached it’s peak as MC Moore himself, and longtime partner Exit Only went up for the best performance of the night. Sirreal and Ender-One then played a great set to a crowd that had already begun to disperse from the evening.

Everyone left satisfied, and anticipating the next event. Lots of artists are looking to perform at these upcoming events, which guarantees a wide diversity of talent to all party-goers. Set to return to The APK this Thursday and every other Thursday, The London Rap night is somewhere you should be.

Article by Bill Beamin.
Photos by Half Mickey aka #AskMick.