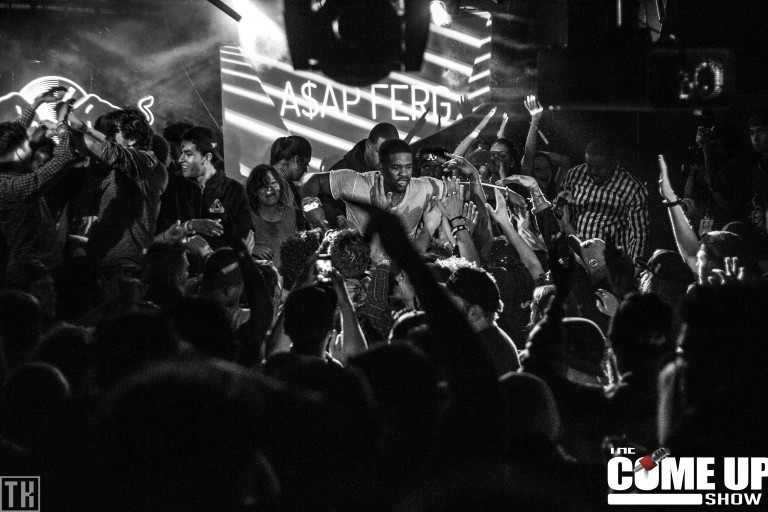 Red Bull Sound Select Presents: Toronto is a monthly showcase that features live music, drawing attention to some of the city’s most intriguing artists. Continuing their series in conjunction with North By Northeast, Red Bull hosted NXNE Friday on June 20, 2014 at Tattoo in Toronto’s downtown core. The event featured The Posterz, Shi Wisdom, A$AP Twelvvy, and headliner, A$AP Ferg.

Montreal rap trio, The Posterz were the opening act of the night. The group describes themselves as “Something unexpected, from a city you never expected.” This was especially true as they jumped into songs from their debut project, Starships & Dark Tints EP. While there weren’t many in attendance at this time, The Posterz remained optimistic throughout their performance, engaging with the crowd as they gave away a prize pack to a lucky (and twerking) contestant.

Toronto’s very own Shi Wisdom was next to take the stage as the songstress wowed the crowd with her vocal ability. Sporting white sunglasses with a matching tank top that read “Can’t We All Just Get A Bong,” Shi Wisdom showed beyond doubt why she’s considered as one of the city’s best talents. Joined by two backup singers, the trio performed a handful of songs including the fan favorite “Take The L,” as Shi lit a lighter, illuminating the stage.

Berekely, CA native 100’s was initially scheduled to perform, however, due to unforeseen circumstances he wasn’t able to attend. While many fans were disappointed with the news, A$AP Twelvvy took advantage of the situation by performing his very own set. As concertgoers welcomed Twelvvy’s presence, he wasted no time, performing a fast-paced, highly energetic set. As things came to an end, A$AP Twelvvy concluded with “Y.N.R.E” and “Hella Hoes.”

Following in his A$AP Mob affiliate footsteps, headliner A$AP Ferg rushed the stage in front of a packed house at Tattoo. As his gold grillz lit the dark atmosphere, Ferg peformed with high intensity as fans mimicked the rapper by forming mosh pits similar to a heavy-metal concert. Ferg then performed the bass-heavy “Hella Hoes” as well as hits off his latest LP, Trap Lord including “Let It Go”, “Work”, and “Dump Dump.” Ferg also gave an audience member the opportunity to come on stage and rap — the audience responded rather well as the unknown artist performed his own rendition of “OG Bobby Johnson.”

Before finishing his set, A$AP Ferg thanked Toronto and those in attendance for making the night a memorable one. As he walked off stage, it was evident the crowd wanted more — chanting “encore,” Ferg returned one last time to perform his standout track “Shabba” as he exited backstage. It was at this time when fans rushed the stage and began dancing wildly as music played in the background.

To conclude the night, late night special guest Evian Christ took the stage and performed a DJ set, showcasing his hip-hop routine in front of many. This was a great way to cap off what was already an exciting night.

Check out the full photo gallery on the slideshow below and let us know what you thought about the show!