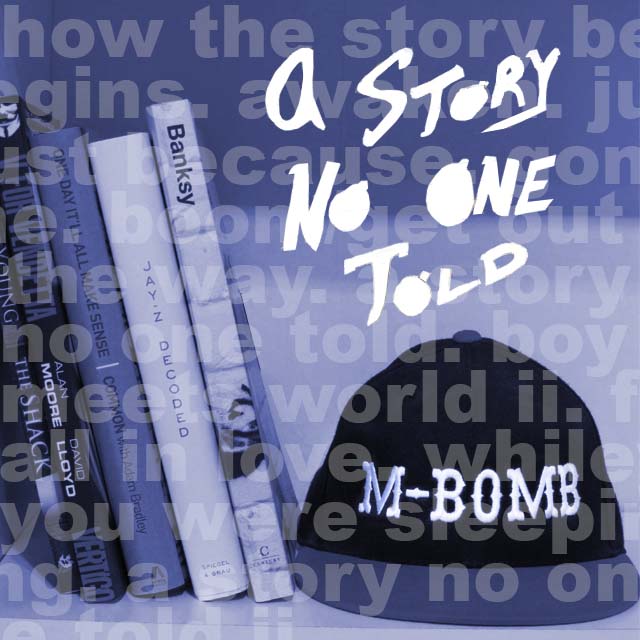 WORLD PREMIERE!!! We’re very proud to present a project by one of our own today, as the good homie M-Bomb drops his latest mixtape, A Story No One Told. The Waterloo emcee calls this his “most personal release to date,” and appropriately for such an introspective project, the mixtape is mostly feature-free, with the exception of a guest verse by emcee/producer A-Fos (who also mixed the project) on “Boom/Get Out The Way.”

Production-wise, M-Bomb does double-duty on “How The Story Begins” and “While You Were Sleeping,” with the remainder of the mixtape sampling from a number of the “most influential producers and artists” in his lifetime: classics from DJ Premier, Kanye West, Just Blaze, Exile, and Nottz Raw are all there.

Along with the release, M-Bomb has teamed up with a number of talented visual artist friends to create one-of-a-kind pieces of art for each song. The ten canvas pieces will be auctioned off next Saturday at his mixtape release party, with all proceeds going to UNITY Charity.

Stream/download the mixtape below, and read what M-Bomb had to say about the project:

“A Story No One Told is a 10-track narrative originally inspired by Shad’s song of the same name and the idea that the greatest story never told is our own. When asked about our lives and accomplishments, we’re often quick to downplay our experiences as commonplace and nothing special, but the truth is, within each of us lies an incredible story waiting to be told. With this release, my aim is to tell my story, in the hope of inspiring others to take notice of their own.” – M-Bomb