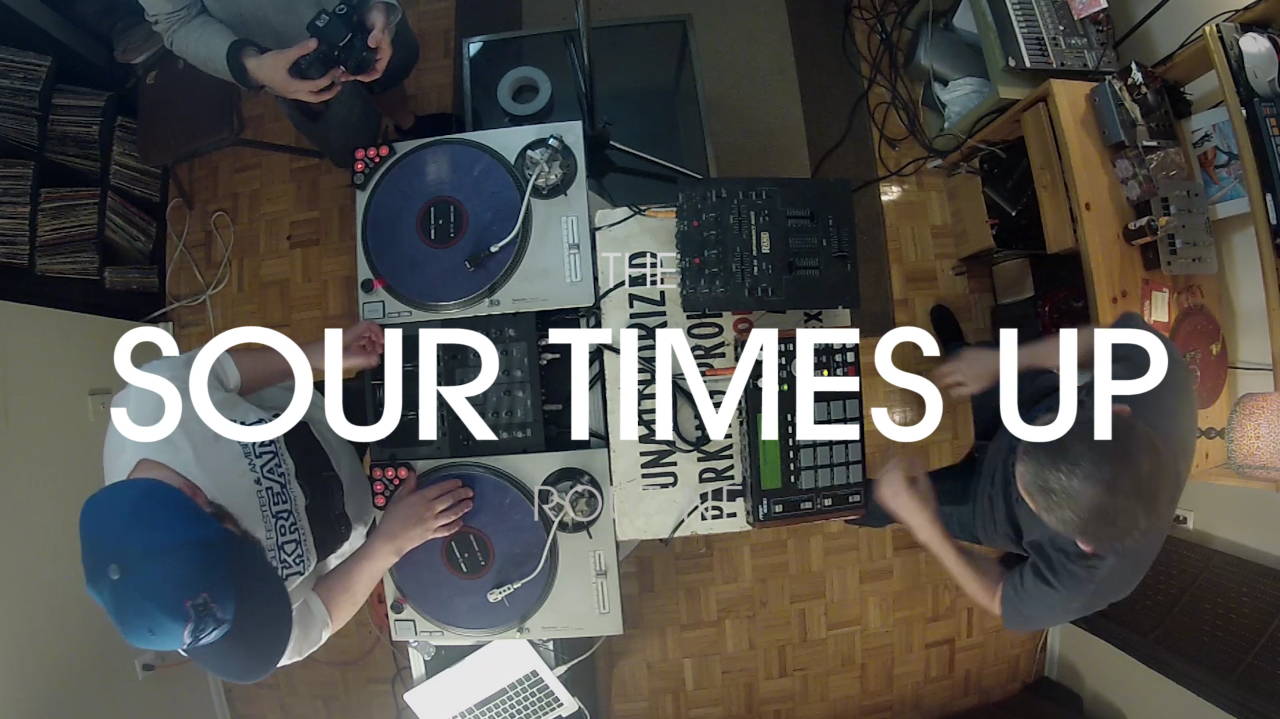 HEAT! Fresh Kils and Uncle Fester (together known as The Extremities) are back at it again with another routine, this time blending Portishead’s “Strangers” and “Sour Times” with O.C.’s “Time’s Up” to create “Sour Times Up” — not just a clever name-twist but a dope combination from two unexpected corners of the music world. Even better, the guys were kind enough to give us the honours of premiering it. The routine comes as the Toronto/Halifax duo prepare to embark on a U.S. tour to promote their new album, Instruments. Check out the routine below and read the mini-interview after.

TCUS: How long did it take to practise this routine?

Fresh Kils: It actually came together fairly quickly, because we had the elements [together]. I had already chopped up “Strangers,” and I had that prepped. It probably took a total of maybe four or five hours to basically compose and practise. The thing about it is, it’s stuff I’m doing all the time and stuff Fester is doing all the time, so we’re very [well-rehearsed]. We know each other; we’re doing that type of stuff quite a lot, so they tend to come together fairly quickly. I know when I started doing routines, it took a lot longer – like, the Transformer routine took me the better part of a week almost.

TCUS: When it comes to a dual routine with you and Uncle Fester, who comes up with the ideas for these?

Fresh Kils: We both have come to the table with ideas. I think part of the whole routine idea thing too – and it’s not a great reason to do anything – but we’ve been trying to think of pairings that make sense in terms of even having good names. I was doing the Portishead thing and we just looked for acapellas, and the O.C. acapella seemed to work so we were like “cool, ‘Sour Times Up.’ Let’s go for it.” We’ll toss things around, and if there’s any good reason to go with something – like a stupid name that we can come up with – then we’ll go with it.

But with the routines we’ve been doing together, it’s stuff that either I had worked on before and then Fester would work in elements, or [it’s] the opposite. There’s a Rihanna routine that Fester [has practised] from deejaying, and there’s a couple songs he likes to mash together that really work together, so we found an acapella. We both come up with the ideas.

What we’re trying to do with the new routines is [make it a little different]. Usually, I’m leading. I’m playing the beat, and he’s doing stuff overtop of it. But we’ve tried to change that a little bit and make sure that it isn’t all just Fes on top of me – which is dope; it still works, but it’s better when we break everything up and down. It’s about us building around each other more, as opposed to a Fresh Kils-centric [routine].

TCUS: Those Fresh Kils-centric routines are what you started with. Now you’re getting Fester involved a lot more. What prompted that decision?

Fresh Kils: The original routines were battle routines that I was doing because I was battling [in competitions]. That’s why they’re built like battle routines: they’re short, they have a narrative, they’re funny, [and] they have intros and outros. But as The Extremities, Fes and I have been performing together for a long time. To be honest, it’s long overdue. We’ve been touring as The Extremities for years now, and when we started doing that stuff, we’d tour with a sax player, singers, keyboard players, bass players… we’d do a full-band thing. It was just time. We had this Instruments record come out, and we figured it would be cool to promo that record with some routines that were really as much about us.

Fes has been a collaborator throughout – even when I was doing the battles, he was helping me co-produce some of that stuff. He was helping me with cuts, and he recorded the “movie voice” guy saying [a bunch of stuff for me]. He works with the “movie voice” guy at CBC, and I sent him a list of all the other producers’ names for this guy to say. I also sent him some of the Ghostface Blog – you know, “Top 10 Softest Rappers in the Game.” So I sent him a list of all the other producers that I was battling and then just a list of insults from the Ghostface Blog [laughs]. Fes was recording them and cutting them up for me, and you get the “movie voice” guy saying stuff like “I bet he closes his eyes when he brushes his teeth” – you know, all this stupid stuff.

So Fes has always been there, and it was just time to get together on the video tip – because it’s been so successful and really helpful to me in terms of getting booking and everything else. It just made sense with a record coming out that we’d do it together – it’s long overdue.

TCUS: How many more videos do you have in the works?

Fresh Kils: There’s actually a whole bunch of them, but we’re trying to roll them out slowly – and we’re trying to make sure that we stay consistent. There’s like six or seven of them: “Adeltron” was the first one, “Check Your Led” was the second one, and this’ll be the third one. We’re on tour as of September 16th in the States – we’re doing about five weeks – so we’re trying to keep releasing stuff consistently so that there’s a constant, steady stream of stuff coming out that’s helping the record and helping promo touring and everything else.

There’s a couple of really cool ones left. One of them is a really, really cool collaboration with an emcee I won’t name right now, but it’s a really cool flip we did live with an emcee. That’s kind of [the direction] we’re going; the inclusion of Fester is part of it, but we’re keeping moving. We’re going to keep integrating other things and doing cooler stuff. I think to some degree, everyone has sort of seen the MPC stuff. There’s more of a precedent now for it than there has been, and it’s [still] fun, but touring with our sax player and singer Maya Killtron… the stuff we were doing on stage was crazy.

As much as I can do on my own, it’s exciting to keep pulling other elements in and making it work. As long as we’re making musical decisions and not just, “hey, wouldn’t it be great if we had a didgeridoo player or something?” So we’ve got other ones in the works that involve other musicians and stuff. That’s where we’re going.