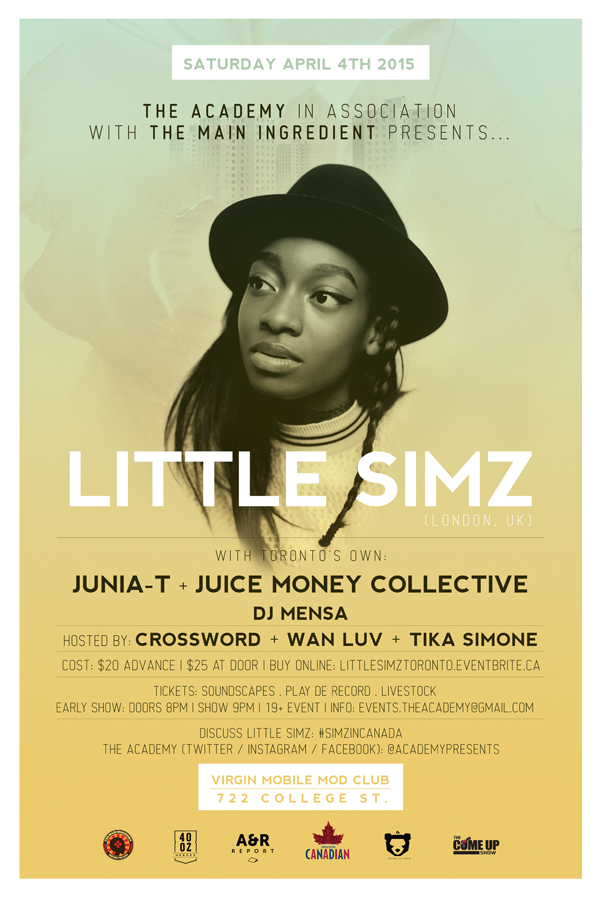 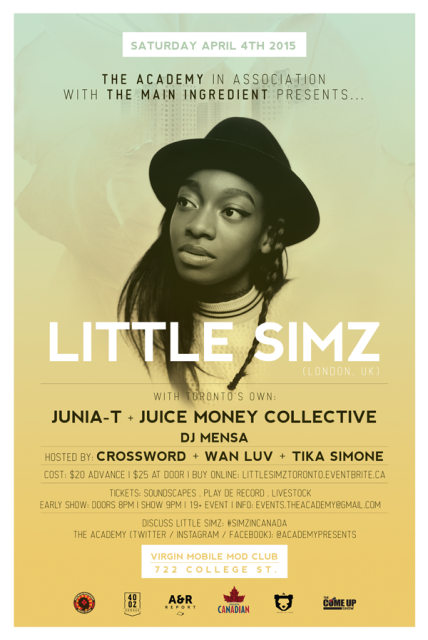 The momentum is building for LITTLE SIMZ and this is your opportunity to catch her live because this time next year you’ll be paying double the price to see her. Don’t sleep Toronto!

Little Simz may have just turned US legal age earlier this calendar year, but that hasn’t prevented American hip hop heavyweights from taking notice. From having a mixtape premiere on Jay Z’s Life + Times outlet, to receiving cosigns from Andre 3000, Snoop Dogg, J. Cole and Kendrick Lamar, she has already made waves across the pond. In fact, her Canadian debut came last May at the Canadian Music Week festival, when the Brit upstart quickly won crowds over with her prominent presence and definitive delivery.

On Saturday, April 4th, 2015, Toronto fans will have the opportunity to witness a marquee performance by the hardworking Simz, now a year older and three projects deeper under her belt – the E.D.G.E. EP (June 2014), and volumes 2 and 3|000 in her AGE 101: DROP mini-EP series. Even the small sample size of 2015 has been eventful for the rapper from Islington, North London. She’s followed up her award winning 2014 (Best New Artist at the Gilles Peterson Worldwide Awards, plus two nominations at the MOBO Awards) with a hype garnering music video (“Intervention” – 75,000 views since February 5th) and an appearance on BBC Radio 1’s Piano Sessions. Did we mention Zane Lowe is a fan?

Earlier this year, Little Simz held the unique distinction of being a featured artist as part of the exclusive Launched at Red Bull Studios television series. The tastemaker music programme hosted by Annie Mac showcased 10 artists expected to make a big impact over the coming year, tipped off by Red Bull Studios, UK’s Channel 4 network, and 10 established acts.

Little Simz will be joined on stage by Toronto’s own Junia-T, a collaborator on Simz’ AGE 101: DROP 2 EP. After the party there’s two after-parties, one for the trap-heads at the Virgin Mobile MOD Club and another for the soul listeners at Studio Bar near Dundas and Bathurst.