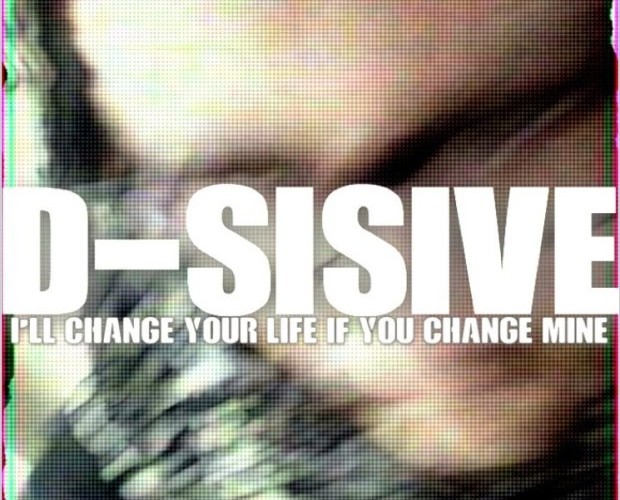 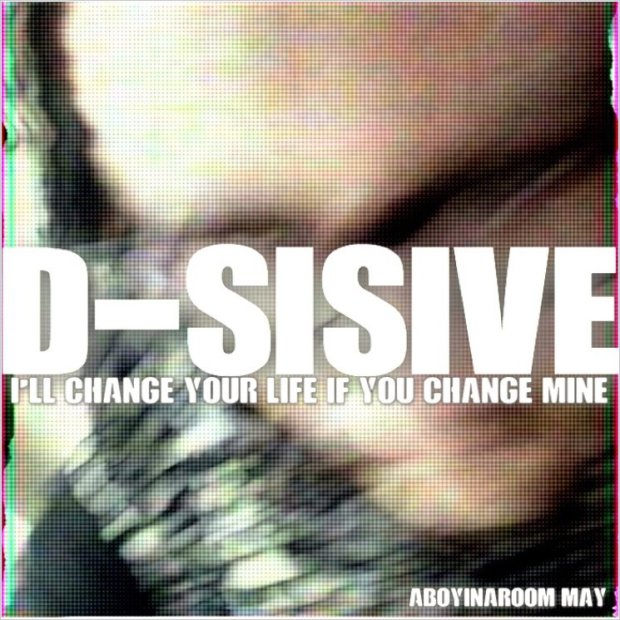 Derek Christoff AKA D-Sisive, the Canadian rapper hailing from Toronto, Ontario hits us with a collection of tracks under the title “I’ll Change Your Life If You Change Mine“. Best known for his Juno-nominated EP “The Book“, D-Sisive shows us an 11 track album featuring a few songs that have been previously released such as “Fat Cage”, “6 Inch God”, and “Violent J”, as well as a ton of new cuts that are sure to have any D-Sisive fan jumping for joy. It is also worth noting that the digital release seems to be sub-titled “aboyinaroom may“.

The digital release starts out with a creepy intro in the form of a skit titled “I Hope I’m Gonna Be Ok“, where the artist asks himself just that, then ends it off stating that “2015 is going to be quite a ride”, setting the listener up for the adventure ahead. The second track entitled “The Scientology Samba” starts off smooth, and with the production and vocals gaining ground, the energy builds up before giving way to a groove type feel. “Lil’ Bow Wow” sports D-Sisive ripping apart a boom bap beat, throwing out bar after bar. If you’re a fan of straight rhymes, this is going to be the track for you. “Violent J” holds a dark overtone in regards to the production, and the vocals themselves, which appear to be fit the title quite well. “6 Inch God“, a hilarious take on Drake’s “6 God”, has Derek flowing smoothly over an undeniably classic instrumental as one of the stand out tracks on the album. “Gabagool” & “The Furious Funkster” have D-Sisive delivering his signature style, before “Fat Cage” comes around with Derek killing a quirky instrumental that just sounds so right. The second to last cut “Basquiat Don’t Breakdance” has to be one of my favorite cuts on the album, with the track only being 1:09, D-Sisive flows all over the beat with this head bopping track. The closing song is titled “Peter’s Tits [Lesbian Haircut (Win Butler)], and is quite fitting to close out the album, with its gentle almost optimistic feel. D-Sisive is gearing up for 2015 being quite a ride.

Derek Kristoff also gave us a couple statements about his digital album, which can be seen below. I was going to attempt to decipher what he’s written about his release, but ultimately decided that I did not want to potentially limit the message he’s trying to give here. I’ll leave the deciphering up to you guys, but make sure you let us know what you think it means in the comment section.

I didn’t know you. You didn’t know me. You would watch the big kids
play basketball. I hated sports, but knew there was something we had
in common. Just didn’t know what.

Everything changed the day I got Clancy. I was the only kid in the
neighborhood with a pet raccoon. Clancy lost a leg in the war. People
felt sorry for him, but not me. I preferred Clancy with 3 legs. Made
him unique. Missing his front|left leg gave him the ability to
somersault. You fell head over heels for my somersaulting, 3-legged
raccoon, then became my friend by default. You told your friends about
him. You even wrote about him in your school newspaper. Clancy was our
ham and cheese. I knew it. But when you’re me–you take what you can
get.

Eventually, you moved on. Found new friends. Friends who wear clean
clothes and shower twice a day. Friends who fish, take photos of their
meals and drive cars. Clancy learned to cartwheel. And backflip. And
tap dance. Clancy choreographed a routine to the Marianas Trench song
‘Here’s To The Zeros’ [such a great fucking song]. I invited everyone
in the neighborhood to watch Clancy perform his routine in the
schoolyard. Nobody showed. They were all busy watching their friends
shower.

Well, if you ever get tired of watching your new friends shower,
remember–I’m always in the schoolyard. With Clancy.