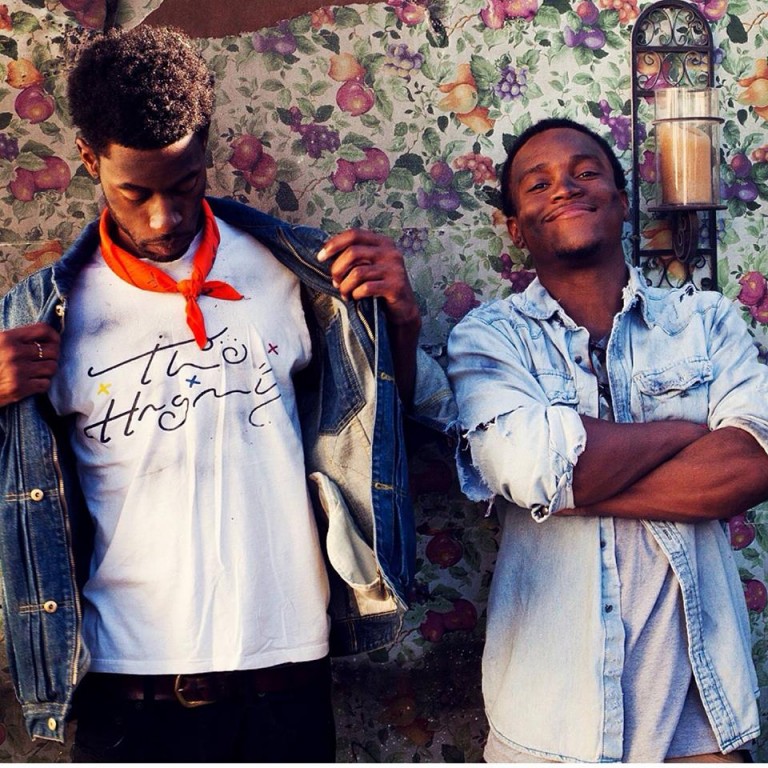 TiRon & Ayomari talk self-love, getting out of their comfort zone, and why they make music

As they’ll tell you, TiRon & Ayomari are tired of hearing the same old music. With their latest full-length effort, The Great New Wonderful, they offer an alternative — boasting that “happiness is guaranteed,” and then following through on that promise. “The best music has not been created already,” says Ayomari. “The human condition always changes,” adds TiRon, “so as the human condition changes, so should the message. Yeah, we want you to jam, but we’ve been jammin’ for a long time. Yeah, we want you to party, but we’ve been partying for a long time. There’s so many things going on within society that are little nuances that the music doesn’t reflect, and [we’re seeing] a disconnect [as a result].” TGNW is at-times uplifting, reassuring, dance-inducing, a call-to-action, and at all times, refreshingly different.

If you haven’t yet heard of the Los Angeles-based duo, now’s the time to get on board. After their superb A Sucker For Pumps release, followed by the strong offerings of HNGRY and The Wonderful Prelude series, they’ve made fans out of the likes of Q-Tip and Diddy and proven themselves as much more than a one-album success. More than being great artists, though, the two happen to be thoughtful and profound individuals with plenty to say. We caught up with TiRon & Ayomari to talk about the importance of self-love in the black community, getting out of their comfort zone, why they make music, and much more. Listen to the podcast above and read the highlights below.

On what messages are missing in music:

“One of the main messages that I think is missing in music – specifically black music – is self-love,” says TiRon. “There’s a lot of music that’s ‘you ain’t shit if you ain’t got this. If you ain’t f—kin’ this bad b—ch, you ain’t shit. All the broke n—as is this…’ There’s a lot of ‘in order for me to be dope, you gotta be wack.’ There’s nothing to make you feel proud of yourself … There’s only stuff to make you feel arrogant or cocky about yourself.”

“With this album, one thing we’ve tried to focus on writing-wise is not writing so much from the ‘I’ [perspective] – more so trying to write from the perspective of ‘we’,” says Ayomari. “We all go through things as individuals, and we want to get those stories out, but it gets to a point where we’re talking about ‘I’ so much that we begin to believe that we’re alone. It’s like you put yourself in this box to where you feel like the world is against you. For some reason, we’re sold this narrative that you have to be yourself, and being yourself means being yourself in spite of everybody else, even if it comes to harm.”

“And it’s weird that we have all of these moments in life where the people need to come together, but the music is not telling us to do that,” TiRon adds. “Where is that music for people? It’s very few and far between where you’ll find music that is inspiring people to get together. Most music is ‘f—k them over there, this is me over here,’ you know what I’m saying?”

On knowledge of self:

“If you don’t know yourself, it’s hard to love or even feel compassion for someone else, because you don’t humanize or connect with that [other perspective],” says TiRon. “When you know who you are, then you see yourself in everything, because you truly know that you are everything, and everything is you. We’re literally all made of the same star-stuff. These are just biological tricks that make us look different. When you know yourself, you become more compassionate, more aware, more focused – more in tune with what’s going on around you.”

“We’re so caught up in trying to ‘make it’ in life,” adds Ayomari. “We already made it; we’re here. We don’t have to do any more. We exist. We made it through the egg; we were born. But we’re still acting like we’re crawling on top of each other, and this is some kind of rat race.”

On getting out of their comfort zones:

“A lot of learning comes from getting out of your comfort zone,” says TiRon. “In order to learn anything, you have to be like, ‘you know what? I don’t know it, and that’s alright. I’m willing to fail in public and risk being laughed at in order to learn.’ You have to raise your hand and possibly be wrong.”

“I feel like that’s something you become discouraged about the older you get,” he adds, “because when you get older, you’re supposed to have it all figured out. No! Not at all! In the scheme of human civilization, we haven’t been here in the blink of an eye.”

“It’s so easy to fall into old habits,” says Ayomari. “My whole thing this past year has been trying to create new habits and just taking [it] one day at a time, and not being so down on myself when I’m not as good as I’d like to be. Being in the present is peace, because when you’re in the present, you always have the chance to change what can happen. If you’re thinking about the past, you’re thinking about regret – what happened, and how it might affect what’s going on right now, and what can happen. When you’re in the present, you always have the ability to make a change right then and there.”

On why they make music:

“What we do isn’t more important than why we do it,” says TiRon. “Musically, I think, for awhile, it was always about the what – like, how dope I am, you know? Let me write the coldest punchlines, let me get the dopest beats, the dopest album cover… the what was always the focal point. But it wasn’t until I figured out why [I make music] that albums started to have more of a meaning for me.”

“It’s not just for music; it’s for everything in life,” adds Ayomari. “Why you do something is the driving force behind why you’ll want to continue doing it. At a certain point, doing it for no reason – just for monetary gain, or likes, or to raise your popularity stock – that’s [no longer] going to be fulfilling to you.”

“The most important thing is bridging the gap – because I feel that everything is very segregated in a way,” TiRon says. “There’s a lot of, ‘this is my struggle, not your struggle,’ when really, we’re all millions of species on this planet, whose coexistence is reliant upon one other. Musically, it’s really opening a lot of those conversations and breaking down a lot of those barriers between people that feel like they don’t have anything in common.”

“In my opinion, [music is] the most powerful, and the easiest way to connect with someone whom you’ve never met – who didn’t come from the same background as you or from the same culture. It’s definitely a universal language,” says Ayomari. “Obviously, everyone can’t play an instrument, but scientifically and psychologically, there’s things we all react to musically.”

Watch the short film for The Great New Wonderful below: