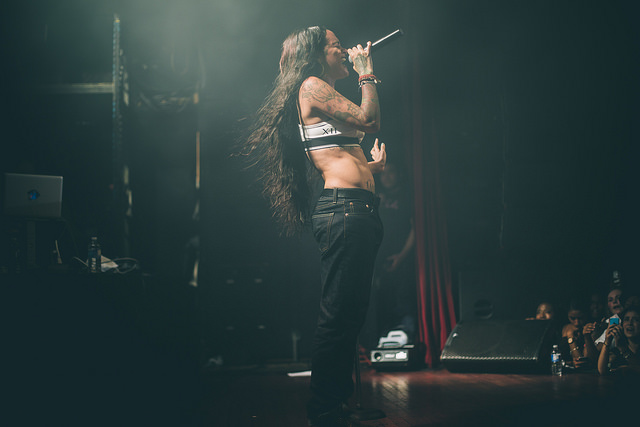 Oakland and the Bay area are experiencing a Hip Hop resurgence. Breakout artists like G-Eazy, HBK Gang, Main Attrakionz and Overdoz have helped bring back the spotlight. However there’s one artist thats not only breaking in Oakland but internationally. At 20 years old, R&B/Pop artist Kehlani is on her way to superstardom.

Her down to earth personality, compassion for her fans, and positive attitude have helped her push for that rare cult fan following. And trust me, four hours before the doors opened I witnessed a line up of at least one hundred die hard fans awaiting for the show and when Kehlani gave them a surprise visit, it was complete pandemonium. Shortly after, we got a chance to sit down and discuss the current state of the industry, how she keeps it one hundred and some of her favourite known artists from Oakland. Check out the interview below and make sure to also read our concert review of the You should be here tour at the Mod Club. 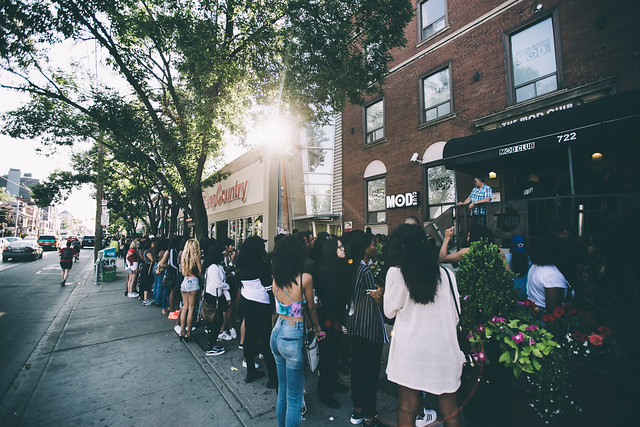 TCUS: In the industry you are now well known, but for a lot of people you are still a new artist, if you were to introduce yourself to those people how would you describe who Kehlani is?

Kehlani: My name is Kehlani I’m 20 years old I like long walks on the beach… I’m kidding. I’m Kehlani, I’m 20, I’m from Oakland, Which is obviously from America and California. I’m a tomboy, kind of spunky, I’m outspoken, and all I really do is make music. I don’t really do anything else in life, its kind of just my life and I don’t mean that in a corny way, its just all that I really do so yeah.

TCUS: What seems to be such a natural rise to fame can you pinpoint a few factors that have possibly helped you break into the mainstream?

Kehlani: Well I work hard. I guess its kind of my factor. I guess cause I came up of nowhere lowkey, in my eyes I didn’t because I’ve been a musician and performer since I was in eighth grade, you know, so that was moving around for years but like you said, to everyone I’m a new artist, so I really just been working -I put the ground work in I went and met everyone shook everyone’s hand, I smiled at everyone, it was genuine I never had a weird strategy, I had no strategy, I had no handout, I had no cosign, I didn’t have anything it was just me in the studio working and if people liked it they liked it and if they didn’t they didn’t that’s what helped me break but people liked it so yeah. 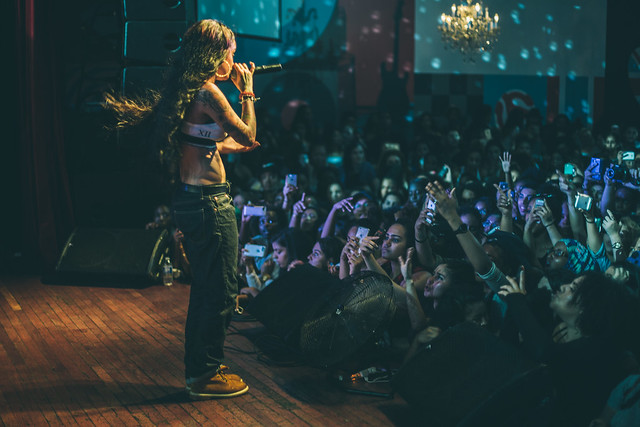 TCUS: What were the more challenging aspects of breaking?

Kehlani: People not understanding your vision, but putting an opinion to it before they understand it. I think people genuinely don’t get the message I’m trying to spread or don’t get what I’m out here trying to do but will judge the music while completely not understanding, at least when I don’t like something I’ll at least wrap my head around it first so I can understand why I don’t like it, you know what I’m saying, but in the end of the day everyone likes everything different what I like you may not like, what you like, I may not like so its entirely someone’s own opinions

TCUS: You are from Oakland and currently the Bay Area is being recognized for having an up and coming Hip Hop scene with artists like G-Eazy, IAMSU, Sage the Gemini. Do you have any personal favorite artists that aren’t as well known, is there any hidden gems?

Kehlani: Yeah of course, I mean its just funny that I’m kind of the only person that’s not doing the hip-hop stuff that’s really like getting the shine. I guess where so many people making really dope-like R&B, Neo Soul, like Soul music like there very much keeping that alive in the Bay Area. Like there’s just a heart and soul in the Bay area that reeks through the music even when it is hip hop, you know what I’m saying.

For example HBK Gang is the only hip hop group I know that’s never made a violent song or said anything remotely violent in any of their records. And that shit knocks, do you know what I’m saying. So its like they don’t have to do any of that and were from one of the hardest places ever and we don’t have to talk about none of that stuff its just positive. But as far as hidden gems Cali Mage is really tight. It’s a collective. Hot Head ENT. It’s a collective. I think theres a bunch of dope collective family type situations in the bay where they make a bunch of stuff. There’s a lot for sure.

TCUS: It’s obvious that were all addicted our phones these days and you address that in the song “Just a Picture” with Kyle and I want to ask how do you make sure you’re living in the moment and not taking things for granted?

Kehlani: God man, its God you know what I’m saying. You got to be like aware at all times. Like being really aware and really just understanding what you’re doing. I think there’ll be times where one of the girls gets an attitude and I’ll have to say sit everybody down. I’m like, yo this happened last night right. I was sitting everyone down I’m like one, were in another country, were blessed to be able to cross this border, and be in this other country. Two this country is nice as hell!

So we chillin’ in this nice ass country and y’all got an attitude. We are blessed to be in this nice ass country. Some people can’t even come over here, you know what I’m sayin’. Like we’re in a sprinter, were all alive, were all healthy, were all here together, like some people are at there cubical job right now making way less than us, and some people are across the world in a goddamn sweat shop making like nothing a day and were getting paid to sing and dance. That’s a blessing you know what I’m sayin’. So I have to remind everybody that all the time. I tell everyone too, that if I ever get in line you better keep me in check, cause I never not want to be connected to what I am now. Like think the way I think, I never want to be like that so I guess that’s just what I do. I keep God right here right with me and stay grounded.

TCUS: That was really my follow up question, with everything blowing up you are still incredibly humble and modest, how do you stay so grounded?

Kehlani: It’s really God keeping those people around me, coming up witnessing all these major artists I get into these situations all the time.  I watch it all the time. There’s these artists and they’re great and the people around them are just it’s pure self sabotage. They’ve got people where they go outside and I just gave this example today. It’s funny, it’s like a guy could be “Yo the sky is green bruh, and all his homies are like you right you the sky is green, G I swear to God the sky is so green I can’t even tell the difference between the sky and the grass” and I’m gonna sit there like yo y’all better tell me if the sky is blue and I say its green, because that’s a problem.

Yes men will be the ultimate kill. Because no one is going to tell you that you’re slipping. This is a game where you’re guaranteed to change. Whether that’s positive or negative your not going to go in and come out the same. Whatever it is you’re going to change,  you need to have people that will be able to let you know if its negative or positive and they can’t be yes men, for real, like its also a problem bringing yours friends into all of this. Because they’re either the good friends and keep real, real, real with you or they’ll gonna be like yo I want to stay around cause you gonna make bread and you gonna do this, and I don’t gotta do shit so I’m going to play it cool and not lose my job. I’ll lose this friendship, but you got to see through which ones to weed out and which ones to keep. 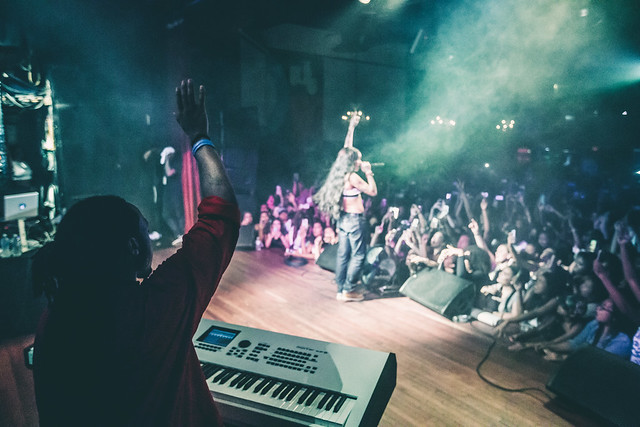 TCUS: We’re in awesome time right now where artists have more tools than ever to promote themselves, at the same time it’s also very over saturated, For up and coming artists how do you get people not just listen but to care about your music?

Kehlani: I’m just so old school and to the point I’m just like yo you better like this shit is tight you know what I’m sayin’ listened to it if you want to listen to it like the other day I deleted my twitter. I only came back because my label was yelling at me but if they wasn’t yelling at me I would not have no damn twitter. And everybody was like yo you deleted your twitter, while you were on tour, and you have to do the radio blah, blah, blah, and these interviews here and you got to do this twitter blah, blah, blah, you need that and I’m like no I don’t.

Like we search for that validation. Artists cannot tell me they don’t still look up their names. I don’t believe that shit, you know what I’m sayin’. I know you’re looking up your name I know you’re seeing every negative comment you’re favouriting little things, and I know it you know what I’m sayin’. So the way I get people to like my music is to put it out there and they like it. If I put the link and you click it and you like it that’s on you. I’m never going to shove it down your throat ever a day in my life.

Photography by: Ori Raynai
Interview by: Matthew McLellan
Check out the full review of Kehlani, Pell, and Pluto You Should Be Here tour at the Mod Club by Vanessa Francis and let us know what you think of the interview.