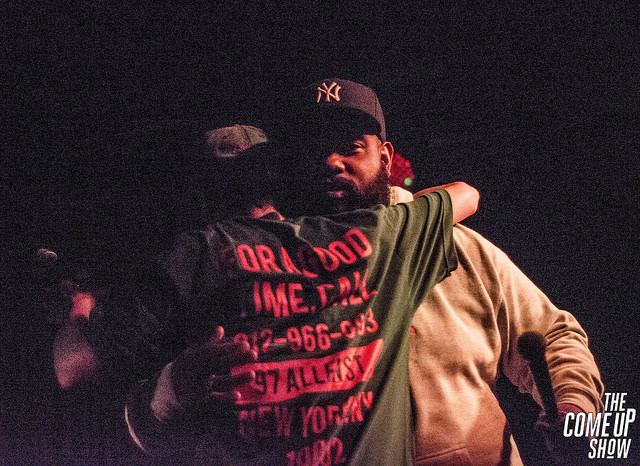 Last Thursday, Wiki and Antwon sold out the Drake Hotel and The Come Up Show caught up with the two artists before the show for a short chat.

We sat down at the bar while “Return of the Mack” provided the backdrop. Wiki and I ordered beers; Antwon opted for a cappuccino. Here’s how the conversation played out:

Matteo: Wiki and Antwon, welcome guys. You’re in the Six right now. How you feeling?

What about the 6 God? Do you have a favourite Drake joint?

Wiki: I don’t know them by the names. There’s that one off the album that was kind of tight. My bad, my bad aha. I forget the name of it, but I remember when I had sex with my girlfriend I used to put on the albums.

Antwon: My favourite Drake song would be “Club TT” by Robin Banks.

So, Phife Dawg died the other day. I was just wondering how he impacted you guys. Wiki, you’re from New York, so it probably hit your city the hardest.

Wiki: Yeah I grew up on Tribe. That’s one of the groups I came up listening to. I always fucked with Phife too, because he’s a little guy like me. It’s really sad, even though I knew he was sick. You know what I mean?

Antwon: It’s pretty lit, bruh. I got a little Anticon chain. I got the little house and everything, so you know.

And you got the cappuccino’s too.

I saw your Complex City Cypher – I loved it. Have you ever thought about pursuing more music with a live band accompaniment?

Wiki: Yeah, I think. I got some homies who play instruments, it’d be cool to like – I don’t want to overdo it – but you know, maybe have a little band or something. But down the line, I’m not worried about it right now.

Have you both ever thought doing a collaborative project at all? I loved your cuts off Lil Me.

Wiki: Yeah that shit will definitely happen, I think. Probably. We’re definitely going to keep working together, that’s off the top. But for a project, we haven’t really discussed it. It’s possible down the line. That’s probably the only person I’d do it with, really.

Antwon: We already have “collaboratives.”

Antwon: Like mad rappers wanna do rap songs and rap albums together, you know what I’m saying? But that’s it. It’s played out. We doing real shit, man. We hang out, man. We eat food together. We smoke weed together. We do real shit, that real people do. N*ggas out here just wanna, like, be the aesthetic. They’re really surface, you know what I mean?

Wiki: Yeah, yeah. Collaborative albums that are like fake.

Well that’s the interesting thing too, right. You guys are almost anti-hype; anti-establishment.

Do you think that’s one of your main drives? Or do you think you’re just doing you?

Wiki: Maybe at a certain time. I just do – as you said – just kind of do me. Do what makes me feel good. But I’m not going to stand out there and be anti-anything.

And it comes through in your music, too. I mean, you guys are not about the “image.”

Antwon: No because our f*cking image is fire, that’s why.

Wiki: The image is there, man.

Antwon: We already have the image. Niggas wanna build the image, man. You feel me?

Even with the teeth. I think it just adds to the image. It’s like you’re trying to spit through the teeth.

Wiki: I think I might need to get teeth done.

Antwon: You finna get teeth done?

Wiki: My mom would be mad.

Wiki: We switching up.

Antwon: We switching up on the maw f*ckas. These n*ggas think they got the formula, they already know the formula. We switch it up, man.

I wanna ask about the new “God Bless Me” remix. Did you guys record that on the road or before you left?

Antwon: Nah, I recorded that before we left. I was originally supposed to be on the Bless Me track, but some shit happened with the stems, and then shit got f*cked up. That’s okay though. We got the remix so I’m lit.

Wiki: He’s chill, he’s a very nice guy. He shows a lot of love; he’s really respectful. All those dudes are mad chill.

Do you know all of those guys in the BBK camp?

Wiki: Oh, I don’t know them all. But what I’m saying is most of all the people I’ve met, they’ll all be like: “Yooo.” [Grime rappers] in general, – I feel like they’re trying to do it in the US – so they don’t have much of the attitude as some rappers from the states.

Do you guys even get a chance to shower at all? 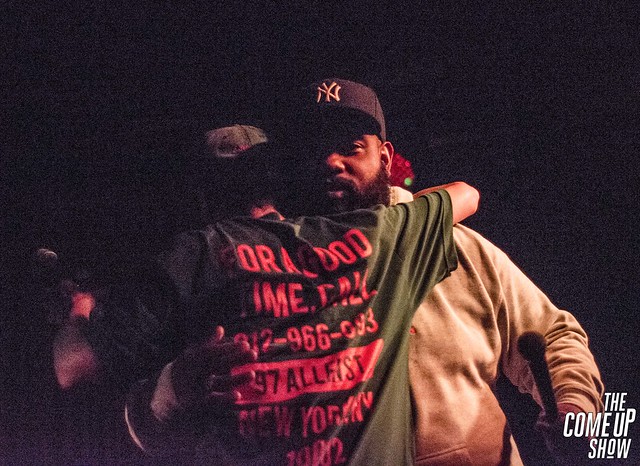