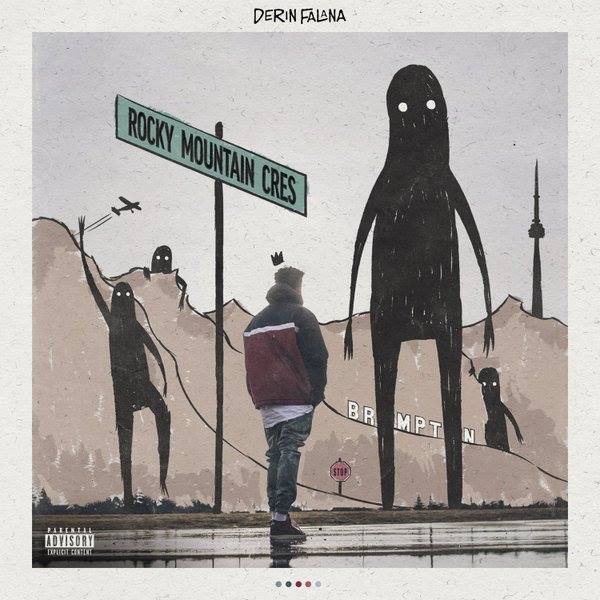 Brampton never fails to impress in terms of talent. Whether it’s Youtubers like Jae and Trey Richards, JusReign, or even rappers such as Pryde, there’s never a shortage of performance, and that’s no exception for Derin Falana. Derin’s been rapping for quite some time now and had his name in the mix for a while. Projects featuring local talent Pryde were never a shortage and the same goes for singles and personal projects. This holds true as he recently releases Live From Rocky Mountain, which is a nine track project that highlights the life and times of young Derin as he raps his way into a lifestyle he dreams about and make his imprint in the Toronto Hip Hop scene. As a long time supporter of Derin and his ambitions, I don’t doubt his skills for a second. The young artist continuously proves himself worthy with a mature work ethic, realistic goals and ambitions and incredible musical standpoint.

The project’s title and cover have a deep backstory all to themselves, as Derin shares on Twitter, he puts heavy emphasis on breaking out of his hometown of Brampton and experiencing the world for what it truly has to offer. Breaking out of a recurring cycle of normality and a mundane lifestyle and overcoming the fears and boundaries that hold us back as individuals and complicate our dreams. This project had been in the works for 2 years and touches on the positives and negatives of Derin’s life.
Another major aspect that Derin emphasizes is the artwork. The artwork, and the entire album in general, is inspired by the classic book Where The Wild Things Are, a compelling story about a young kid that travels to an unknown land and faces his fears of the ‘wild things’ and conquers the entire island. I assume this is correlated to Derin’s views of facing his fears and taking over his dreams and ambitions.

We recently had an interview with Derin and discussed his upbringing, the beginnings of his career, school, interests, his tour with John River and of course, his mixtape. We also discussed his recent name change from The Flan to Derin Falana, which he explains is an approach to maturity and growing as an artist. Coming out as who he truly is rather than a nickname or moniker.

Sitting at nearly ten thousand SoundCloud followers and over one thousand Likes on his project in just over two weeks of release, Derin is undoubtedly making his mark in the scene and is here to stay. This is just the beginning for him and I’m always eager to see what else is in store.