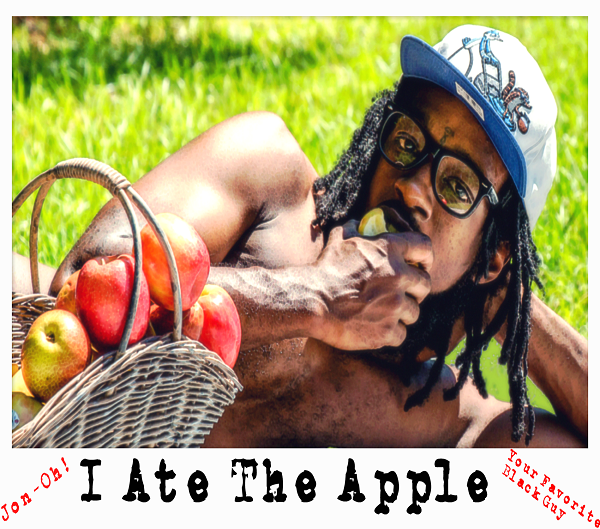 Brand new album from Jon Oh?! titled Ate The Apple. You can purchase on iTunes and stream on Spotify. Jon Oh?! has a unique story to share get to know him more in his write up below.

Destination Sought
With his mother going into labor no more than thirty minutes after 12:00 am December 25, 1985 “Jon-oh” Jonathan Scott, without even knowing it had the makings of someone special. With a well renowned hairdresser/fashion designer for a mother, and a father of the same status barber/drug dealer, you could say, “He was natural born hustler”. With his father fleeing the state an hour after his birth, (due to impending drug charges) Jon-oh had no choice but to look up to his older siblings for guidance. Once he saw that they were trying to crash the music scene he quickly picked up a pencil and pad.

“I was fascinated by the ciphers, conversations about studio time, and when I heard them on tape for the 1st time, it propelled a young player.”

He started writing songs in elementary school, and in middle school Jon-oh had started recording him-self to cassette tapes and passing them to anyone who cared to listen. When he reached high school Jon-oh got together with peers, one of whom was his 1st cousin and began recording EPs in his cousin’s bedroom; once again slanging ’em across school. Through hard work and determination, Jon-oh managed to have a full-on recording studio by the age of 19, and recorded local artist and musicians as well as himself.While everything seemed to be coming into play, life behind the music was exactly what it depicted, a struggle.
Jon-oh worked multiple jobs, sold drugs, CDs, and studio sessions to keep his mother, as well as himself afloat. Jon Oh suffered from several run-ins with the law, brushes with death whilst trying to keep up with his hectic lifestyle; money, of course, was a necessity.

“I hated to see my mother hurt or want for something, plus I had to have the best studio equipment, cloths, weed, etc. lol”

Nothing could ever defer, or stop him from reaching his goal though. Jon-oh decided to leave the streets where they were and put his full focus on his true talent. With the past behind him Jon-oh hit the studio and streets hard, but with music promotion in mind this time. Since he had lost so much time dealing with bullsh*t, he felt he desperately needed to compensate for it. Since he had always put his all into 9-5’s, and excelled quickly in any workplace, he figured he could do the same for self, and be as profitable… and he did just that! He put together his own promo material (CDs, flyers, posters, t-shirts) and began hitting local venues performing, and collaborating with other local acts to push his career forward. Seeing that he could only go but so far in his own city Jon-oh hit the open road with huge aspirations.

“I saw and studied successful independent rappers, took into account how they just basically pushed themselves to make it happen,and declared I’m next.”

Jon-oh tracks rap shows in the southeastern region, doing whatever he could to make attendance and perform. Some acts include Lil Boosie, Waka Flaka, Travis Porter, and King South to name a few. With his debut LP I Ate The Apple, Jon-oh is for sure to be the next big thing since auto-tune.