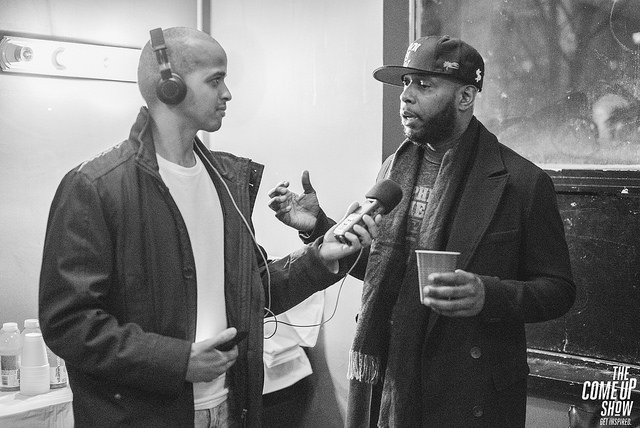 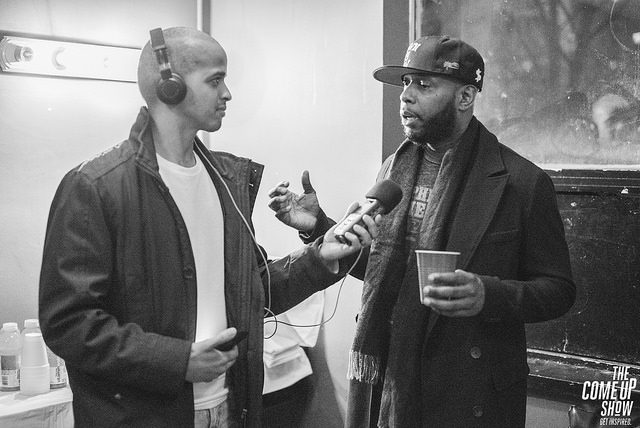 This week The Come Up Show presents our interview with artist, entrepreneur, and activist Talib Kweli. This is the second time we’ve had Kweli on the show, the first was with him and Hi-Tek as Reflection Eternal in 2014. This time around, it was on his 7 tour, after his concert in Toronto. I was hanging out in his green room with some of my friends, Talib, his DJ Spintelect, and some friends. We squeezed an interview with him just before his Uber came to pick him up.

In this interview, we talked about how music streaming is changing the game, what it was like to work with Style P and be featured on A Tribe Called Quest album, and why artists should never quit. Below is an expert, play the podcast to hear more.

The onus is on the artist

Chedo: When you first launched your website in 2014 you said it was an experiment. I was wondering how that’s being going for you.

Talib: It’s been going very well! Shout out to Ryan Leslie and Disruptive Media because they’re the ones who gave me the idea to do it. But kweliclub.com has been one of the greatest things I’ve started in my life…. It’s my store, my website, it’s where people come for me. The onus is on the artist to figure out how to get people to come for them. We’re in the age where people don’t buy music. Music is free, it’s in the air, we have Spotify, we have Soundcloud, and if you pay $8 or $20 you can get Tidal… Whatever you’re paying for streaming, you’re not paying the artists, you’re paying the corporation. People are not into supporting artists. People are still into coming to concerts and buying a T-shirt, but there’s a whole generation who grew up not buying music. Is it their fault? No, this is just the age they were raised in. So the onus comes on me to get people to come back. So kweliclub.com has been one of the greatest things, and it’s not like it’s hugely profitable. But it becomes a place where I can be independent. So even though I’m not ballin, but I can sell my wears. And I give them a lot of free music, but beyond free music we sell mugs, we also sell a lot of books… kweliclub.com is the one stop for all your cultural needs if you like Hip-Hop.

He didn’t want to come to the show

Chedo: You’ve been in this game for 21 years man…

Talib: I met a guy who was 21 who cut my hair today [laughter]. No, it was funny cause he was playing his phone, he was playing like Ty Dolla $ign songs, and I was amazed because he was perfectly okay with listening to these songs on his phone! I’m from a generation where we like speakers and we want to hear the base, but he was perfectly okay with it! While he was cutting my hair he was like, ‘you’re a legend’ and asking all of these questions. Then I asked if he wants to come to the show and he was like ‘um yeah I’m good’. He didn’t want to come to the show at all. He respected me, he knew about my music, and he was a Ty Dolla $ign fan… the reason I know this is because he was playing a Ty Dolla Sign song and I thought I was cool, and I was like ‘hey is that that new Future album?’ He said ‘Ah nah this is that Ty Dolla song from two years ago. The Future album is not out until next week.’ I said ‘I knew that’ [laughter].

Life is frustrating and everything is relative

Chedo: Can you share a moment with me where you thought of giving up music?

Talib: Where they do that? Quitting? Hanging up? I don’t even know what that is. Frustration? To the point where I wanted to quit? Life is frustrating, whether you’re a garbage man or whether you’re a rapper. It’s frustrating and everything is relative. While I’m privileged enough to recognize the perks in life, what I do is hard. It’s very hard to be your own man and entrepreneur. I would venture to say it’s harder to be an independent artist, than it is to work for somebody. To work for somebody you have to take direction, and instructions. It’s harder to say no and just be out here… and God bless artists and entrepreneurs, who take the chance. Most people choose to work for a corporation, because it’s easier to do. It’s easier to be a drone. It’s easier to take instruction than to be who you are and just be free.
Subscribe to The Come Up Show Podcast!