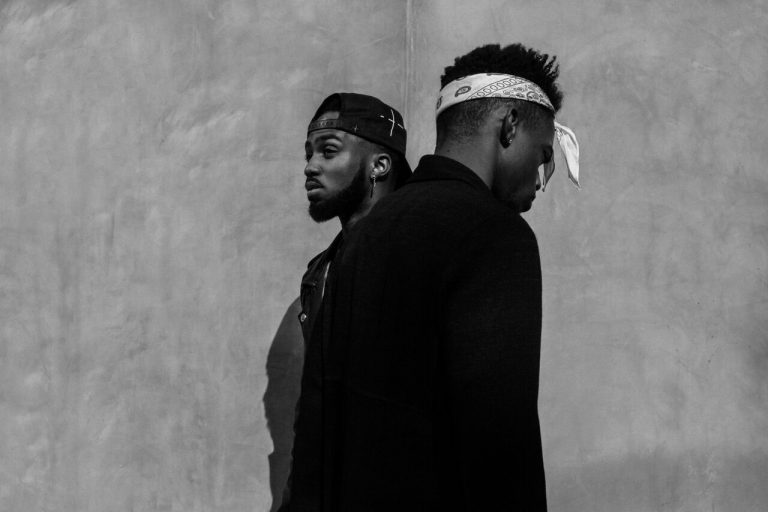 THEY.: It’s not always about being the most talented, it’s about putting in the most work 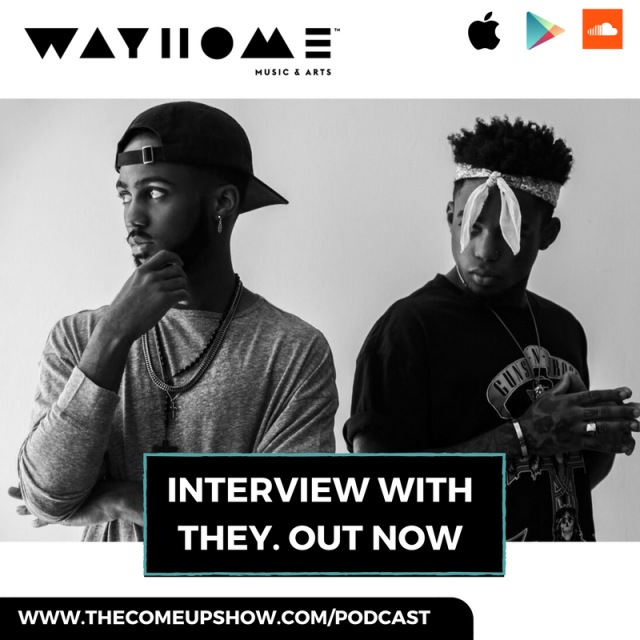 The Grammy wasn’t enough for musical producer and artist Dante Jones, he knew he had a greater calling. Which set him on pursuing his own musical career, “the Grammy, the plaques, and all of the awards I’ve won… are all in the closet, I didn’t want those to be the only plaques that I ever got,” Dante told Chedo.

Along the way, he met Drew Love who shared the same vision and both set out to create a new sound that would mark the tale of a new movement as THEY. It’s a Nü Religion, as they call it, a movement to embrace your individuality and to stay true to yourself. The musical duo first made waves after the release of their EP “The Nü Religion” which was a hit on Soundcloud and received support from big names like Timbaland. Their latest release “The Nü Religion: Hyena” has millions of listens on Spotify and Soundcloud. Now they’re on their first headlining tour after touring with Bryson Tiller and PartyNextDoor. THEY. will be making an appearance at the Wayhome Music and Arts Festival on July 28-30 alongside Frank Ocean, Solange, SchoolBoy Q, Russ, Danny Brown, Jazz Cartier, NoName and much more. You can find out more information and get your tickets now at Wayhome.com.

In our interview, we talked about the dangers of L.A., the concept behind Nü Religion, and if idols can be born out of this era. There’s a lot more inspiring things to be taken from this interview! Below are a few excerpts from our talk, play the podcast to hear more!

Drew: We’re in an era where there’s a lot going on in the world. There’s a whole lot to talk about and a whole lot to write about, and there’s a whole lot of different ways to go about writing about it. That’s why I feel like music is such a powerful tool and as a musician on a somewhat mainstream platform, you have a platform to really speak your mind and really influence the listeners… but it really irks me that we’re in a realm right now where in urban music you have super creative people but you also have the people that are kind of settling for that mumble-jumbo where they’re not really saying anything… they’re talking about their Ferrari’s and their diamonds and that’s all you’re life is about. This is something me and Donte shared when we met each other, we were both sick of that. We felt like we had the responsibility to get up and say something else. Even if we weren’t talking about super philosophical or preachy topic, but we were talking about everyday relatable topics but in a different way, and with better production….

I think individuality is the main thing behind the whole Nü Religion idea, and we want to influence everybody else to be as individualistic as possible through their music. We want people to look at us as an alternative to all of the other stuff that’s out there right now. Because we really do have things to say, and we really do have talent, and there’s a lot of people out there with talent that feels like they have to do what everyone else is doing because it’s a quick way to get the cash. But use your talent in the best way possible, be individualistic and take your time and really make art. That’s what music is supposed to be, it’s art. From start to finish, an album is supposed to tell a story and take you on a journey. I feel like some people kind of miss the mark and get a little bit lazy. But there’s a lot of inspiration in music nowadays and still a lot of tight stuff that’s out there.

Chedo: Dante, you wrote a letter that you posted online. You said, “Our idols are aging, this generation is hungry for new visionaries.” Can we have idols in this day of age where everything is fragmented or will they be personal idols?

Dante: I think that the notion that idols can’t be born out of this era is flawed. It hasn’t happened yet, and I think it’s because of social media, but I also think that it’s very possible, it just takes the people who are willing to put the work into their art to make them into the idol. Nobody intends to be an idol, nobody intends to be idolized, it just happens. Whenever you make something and it really resonates with somebody, they’ll look up to you…. We all have that power, we all have the ability to make something whether it be for tech, art, medicine, whatever it is, we all have the ability to make something. When I wrote that letter, that’s what I meant. It’s not a foreign concept that we can still ascend to those heights, we all can do it, it’s within us. We all have a gift that can make us a million dollars… and make ourselves someone to remember.

Urban artists in this era are being misrepresented [38:10]

Chedo: You also said in that letter, “I grew up in an era where an urban artist was an intimidating intellectual presence; a raw extension of black culture unafraid of the judgment that came with fame,” do you think that that’s true now?

Dante: I think that a lot of it is coming back… I’m also very aware of a lot of artists that are being propped up right now, I wonder what their intentions are for the culture. Whereas back in the day you had Tupac, Biggie, Jay-Z, or Nas. I’ve always looked up to Jay-Z, he was most people’s favorite rapper, but he was smart, he wasn’t a clown, he wasn’t a goon. Sometimes I question who’s propping up certain people….

Dante: We’re black men, you know, and there was a very long time that as black men in America we were portrayed in a certain way. As goofballs, clowns… that we didn’t have a brain and we were just there to entertain. I’m aware now, and I think a lot more people are more aware than they would let on.

Drew: I think a lot of those people that are propped up right now are sitting there and portraying themselves the same way that we use to get portrayed back in the day. They’re not utilizing their platform to make us look any better, they’re enabling those people to continue to clown our culture. Which is another problem that I have. You have a platform to really inspire and speak on some real topics but yet you choose to portray yourself in our culture in that way.

Drew: If you can think of the kid in your school that was bullied the most that would’ve been me x10. It got to the point where I fell into a depression, it was really bad. I tried to mask it so much my parents didn’t get a grasp of how bad it really was. So they thought everything was fine. So all throughout middle school and high school I was ostracized and tormented for a long time, and I never really knew why. It made me struggle with self-acceptance and it made we want to change who I was. Because no matter what I was doing, nobody was liking me, and I didn’t know why, like why me? But that’s one of the things music really clarified for me. It helped me figure out who I was. It helped me find my light, that’s why I hold it so dear to my heart, and when people are out there clowning themselves it really bothers me because music is [supposed to be used] when you really have something to say. You can really speak your mind as far as what you’re going through in your life to maybe inspire somebody else who might be going through the exact same thing… We have the power to influence somebody who might want to give up on themselves, to really change their minds. So that’s why it’s so powerful for me, because if it wasn’t for music then who knows…. It really helped me find who I was and gave me a second boost of belief in myself, and that’s what Nü Religion is all about. Religion at its core is something that you believe in, right? And the Nü Religion is to believe in yourself.

Dante: I had a little bit of success early on, and to be honest I was a little bothered that I had success that early and that I had to try and follow it up. I didn’t necessarily know how to follow it up… the Grammy, the plaques, and all of the awards I’ve won for the first few songs I made are all in the closet. I didn’t want those to be the only plaques that I ever got. It kind of bugged me for a while, to the point that I became very negative. When I got to the lower point in my career I felt like I was going to be defined as the guy who did the Kelly Clarkson song. Which is obviously a great accomplishment, but I always felt like I had a greater calling. There was a very specific day where the sessions weren’t coming in like they use to, and I had to ask myself am I honestly doing what I want to do every day? So I just kind of fell back and focused on becoming the best producer that I can be, but with a very clear voice. I wasn’t going to try and do this for a placement or try and do that, I just really wanted to try and work on my voice as a producer and make that my focus.

It’s funny because when I made the beat for “Africa” it was literally just because I was sitting there by myself because everybody canceled on me for the entire week. Because I was a D-Level producer as far as the industry was concerned. So I was just making beats for myself like I didn’t have any sessions. But it’s those moments that I’m grateful for because I wasn’t supposed to be doing that. I wasn’t supposed to be doing those sessions to try to make pop stuff. I was meant to be starting the latest foundation of where we’re at now. So that’s something that I would tell to anybody that’s going through a low point. All of the bumps in the road are inevitable, but if you continue to work on yourself and work on who you are as a human being, whatever your profession is, and remain positive about everything… you’re better equipped to handle the bumps, you won’t let it trip you up as much. You know it’s going to come, we hit bumps in the road all of the time but as long as you prepare yourself for them and keep a positive mindset then they won’t trip you up as much. That’s what I would tell our fans, and anybody that’s listening, to just stay at it, no matter what and know that not everything is going to work out but as long as you’re still moving it will continue.