Sean Leon: Your come up is the most romantic part of your career 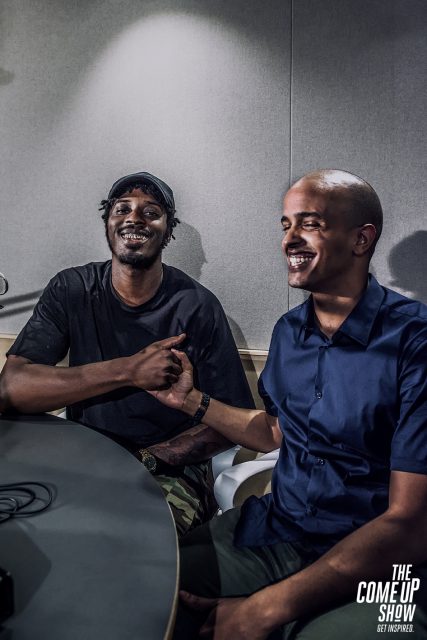 This week we have Toronto artist Sean Leon as our guest. Aside from rapping he is also a visual artist, dabbling in the arts of film-making and directing. He started out in 2013 with the release of his first mixtape “Ninelevenne, the Tragedy,” which featured production by Jordan Evans who also worked on Drake’s “Nothing Was the Same.” He had a second mixtape release in 2014, and started releasing singles up until 2016 with the release of his album “I Think You’ve Gone Mad Or (The Sins Of The Father)” which featured production by Wondagurl.

Sean Leon takes us through the lowest points in his career, his thoughts on promoting mental health in the black community, and destructing black masculinity. We discuss that and more in our interview with the “hungry” artist. Below is an excerpt from our talk, play the podcast to hear more.

Chedo: You said the whole “come up” is an important part of the film because once you pass that phase, you’re never going to come back to that and you’re going to miss it. It’s kind of romantic.

Sean: I think fame is cheap. I don’t think it’s as valuable as it once was 20-30 years ago. I feel like you should really appreciate your come up because it’s the most romantic part of your career, it’s the time you can talk to people one on one… you’re doing smaller shows in more intimate venues and you actually get to see the faces and touch the hands [of your fans], and getting that energy and having it reciprocated. Before you sign with that record deal, you’re making music purely out of the love. No matter how professional you are, or how much you approach it as a business, you’re still in a position where you’re completely free. once you sign a deal or something of that nature, then it really becomes a job. There’s a chance that once it becomes a job then it loses its appeal. The innocence and the purity of it is tainted because you know once you get a glimpse of this industry and how it works, it can be kind of sickening. I was learning that myself this year. So you really have to appreciate that time, you have to appreciate that time in your momma’s basement making music, or painting, or whatever it is you do. And appreciate it while it’s still yours and completely yours.

“I totally understand why people are losing their minds” [29:41]

Sean: Right now, a friend and I are organizing a panel to discuss hypermasculinity and mental health within men. I feel like it’s not a discussion enough, especially for black men. I just started noticing a trend, when I slowly started getting in the game and learning how things work, then I was like “I totally understand why people are losing their minds.” I totally understand why people are breaking down.I can see why things are the way they are. You wake up, see what happens, and you actually wake up to see the world for what it truly is. It can be depressing, but that’s why being an artist is such a blessing. Any negative in your life, you can flip into a positive because you have an outlet to express it. It’s why I choose music over basketball, for me, as far as expressing certain things that were difficult for me to get out, music was my outlet and I was so thankful for that. I think a lot of the problems in the world, especially in my community of black men, could be solved with a better understanding of masculinity and mental health awareness and fighting the stigma of it.

I don’t put music out and expect everyone to understand me [37:58]

Sean: I got my heart broken so much, I don’t set myself up for heartbreak. So I don’t music out and expect people to understand me. That’s ridiculous. I think it’s less crazy to meet somebody and marry them that day than it is to make a song and expect everybody to feel you. It’s not going to happen. There are people that are always going to dive in and look deeper. Then there are going to be people that don’t want to give you the credit or say you don’t have the capacity to even contribute something to society. They’re going to take it at its surface level and never dive deeper. It is what it is.

Chedo: But that’s based on their awareness, and where [the listener] is at.

Sean: Exactly, it’s completely external. It has nothing to do with who you are as a person. I’m seeing a lot of people who are curators, who are controlling what new hip-hop is being projected to the masses don’t actually give a f*ck about hip hop. They tolerate it. Especially this new sound and this new era of music, they don’t even acknowledge it. Like it’s not even a real thing. These are the gatekeepers that are controlling whether or not you’re on the front page of apple music long enough to get people to think you’re a big deal. Because it’s not about the quality of the work, it’s who you know. But if you can have a really great product and know somebody at the same time too, that’s when it explodes. Until then, it could go either way… Even if the game isn’t fair, I’m going to figure out a way to win.

Attachment is the root of all suffering [45:15]

Chedo: You said you have a lot of people in your life, but you’re willing to suffer and be lonely to achieve what you want to achieve.

Sean: That’s the premise of the next project: attachment is the root of all suffering. So now I have this thing that I’m completely attached to and didn’t have this before [my daughter] was born. I was attached to the idea of her when her mother and I decided to have her. But having her now, and the more we grow together, that statement really wrenches true. Attachment is really the root of all suffering. The hardest part for me is going away and hugging her through face time versus hugging her at home.

Sean: Right before that frustration, or right after, there’s a breakthrough every single time. When you’re an artist you chase the breakthrough, you chase the catharsis that comes with that. That’s what I’m after, that new perspective, that new clarity that only gets when you’ve hit rock bottom. That’s how I view it.

As for the lowest point, there’s been a lot of tough times. When I had my daughter and our ends were low, and we were homeless and living at a friends house. The mother of my child and my daughter were living in her room. That was a really tough time. That was before the record was done… it was a completely different time, we had absolutely nothing. But even now we’re not even satisfied, and even if we had 50 million we wouldn’t be satisfied. It’s like I eat and I’m full for 15 minutes. That’s the perfect analogy to describe that.