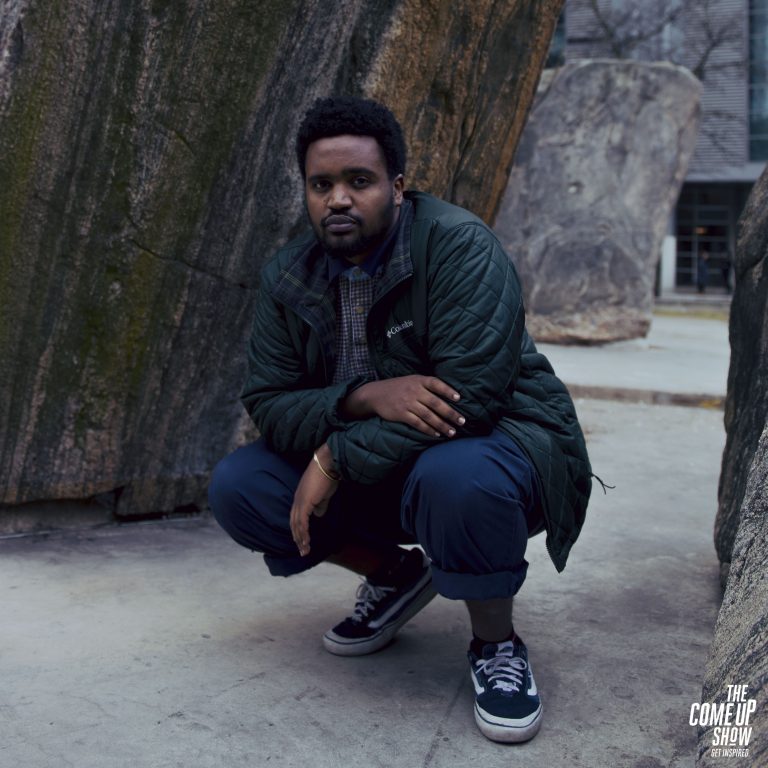 Emanuel: I make music to connect with people

Hailing from London, ON., Emanuel joins us this week on The Come Up Show! For those who don’t know, London is where The Come Up Show started so he and Chedo had a lot to talk about. Emanuel is one of the many up-and-coming stars from his city, and he’s optimistic about watch it grow. “You want to be that person from an obscure place that made it huge,” Emanuel told Chedo. “Dope people come from small places.”

Emanuel’s music is a fusion of Pop and R&B, with comparable sounds to The Weeknd and his idol Frank Ocean. His hit track “Medicine” has thousands of listens on Soundcloud and it was produced by London-based producers Bedrm and JesG. Emanuel is going to be performing at our 10 Year Anniversary concert Thursday, November 30th, at Adelaide Hall. You can find more info and get your tickets here!

In this interview, Emanuel talked about his upbringing and his Ethiopian roots. Emanuel talked about the “euphoria” he feels when he’s on stage, how music brings people together, and why he’s optimistic about Canadian music. Below is a transcription, play the podcast to hear more!

[06:54] My grandfather would sing to his cattle

Chedo: How did music come into your life?

Emanuel: I think it’s generational. My grandfather was a farmer and he would sing to his ox, cattle [in Ethiopia]. The animals would work better because he would sing them lovely tunes. My mom sings also, my dad couldn’t sing but he loved music. He introduced me to music as a young child, he loved Bob Marley and a lot of Motown stuff.

Chedo: Wait I have to bring it back to your grandfather… His cows or cattle would work better when he sang to them?

Emanuel: [Laughs] Yes! They had the old system of having two cows hooked up to the machine that plows the fields. So when he would sing to them, the animals would work harder and better. It was a happy job, it was a happy life for them. That’s why I think the seed was my grandfather. He was a priest too, so people in the community would come to hear him sing. He was the musician in the town I guess.

Emanuel: When I’m doing shows it’s the greatest feeling ever. I get so amped. If I’m dead and I do a show, I’m awake and ready to do another show right after. It became a true love thing…. I get so nervous right before walking on stage, but once my name is called I go crazy. I just get on there and all of the nervousness leave and all of the negative emotions leave. All of the bad vibes leave when I’m on stage, and I find myself in a place where I’m just vibing and people are vibing with me. I’m not terrible at communicating with people, well I am on a personal level, but being on stage is just so raw and honest and people are able to make the decision if they like it or not…. I just feel the most euphoria when I’m on stage.

Emanuel: I feel like music is so powerful. I feel like songs and anthems are the things that spiritually drive a nation. It’s what brings a nation together during hard times. The things that people do when they’ve gotten to a place of peace and togetherness after hard times, you’re going to see people dancing, and singing. It’s that togetherness… It’s a complete gray area too because the world is crazy. So when I’m with [my band] and there’s one guy who’s from Europe, I’m African-Canadian, and these places are so far apart that there’s no reason we should be having so much fun in a room together. But the X-factor in that is the music, so we’re just trying to have the most fun making music…

Chedo: How does it feel to be a Canadian musician? What does that mean to you?

Emanuel: I feel like people are ready to listen. It doesn’t take as much promotion to get the attraction. People are saying “Oh, The Weeknd is from Canada? Does Canada have more artists like this?” So yes, I think this is a great time for Canadian art. You’re a lot more optimistic and closer to the world community of music. But at the same time, the optimism is almost like a sham. The optimism is real now because of what’s going on in Canada and how many artists are that are getting real pushes, but at the end of the day, it has to come from the heart. It’s good for the economy since you’re putting money into music, and it helps to have a bigger culture. At the end of the day, I feel like real art needs to come from the heart.