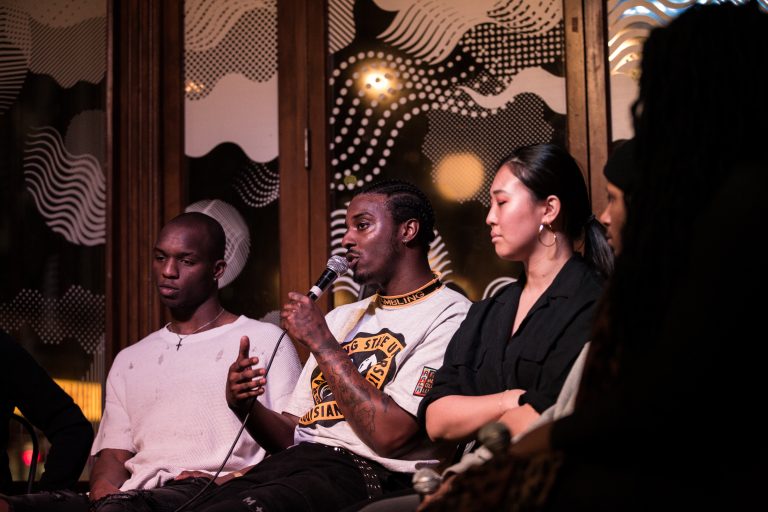 While discussions on mental health have made strides in recent years, there’s still a lack of consensus in minority communities. The conversation is even more obscure for creatives of colour, especially in Toronto. Toronto Tastemakers hosted a panel discussion on how minority creatives deal with mental health. The talk included Sean Leon, a widely known Toronto rapper, Amy Hosotsuji, a community outreach organizer for equity, healing, and the arts, Malcolm Omoruyi, an upcoming male model, Jodianne Beckford, a prominent local photographer, David Forteau, director for World of Dance Canada. Chedo moderated the panel, and we’ll be airing the talk for this week’s episode.

The panelists talked about the meaning of self-care and how hard it is, how to not let the competition exhaust you, and how to make money when you’re starting out. Below is an excerpt from our talk, play the podcast to hear more.

Sean Leon: Let’s say I get 100,000 plays on [a song], and I uploaded it from the basement myself, made the artwork, did this thing. Then I scroll down and Drake got 100 million plays on a song in the first day. If I’m comparing the success of this work based on numbers I’m going to be crushed every single day. Every day is going to feel like a punch to the gut. We’re playing a completely different game, we have different tools in a different situation. I try to preach to people that we’re not in competition with anybody. I try to look at it like we’re in the arcade at the movies like we’re street fighters. There’s player 1 and player 2 and then there’s the system. All that ever matters is how you’re performing in that system, that’s how you get your name in that game. If you’re playing and the other player beats you, you still won because now you have more experience in the system. If you beat [the other player], then the lesson in there is keeping your ego away from the victory because it will block your heart and it will make it difficult for you to get better. It’s really about the system… There’s nothing to compare, no reason to compete.

Chedo: You said you were working 16-17 hours per day, not getting paid anymore because you felt like you had to take care of these people. How did you take care of yourself at that time?

Amy Hosotsuji: I didn’t, I’ll be honest. But from that experience then I learned because I just burnt out. My flame was done, I burnt out completely. Also, my own trauma started coming up. That’s why I had to seriously, seriously stop because I was giving my blood. I was killing myself for it. It was pure martyrdom. It was not healthy for me to be doing that, so after that, I found a therapist for myself… I did group therapy as well as individual therapy and I went through my whole childhood and everything I’ve ever gone through with her. It was amazing, I didn’t go through all of that then I don’t know where I would be right now. It was tough. You know how they say you have to get through the dark tunnel first to get to the other side, it is so true. There was a whole year I had nightmare 4-5 nights a week, I was on the floor, crying every night for a year. It was seriously the deep end. Now, through therapy, I’ve learned so much about self-care and maintenance. They keep telling you that self-care means going home and eating chocolate or taking a bath when you want to, but self-care isn’t about being glutenous because you feel like it. That is not self-care. That is an excuse to just do whatever you want one night. Self-care is really hard work, it’s actually doing the right thing when you know you don’t want to do the right thing. It means eating that damn salad even though you don’t want to have a salad. It means taking responsibility for something that you’d rather not take responsibility for. Self-care is hard.

Malcolm Omoruyi: Self-care means improving yourself in certain ways where you’re looking for improvements… it’s honestly learning about yourself and finding different ways to better yourself. That’s what self-care is to me as opposed to modeling or taking a shower, or working out. Self-care is deeper than that, it’s definitely working to be a better person, better personality, changing myself to be a better brother to my sister, to my mom, my dad. That’s self-care to me.

The work you do for free has to be mutually beneficial [18:00]

David Forteau: [In dance] I did a lot of free work, like 60 bar mitzvahs for free. A crazy amount just to grind. I can always accredit my talent and how far it’s brought me and my skill. For me, I take away what I was learning with one of my mentors because they had no time. They were booked all of the time. They were doing a gig every Tuesday, so I tagged along and I learned a little. Today I wouldn’t do that, I would just book him to teach my studio and my youth and learn on the side. Now I would still do free work but it’s got to be mutually beneficial. I liked to put myself in a scenario where everyone wins multiple ways… like what’s the next step of this transaction and how can we take it further. I feel like that to me is worth my time.

Jodianne Beckford: You see people’s work and you’re like huh. You know your work is good, but you [a competitor] and they’re just starting out and they’re getting all of these likes and followers. What I’m trying to say is a lot of people don’t know the difference between good photography and bad photography. Sometimes it’s frustrating. Some of the big names… I personally try not to look at their work too much because it can come into your work and you think you’re coming up with an original idea when you’re really not.