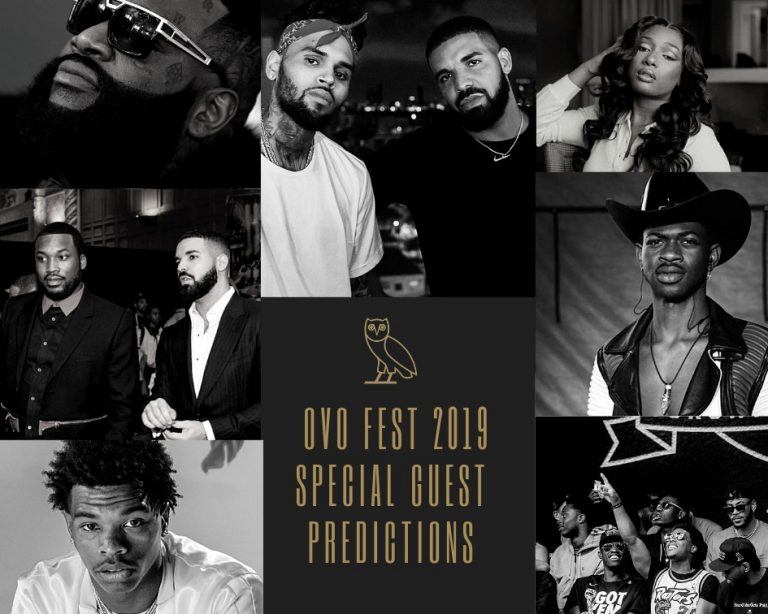 The Ninth Annual OVO Fest takes place at Budweiser Stage on Sunday, August 4th and Monday, August 5th, 2019. The first night sees a stacked lineup of The Millenium Tour with B2K, Mario, Pretty Ricky, Lloyd, Ying Yang Twins, Chingy & Bobby V – a very nostalgic lineup for the 90s babies, who will get to relive the soundtracks to their childhood.

The second day states solely Drake as the headliner, but is it really just Drake? Being the king of surprise guests, each year he brings out a roster of some of our favourite artists.  Notable guests from previous years include: Eminem, Kanye West, Playboi Carti, Cardi B, & Travis Scott. It goes without saying that there will definitely be some surprises this year. But who will Drake bring out? Here’s our list of predictions…

Lil Nas X arguably has the hottest single in history right now, with “Old Town Road”. The single just broke a Billboard record for being the longest running #1 single, as it’s spent 17 (!!!) weeks at the top. The city would go wild seeing him come on the stage. Who knows, maybe him & Drizzy could premiere an “Old Town Road” Remix?

Considering that Lil Baby will be in town playing Veld Music Festival on August 3rd, it’s very likely that he could make an appearance on the stage. This would be an opportunity for the two to play their hit single “Yes Indeed”.

One of the hottest and influential new female rappers, Meg gave the world the catchphrase of the summer, “hot girl/boy summer.” She puts on a mesmerizing performance, & inspired all of us to live our best life. Attending OVO Fest will be the highlight of many people’s hot boy/girl summers. Drake was also pictured earlier this summer in Vegas with Meg, so we know that a relationship exists – wouldn’t be a reach to have her as a guest!

Fresh off the release of his latest album, Indigo, which includes the lead single “No Guidance” featuring Drake. On the condition that he can get in the country, Chris Brown could be a possible guest for the night. We all know Drizzy can pull some strings.

Meek Mill & Drake finally squashed their years-long beef in late 2018, resulting in Meek’s huge single & collab, “Going Bad.” Meek also just got cleared of his probation last week, so he’ll finally be able travel out of the country. Chances are, we’ll see an appearance from Meek.

Rick Ross was a feature headliner for the second annual OVO Fest in 2011, and since then the pair have collabed on many hits. 2019 alone, sees features on some of  Drizzy’s greatest tracks, “Money In The Grave” & “Gold Roses.”

Drake brought out Cardi B at the 8th annual OVO Fest in 2017 to perform Bodak Yellow. She’ll be back in the city performing at VELD Music Festival that weekend, which makes it likely for her to come back and make a second special guest appearance.

The Toronto Raptors gave Toronto our first NBA Finals win in history. The city has been on a wave since the big win, and it would only be right to bring out the entire team.