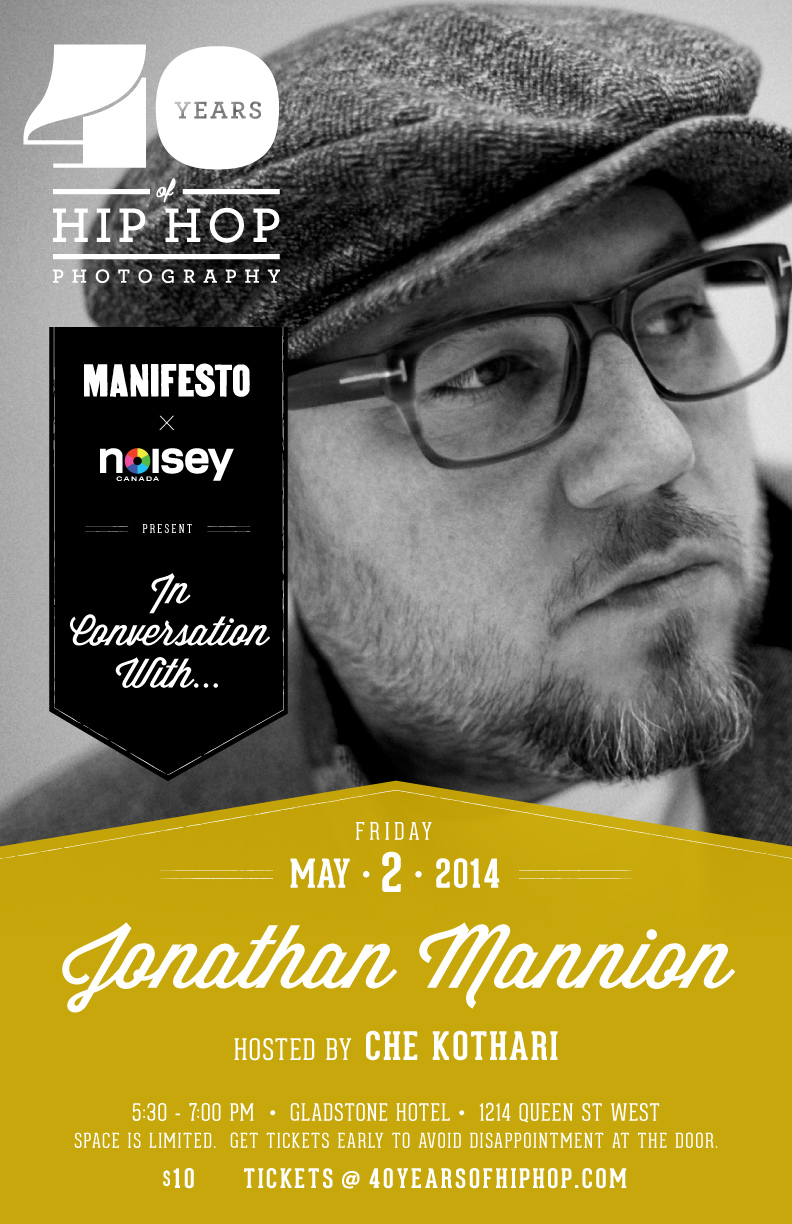 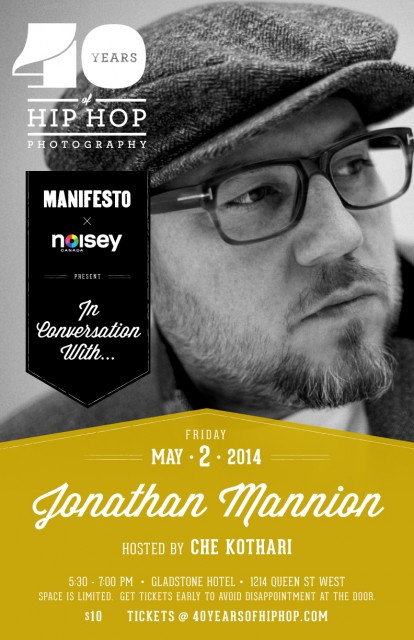 NOISEY, MANIFESTO and Chetan Kothari have collaborated to bring you Che Kothari In Conversation With… Jonathan Mannion on Friday May 2, 2014 at the Gladstone Hotel in Toronto from 5:30 to 7 PM. Jonathan Mannion is extensively known for his work in celebrity portrait photography. In Mannion’s words, "My goal is to create the definitive portrait of that person at that moment, every time I shoot." Take a look at the full details and ticket information below. What: NOISEY x Manifesto Present: Che Kothari In Conversation with Jonathan Mannion Where: Gladstone Hotel - 1214 Queen St West, Toronto When: Friday May 2, 2014 Admission: $10.00 + S/C | Tickets available online via EventBrite About Jonathan Mannion:

For over two decades, Jonathan Mannion has been an essential photographer whose lens has helped to define hip-hop and pop culture. Considered as a trusted visionary and master of his craft, he has produced some of the most iconic images of those who influence the genres of music, fashion, art, sports, and film. Mannion’s aesthetic is a multidimensional imprint felt globally through his groundbreaking images that are as unique as the subjects being captured. His work can be characterized by the ability to orchestrate a moment that exposes the subject’s inner essence and he consistently communicates their stories with authenticity, respect, and enduring relevance. Since the inception of his career in 1993, his vision and reach have expanded well beyond hip hop to encompass international campaigns, fashion editorials, and his directorial vision through music videos, documentary, and film.

About "In Conversation with...":

Manifest'o's "In Conversation with..." is an ongoing series that presents unique one on one conversations with people the organization and its community share reverence for. It offers a rare opportunity to go beyond the quotes and one of a kind performances to facilitate intimate and interactive dialogues with artists, activists, and public figures that offer a perspective that embodies the spirit and values of Manifesto. To date the series has featured the likes of hip-hop legend Ernie Pannicolli, Saul Williams, DJ Renegade, Kevin Powell, Joey Badass, Donisha Prendergast (granddaughter of Rita & Bob Marley), Jhene Aiko, and Yuna, amongst others.