The Come Up Show.com Presents – Classified

Chedo
Classified came down to Forewell Hall in Fanshawe College and I had the opportunity to interview him. We discussed the Oh Canada video, a new artist he signed to Half-Life and the new album Class is working on. Check out the interview and write up by Phillie from L DOT ONLINE below.

Photography by Danielle Da Silva and In association with L DOT ONLINE. 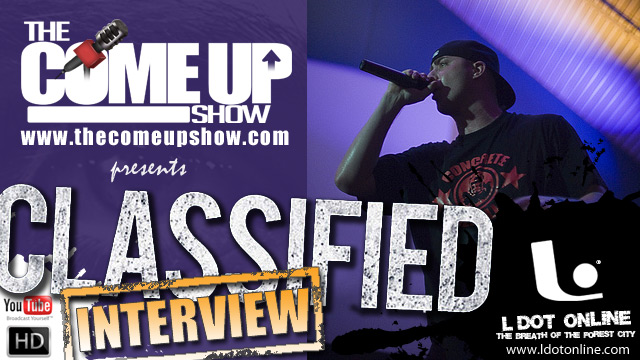 The Classified Chronicle Written by Phille from L DOT ONLINE When it comes to Canadian Hip Hop trailblazers, Classified has definitely paved a blazing hot path. As a prolific and engaging artist, Classified began his solo career in the early 90's in eastern Canada. Over the years Canada has proved to be a difficult market for Hip Hop artists to excel in, but over the decades Classified has carved his own niche touring the country (and overseas), facing many crowds, and putting out countless tracks, independently! Before signing with Sony Canada in 2008, Classified had sold over 40,000 records, produced 10 full length albums independently with his production company Half Life, and was nominated for a Juno Award in 2006 for Rap Recording of the Year; a feat achieved by few other Canadian solo rappers. His sound, style, and approach to Hip Hop is all his own stating he is, "a positive person with a negative approach," when it comes to voicing himself on the mic. While it isn't easy making it big in Canadian hip hop, Classified's grit, determination, and consistency have allowed him to carve out a life for himself and he’s slowly building a legacy of musical achievements. Recently, The Come Up Show’s DJ Chedo had the chance to interview Classified while he was in town. Chedo and Class spoke about a variety of things including Class’ new video for his hit song, “Oh Canada”. Check it out!

Chedo
Every year I do the best of The Come Up Show on the radio and 2009 was no...
InterviewsAudioVideos
·