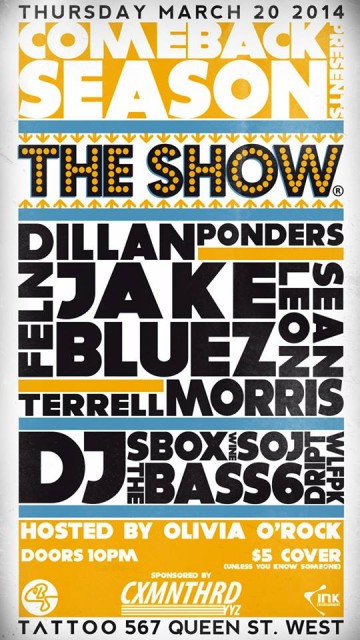 On Thursday March 20, 2014, Comeback Season Kids presents: The Show. Sponsored by Common Thread & Hosted by Olivia O'Rock Arezes, DJ SOUNDS will be provided by Trevor Harris - Dript, The Bass6, Sojourner Ramsay-Taylor - BoxWineSoj, and Liam Grebanier - WLFPK. The event will include 1-3 song performances from DillanPonders, Terrell Morris, Jake Bluez, Save Us Feln, and Sean Leon. Click the post to stream the artists' music and check out the full details after the jump. What: Comeback Season Kids Presents: "The Show" Where: Tattoo | 567 Queen Street West, Toronto When: Thursday, March 20, 2014 | 10:00pm until 3:00am Admission: $5.00 "But if you know someone, obviously you're good, just try not to bug the artist the day of the show for hook ups." THE GREEN ROOM | Sponsored by RedBUll "During their down time, artists will be lounging in the GREEN ROOM, which will be catered & filled with goodies! For entrance, you must be given a wrist band by an artist."
Events
·