King of Everything Else 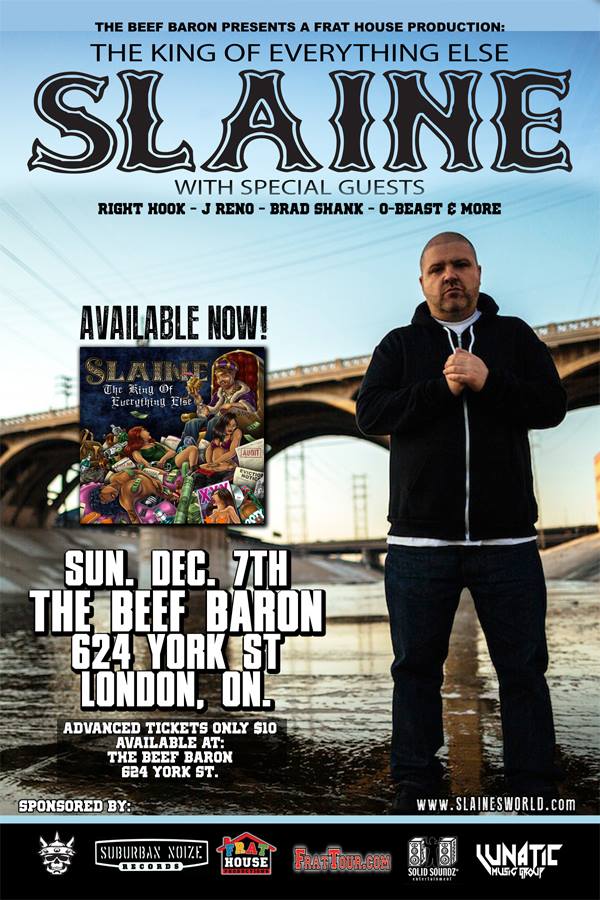 Sunday, December 7th - Slaine (known from the hip-hop group La Coka Nostra, movies such as The Town, Killing Them Softly, Gone Baby Gone) makes his way to London as one part of his tour here in Canada. His album King Of Eveything Else fresh in stores, and a brand new movie hitting theaters December. 5th - there will be plenty going on, as he screens the trailer for his upcoming film - "By The Gun". London's own and acts from surrounding areas start the night off such as O-Beast, SirReal, Ender One, Right Hook, Brad Shank, J-Reno The Sadist and more. Tickets are only $10 for a night of pure hip-hop. Prize giveaways throughout the night and more! Doors open at 8pm and there is limited seating so this event will be first come, first serve. What: The Beef Baron & Frat House Productions Present: Slaine Where: The Beef Baron - 624 York Street, London, Ontario When: Sunday, December 7th, 2014 Admission: Pre-Sale - $10 - Available @ The Beef Baron - 624 York Street, London, Ontario. *Also available through select openers in the event page *
EventsListing
·